hay, i am thinking of getting aerobars cuz i got a bunch of money for christmas and the headwinds around the beach are really slowing me down. the guy at my lbs said you cant put aerobars on cuz they wouldnt fit but i read some of the posts round here and they had put on aerobars. how would i get aerobars on?the clamp in the middle is only big enough to hold the stem. the other idea i have is to put the shim, which is longer than the clamp, in the middle of the bar and hold the bars that way.
like this(paint, duh) 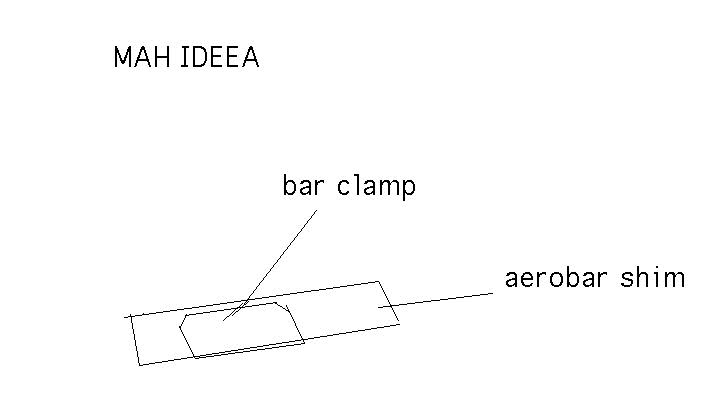 i have a mountain bike handlebar. slight rise. i was told that the aerobars could fit in the stem cuz it big enough, but my clamp is only big enough to hold the stem. i was thinkin of using the shim which is longer than the bar clamp and put it on the buldge to hold the bars

my main question is
Will aerobars fit my handlebars? How would i make it fit?

I'm not sure I understand darkmaster, perhaps if you could explain the problem a little more and I'll try to advise you. I've seen many flat bar bikes with aerobars so it shouldn't be a problem.
OP
D

well, my lbs said it probably couldnt work, because the buldge in my handlebar can only fit the stem. since the shim that comes with the aerobar is longer than the buldge, i could try to put the shim on the buldge and attach the bars that way

Hmm. Sounds like your LBS isn't being too helpful. I know you're a fair distance away but I Martin Imports bike shop near the Beverley Center in West Hollywood will have a big range of aerobars.

Location
Outside The Little Nibble

By aerobars you mean tribars?

I don't know about darksmaster, but some people do it because they can't get down onto the drops, or don't want them (as mad as that may seem to some of us).
In fact, many Dutch people put tribars on their big heavy bikes to have a smaller frontal profile when cycling into the wind...
OP
D

i dont have drops, or bullhorn bars. riser bars
You must log in or register to reply here.
Similar threads