Anyone use MythTV PVR software?

Anyone have experience of anything better (eg. less power hungry, faster). Preferably linux based, as I can't get XP to boot in less than 20sec.

Tried it out at one point when I was trying various PVR software. Bit of a nightmare to set up, but once set up it was fine.

HOWEVER ... it didn't seem to be capable of automatically identifying the very varied image ratios programs are broadcast in and mapped a button on my WMC remote to cycle through them, which was a massive pain in the arse.

In the end I went with Windows Media Center. Yet to find a better PVR, although a friend has one set up on a mac mini which is pretty snazzy,

Jezston said:
In the end I went with Windows Media Center. Yet to find a better PVR, ,
Click to expand...

It's been a few years since i tried any alternatives, but they all seemed to have something missing.

Then moved to Windows Media Center 2005, (XP), worked really well so long as set up right

Now I use Vista Home Edition, as Media is built in to the OS instead of buying the specific version like with 2005 version.

Vista works fine, doesn't need an overly powerfull CPU, mine has a 3ghz P4, 2 gig ram and a geforce 8600 (I think) video card, and I can turn the fans down to silent and it runs just fine.

The hauppauge capture card works with the inbuilt drivers, and the video card gives loads better results over SVHS than the 2005 version ever did. Not far off comparable to RGB direct from the sky box on my standard def TV.

The PVR guide is pretty good, 2 weeks with series record etc, but it gets excited and keeps recording repeats sometimes. I use mine with a sky digibox rather than inbuilt tuner.

Dedicated keyboards are cheap, it's simple to use and it passed the girlfriend test, she likes it.

It works great as an mp3 player aswell, is hooked into the stereo with album art on the telly etc whilst browsing, and doubles up as a dvd player or divx player etc.

Won't be changing any time soon, unless win7 offers anything different.

Win7 offers fancy 'wallpaper of album art' effect when playing music. Not sure what else!

Ran Vista MC for a while but trying to keep the ageing PC as low power as possible - it's an old Shuttle PC with a 1.8gHz Athlon underclocked to 1gHz - got in-use power usage down to 65W! But Vista is a little too much for it - browsingly the music library was horrendously slow, so I went back to XP. Shame to lose thumbnails, but does the job.

I tried the low power route with an ITX case and mobo - was a disaster, don't know if the cases and psu's are any better nowadays.

Ended up going the other direction, I bought a big stainless steel case with a flap to cover the drive bay and an LED display, it takes full size components, so got a silent psu, a silent heatsink for CPU, silent hard disk etc, much easier to keep quiet as wider range of parts available. The case was a bit dear but it looks like a hifi component so fits in quite well, just wish I'd had the black one instead.

Mines the middle one 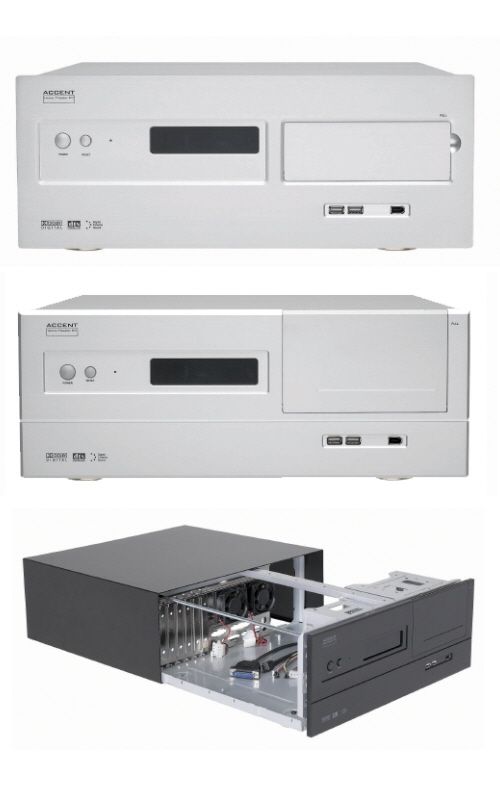 I have Windows 7 Ultimate which comes with Media Centre. It's very good and I've tried lots of alternatives over years and I also know how good a PVR can be (I used to have TiVo

). Surprisingly, even when recording a TV show I can still play Call of Duty or other demanding games with no apparent reduction in performance either in game, or the resultant recording.
OP
OP

I just realised that I have in on the laptop I'm using now (Vista - which was preinstalled and only used once!). Just had a try and it's okay.

However, as I only have an old XP Pro license, it does mean that I'd have to get a new XP Media Center / Vista Pro, Win7 for the old machine. Apparently you can't just buy media center by itself.

Anyway, after a bit of searching I came across MediaPortal, which looks the same as Media Center, seems to offer more functionality and customisation. And it's free! Gets good write ups too.

Still not sure about Windows in general though. I'm only using an old AthlonXP2000 cpu, 1GB ram

(that's all the mobo will take) and a Gefore2 video card. In Ubuntu 10.04 it can decode 2 and record 1 dvb-t channels simultaneously using about 75% resources. Which is fine, except that the cpu gets hot and the fans speed up and get noisy.

Maybe I need to get a better video card (with hardware h264 / mpeg-4 encoding) or find a better/quieter way of cooling the cpu.

In the meantine, I'll reinstall XP and MediaPortal and see how that goes.
You must log in or register to reply here.

U
Anyone used EasyEdit software?

Anyone a software expert?

Business plan software..anybody use it?