I remember it clearly and was only 12 at the time.

Remember coming in for my dinner and it being on the TV.

RIP to all that lost their lives.
L

aye....cant believe it has been so long. I was 12 too. I work in bingley..still live in bradford.

minute silence being observed at 3.42 and a some fund raising happening

It made me think of the number of wooden stands at footie grounds all over the country at that time AND people were allowed to smoke in them.

On reflection it's a wonder there was only one disaster.

Bad Company said:
It made me think of the number of wooden stands at footie grounds all over the country at that time AND people were allowed to smoke in them.

On reflection it's a wonder there was only one disaster.

Slightly OT, but when the King's Cross escalator fire (which was caused by a cigarette end) was investigated, they found evidence of seven similar fires which had burned themselves out before getting a proper hold.

I remember what I was doing...A sponsored cycle ride at Eastway Cycle Circuit Hackney.I did 36 laps which was crap.

The stand was a beautifiul, quintessentially British football structure, I miss it even now. Simon Inglis (author) described it as his favourite, "like watching football from a Sopwith Camel".

The roof was an iron/bitumen/wood canopy and one that had been leaking and bodged/patched for decades. The canopy and it's materials were perfect for a fireball. Underneath the seats were "kick panels", which would be lifted and (I assume) the litter/debris from match days, swept under. A little while previous I had attended a reserve game and was surprised to find a cat & kittens had taken up residence behind one of the panels. On May 11th 1985 as I was clambering over seats towards the pitch, I remembered them and was upset, silly really.

The stand was built on earth, on a steep slope, you entered the stand from street level into the very top and made your way down to the seats or paddock, as the fire took hold, people did the natural thing, I didn't, they went back to where they had entered, but the gates were now locked. 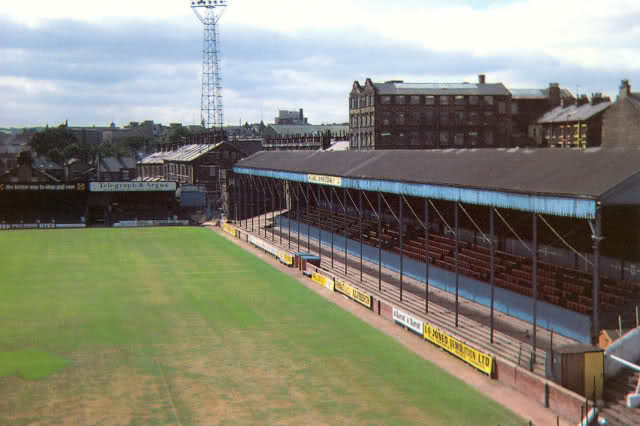 Are you saying that you were there Mark? My prayers are with you and the families of the 56 who didn't make it.
S

1985 was a bad year for football fans everywhere. A teenage Leeds fan was killed at St Andrews (Birmingham City) when a wall collapsed under the weight of too many fans going through a narrow exit passage on the same day as the bradford fire.
Just weeks later came the Heysel disaster, 39 fans went to a football match and never returned on this occasion.
RIP to them all

Yes, I was there and I went to very nice memorial service in the centre today.

I was supposed to go to that match, my first trip to a footie game, but me and my then boyfriend didn't bother in the end. My friend lost her grandfather, a guy a work's parents were both very badly burned and a lady in my village lost her husband and twin boys. My auntie worked on the ambulances and was called in to work to help out, she said it was the worse thing she had ever seen.

I worked for the local council and was roped in to do a stint opening the thousands of letters & donations that flooded in - people's generosity was humbling.

I've seen the footage a few times over the years. It's very powerful, I think the speed of the incident is astonishing.
Click to expand...

There's differing views on whether the footage should be available to view. Yorkshire TV wont allow anyone to use it, apart from fire services for training, but it's easily accesable on video hosting sites. I believe it should be available for people to view & let younger fans realise the enormity of what happened.
I was lucky in that during the mid 80s I had a Saturday job & couldn't get to the games. My brother was there & many of my friends but all were out safely.
My thoughts toady are with all those who were injured or lost loved ones during the tragedy.

On the return leg of a sponsered cycle to Blackpool & back. We got pulled over by the car that was leading the way/navigating & we heard it on the radio.

Afew of the younger ones, 10-11 years old, decided that they didn't hurt as much at that point as when they'd been stopped. Many did an extra stint.
You must log in or register to reply here.