Building a couple of 20" wheel tadpole e-trike from scratch

Hi Folks
This year we decided to build a couple of smaller BUT still full size electric tadpoles for our holiday .
The builds were a success and the trikes came on holiday with us , and performed perfectly . the main problem we had with our bigger trikes was that they were too heavy and just a bit too big to fit in the car or worse to lift onto the roof rack . With that in mind we built a 24 inch ( pedal ) trike first and that was just too big to fit inside for comfort . Then we were given a couple of 20" Kids mountain bikes and with a bit of adjustment of the dimensions we built the first of the 20/20 e-trikes , During the first build we eliminated some of the problems of a non-dismantable trike and with a bit of planning the first trike was born and used , before the 2nd build we were modifying the original trike and upgraded it . Left over were some of the original build pieces which were then built into the second trike ,
The trikes use 37v lithium batteries and the red one has a q100 motor but the black one has a ez-go Izip motor running 37 volts rather than the original 24v but the hub motor that was living in the rear of a 16" wheel is now living in a 20" wheel , the reduction in torque offset by the increase in voltage still gives a good performance in the rear of the trike .

The trikes would have front disc brakes and under seat steering and be able to be lifted by one person into the rear load space of a mondeo estate .

Both trikes were built from 40mm 16g square tubing and have solid seats rather than mech seats that take up a bit more room . 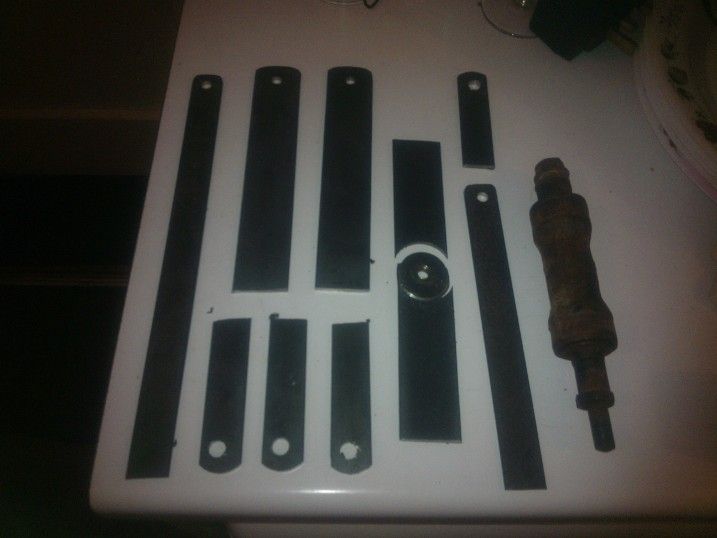 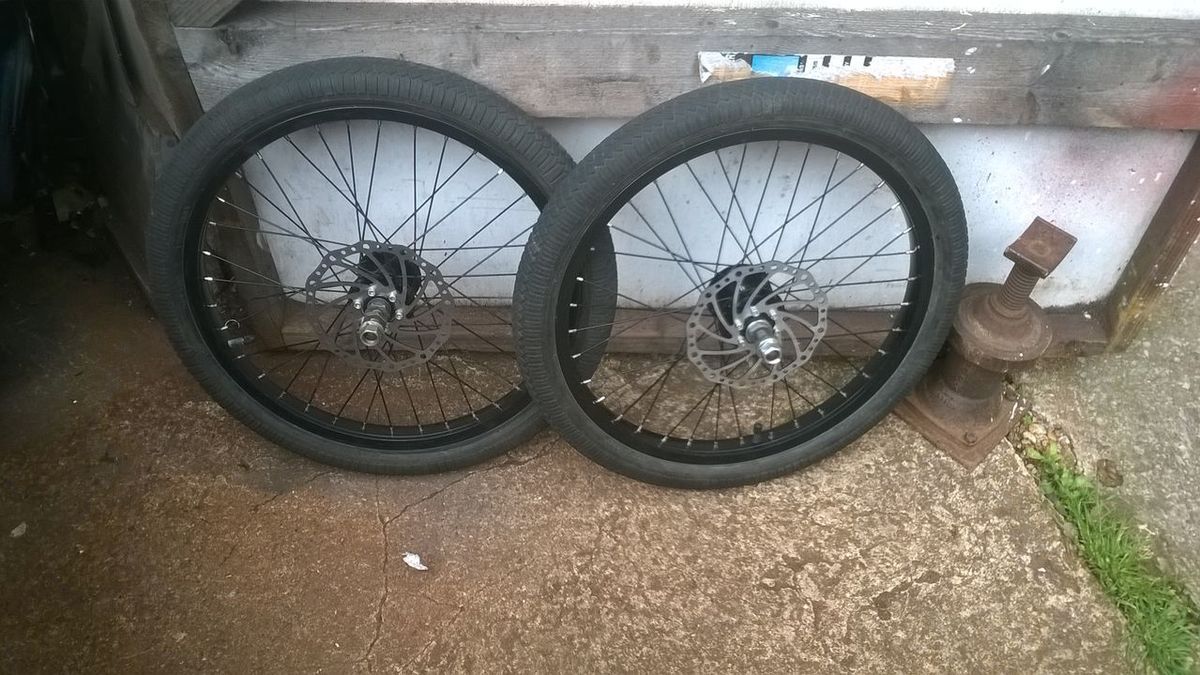 upload pictures online
once the little bits were cut and made it was time to weld up the frame , starting with the main boom and the 20" mountain bike rear end 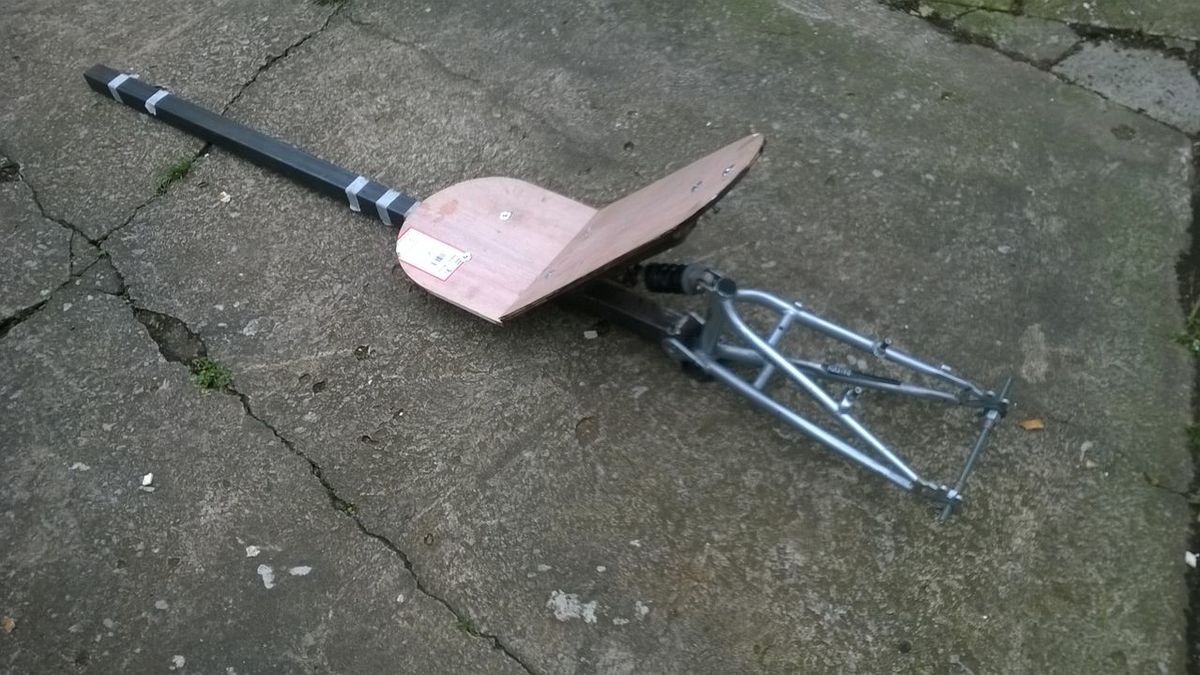 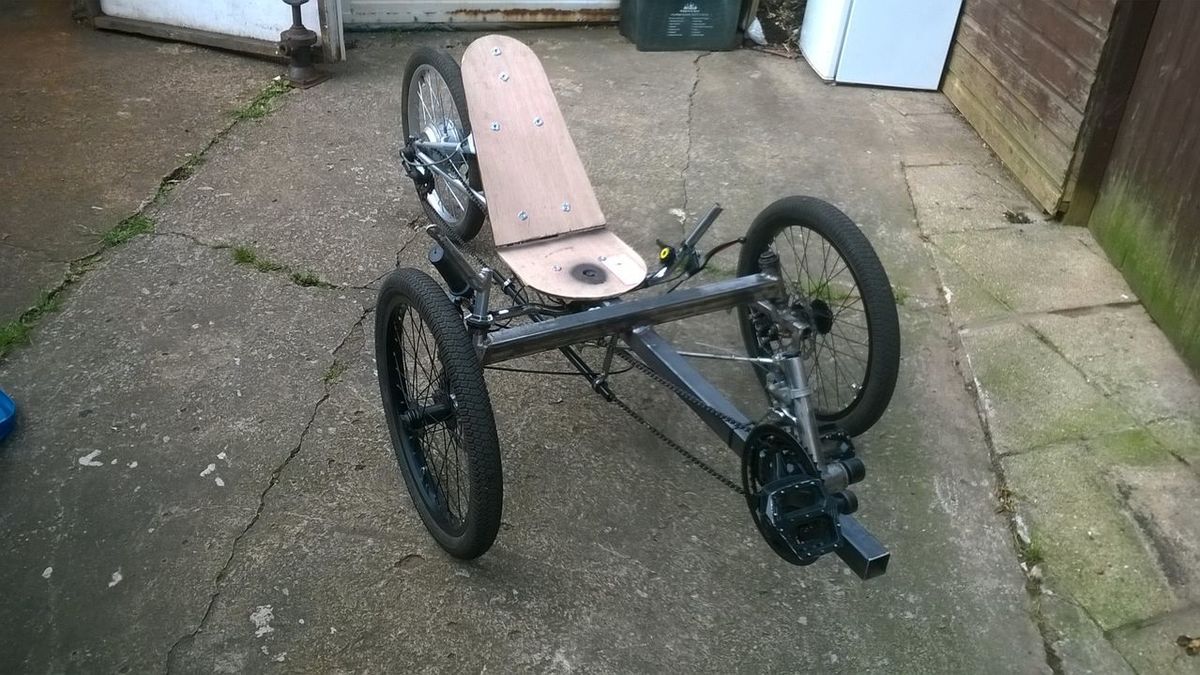 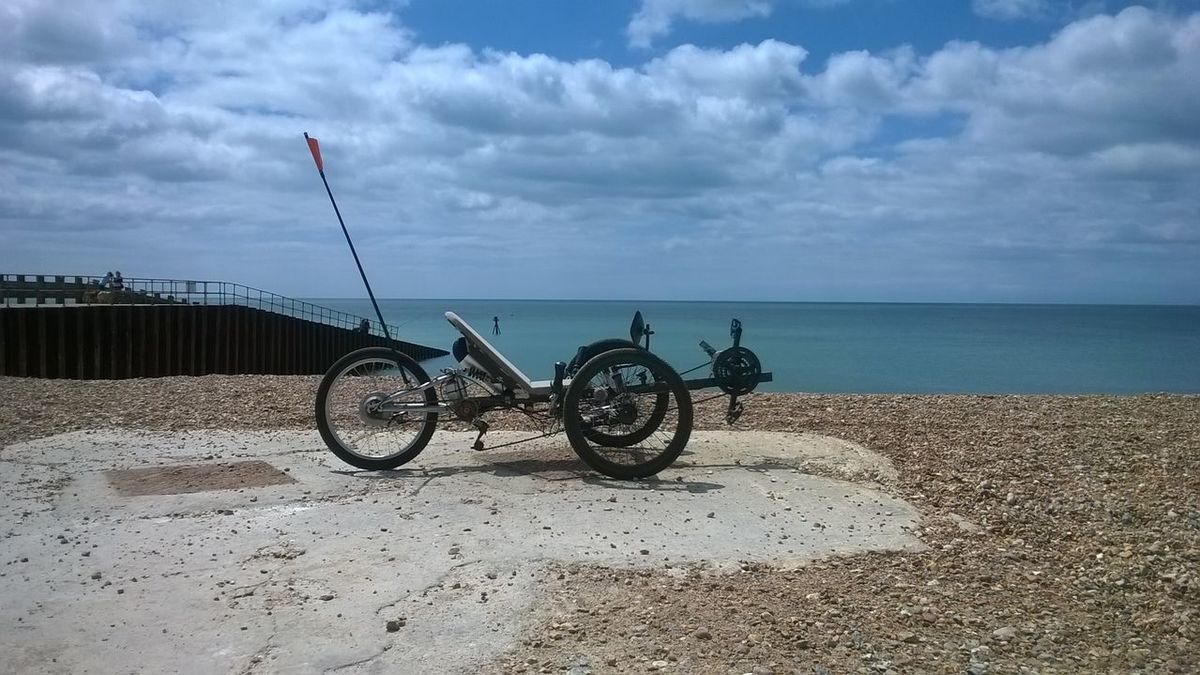 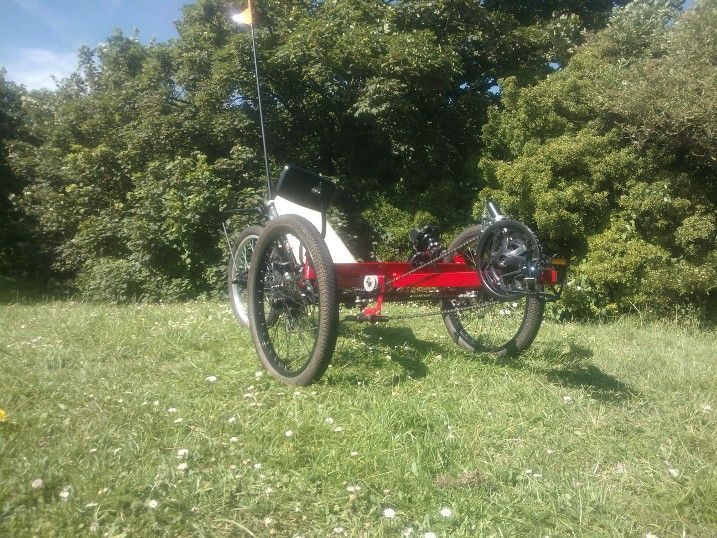 After the Red trike was sorted and fitted with a q100 motor the jackshaft drive unit and the rear end complete removed we fitted a disc brake to the rear and a pedelec sensor a 11-30 rear 7 speed freewheel fitted and the front rings remain with the 48-38-28 giving ridable gears from 16" up to 90"
the new controller runs up to 15 a on 37v and can be limited on mph / kph to the legal EAPC regulations but the trike is capable of 24 mph if the setting are set to max . and the range with the 9 ah battery is about 15 miles if used well .
The front wheels were also replaced with a set I had rebuilt with 32 hole 20mm hubs , These mods changed the colour of the trike as the white spokes complimented the cream upholstery .

The stealth E-trike came along a couple of months later, just in time for the holiday this used the black disc front wheels and the Currie motor from the original red 20/20 , and was fitted first with a set of SLA batteries this made the trike weigh just under 100lbs and it was imposible for me to lift it into the car or two of us to get it on the roof , so just before we left to go on holiday I transferred my spare lithium pack onto it . making both trikes weigh all up about 75 lb each , still a bit of a struggle to get it on the roof but I could lift it into the car on my own .( just ) 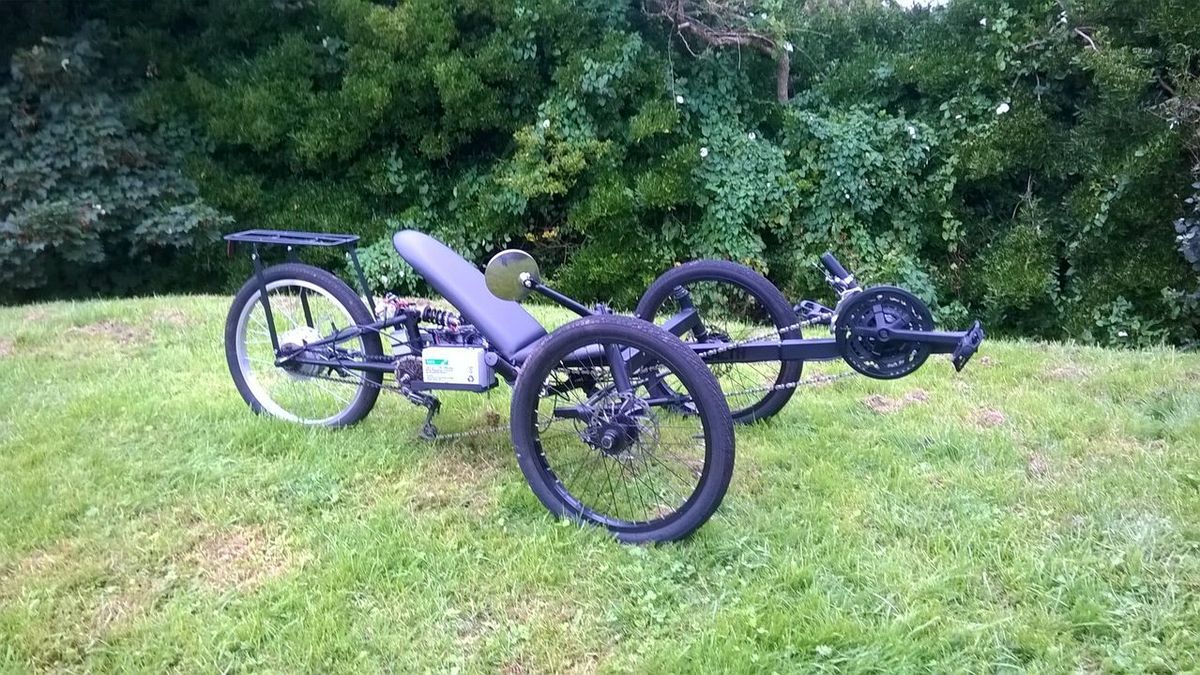 the matt black Stealth trike is built with the same dimensions as the red one but the handlebars are a different shape as Ken prefers the flatter bars
here is the first photo of the Stealth , The SLA batteries have a range of 15 miles , Since building the stealth I found out how to wire the controller links and derestricted with the Lithium 37v pack we could get 22 mph on the flat

With a couple of weeks grace before the holiday we got about 50 miles under the weeks of the stealth but as most of the bits were the discarded upgrade bits and the frame built to the same dimensions the trike did not need any more tweaking before we went on holiday.

In case you are wondering about the strange jack shaft drive under the seat , the currie motor has not got enough spindle to fit a multi speed freewheel so we adapted a 6 speed freewheel by removing the pawls and making a 4 speed block with a 21 t takeoff cog this made the gearing ( it drove a 16t on the rear wheel ) similar to a 26 " wheel ( maths 26/20 wheel size almost equals 21/16 cog sizes ) so with a 48-38-28 front driving a 14-16-18-24 rear freewheel that had a 21t drive to the rear wheel .

So that was the mad rush to get to hand built electric trikes ready for the holiday
Over the week they performed faultlessly and the caravan site manager was also impressed by my trikes performance when he road tested it for himself
with the holiday over its back to the routines of life and another couple of projects in the pipeline , a electric folding shopper and a transportable / dismantable tadpole that will fit inside the caravan . 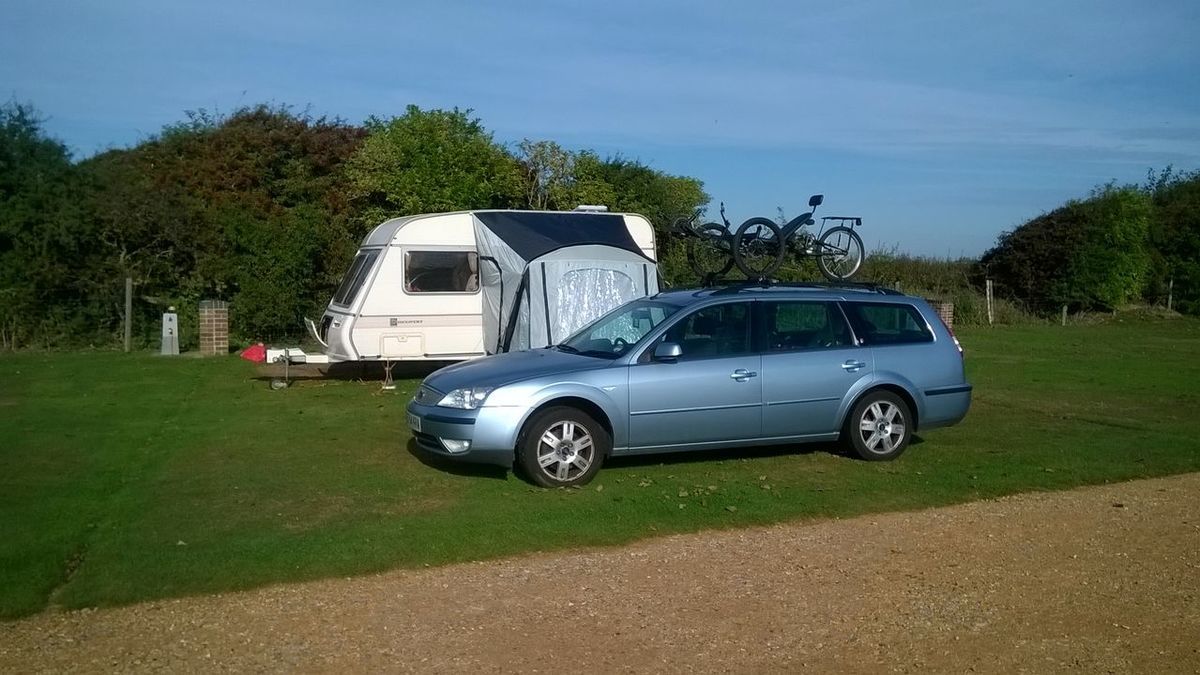 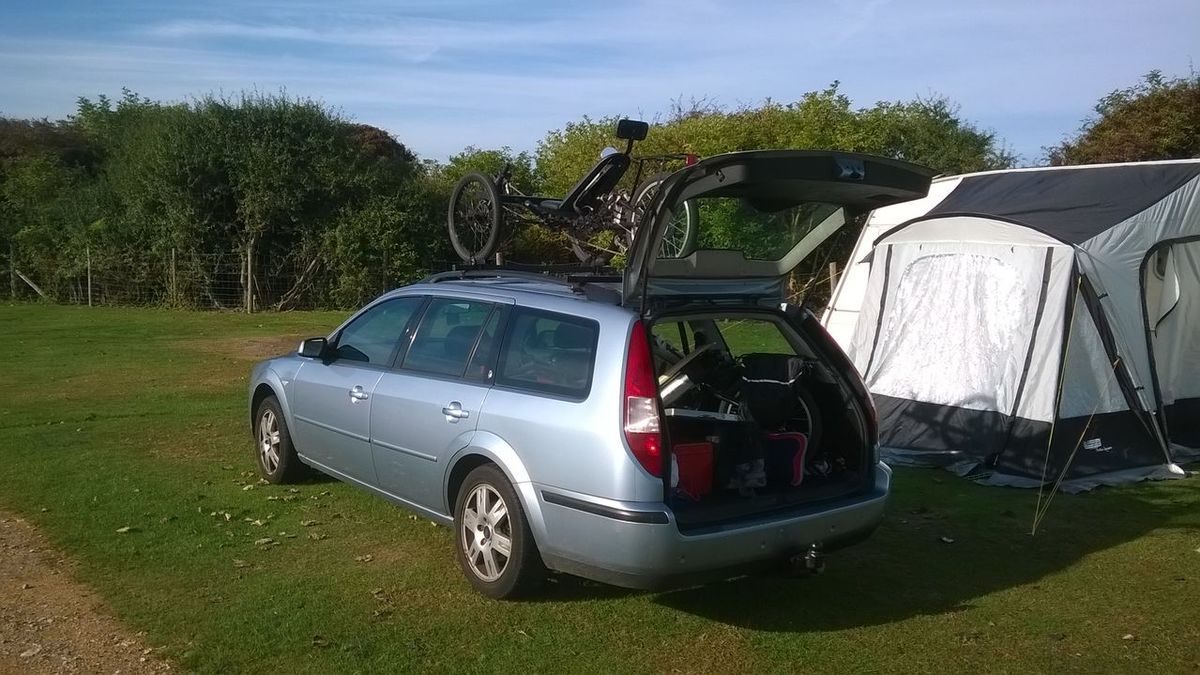 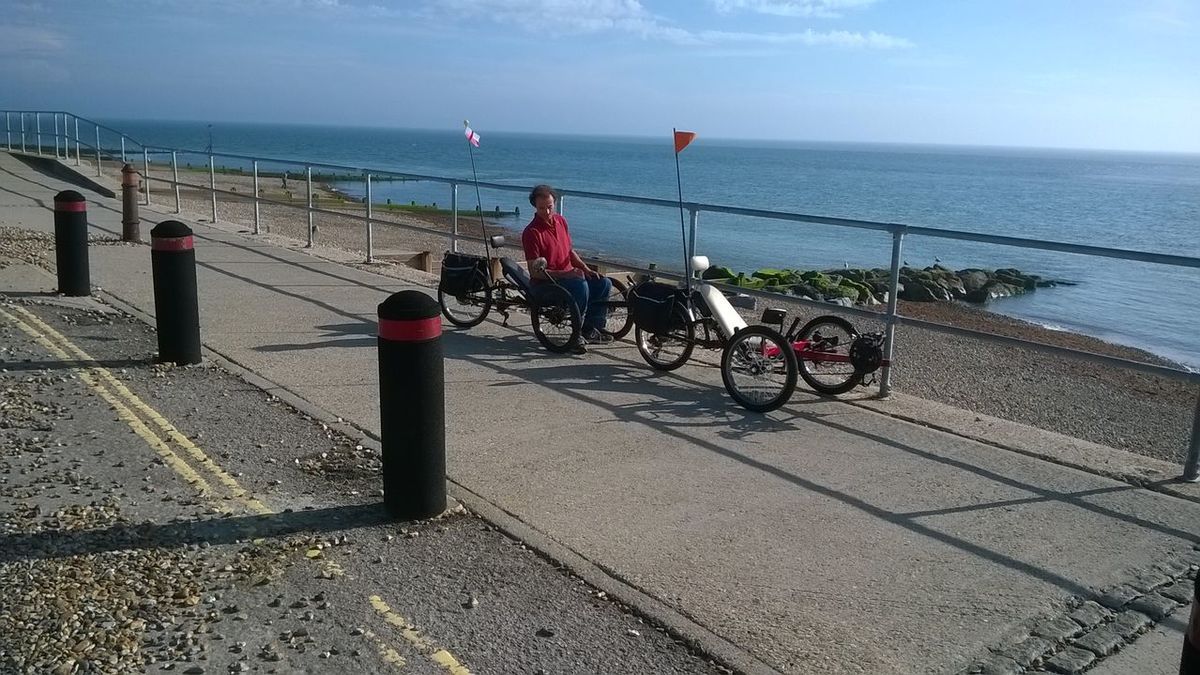 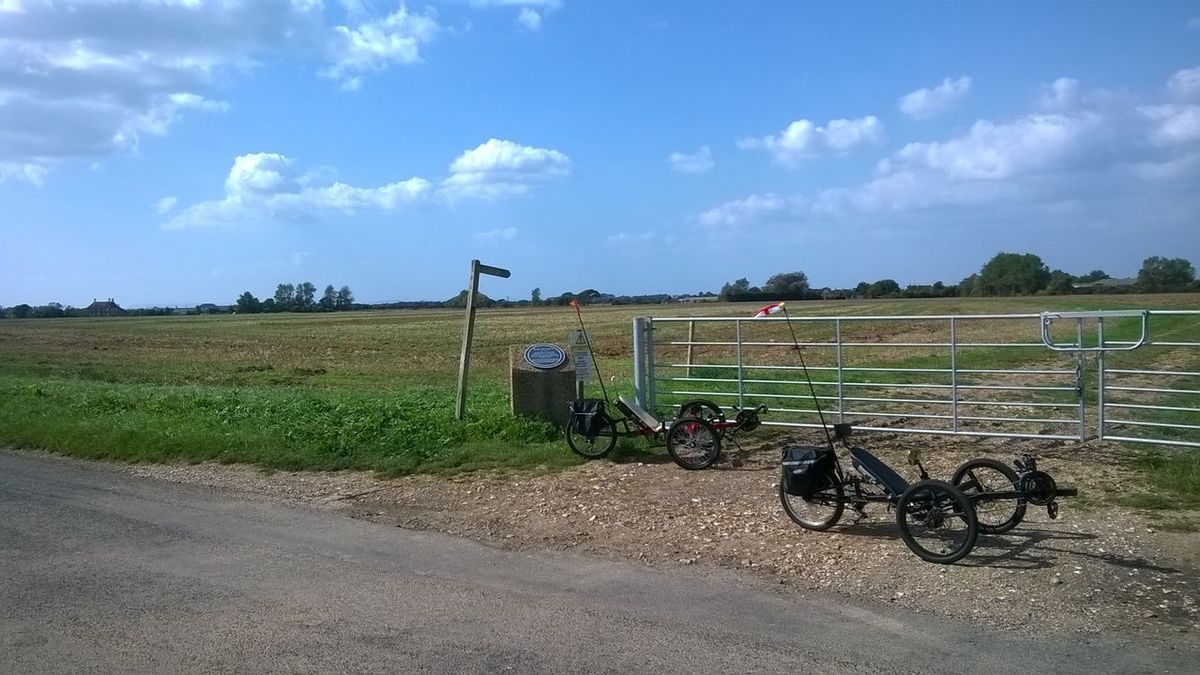 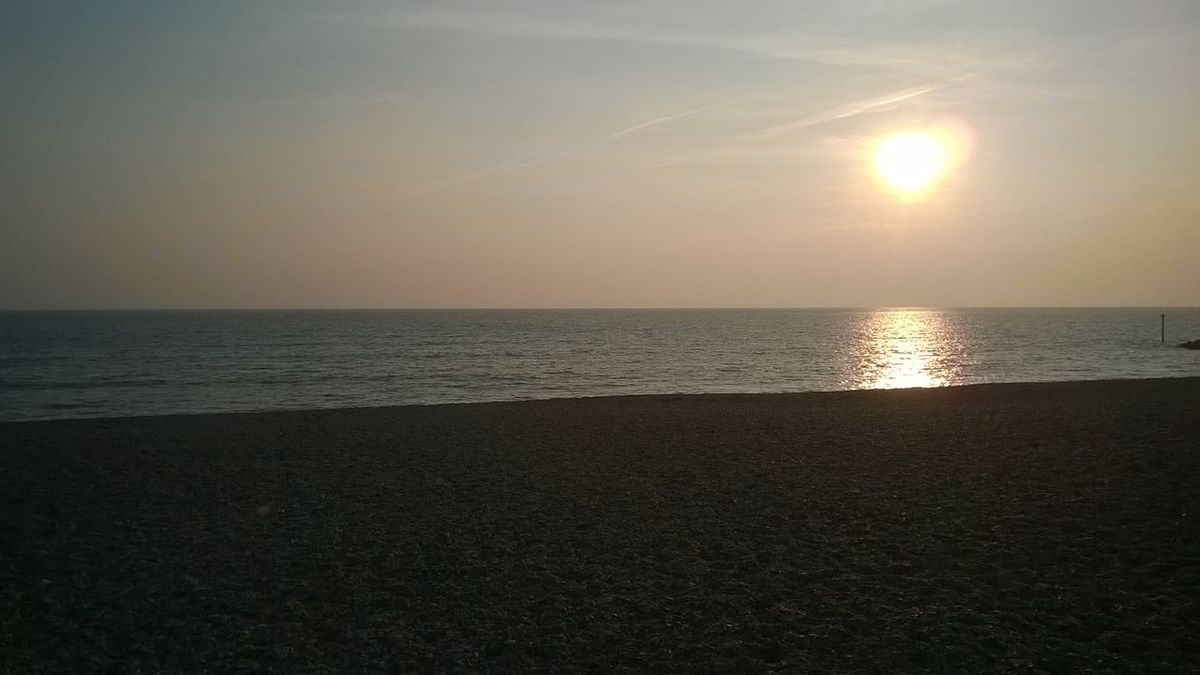 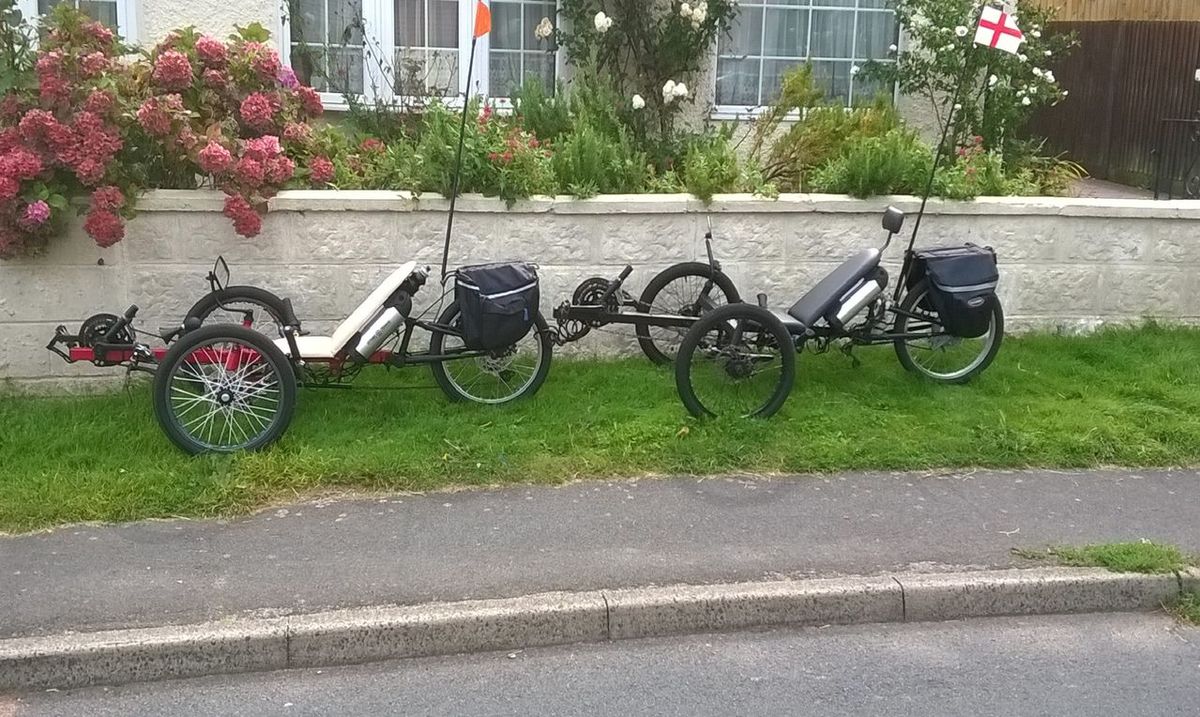 Great build looks like I have some catching up to do lol. You say you adapted the bmx front wheels to take disk brakes how did you do that ? I've been wanting disk brakes on the front but just can't find 20" wheels with larger axels and disks

stuee147 said:
Great build looks like I have some catching up to do lol. You say you adapted the bmx front wheels to take disk brakes how did you do that ? I've been wanting disk brakes on the front but just can't find 20" wheels with larger axels and disks

Rear large flange 14mm BMX wwheels can be used the right hand on is easy with a screw on adapter the left is a little more difficult the lefthand wheel ( Hence Large Flange ) need to have clearance holes drilled through the adapter and bolted through the rotor , adapter and hub .
PM me for details and I will send you the link to my thread on AZ

This was the thread on AZ I wrote that show how to use standard MTB and BMX parts to make a pair of tadpole front disc wheels .

There are other methods but I have used this method for 3 sets of wheels and we have also re bearing ed Ultimate hardware 10mm hubs with disc mounts
by boring the hub and making sleeves to fit standard ballraces and anticrush tubes , this method is more difficult and requires machining facilities but does produce a nice hub

@voyager - Very nice and some interesting engineering going on !

The lower jockey wheel on the stealth trike looks very close to the ground - do you have any issues when going over speed bumps or other rough bits of 'road' ?
OP

The lower jockey wheel on the stealth trike looks very close to the ground - do you have any issues when going over speed bumps or other rough bits of 'road' ?
Click to expand...

Its about 2 " off the ground but it varies depending on the gear its in , This is the problem with the 20" rear wheel trikes ,But they fit in the car
haven't had any problems except you have to lift the trike higher at the back if you don't want tram lines on the roof of the car .

The jackshaft was a "novel " idea beat around by three of us on another forum , but it works its only a 4 speed totally freewheel as the 5 th one went as the space and bottom gear swapped around is the drive to the rear hub . No problem to date and the jackshaft has done 400 plus miles .

Hi Folks
Got a few bits done this weekend despite the rain,,

, We resprayed the front of the all black trike in blue ( it got a little scratched whilst on holiday ) and refitted the original 12ah SLA batteries , all road tested and good and IMHO the blue is better than the all matt black look

,
Problem we have now 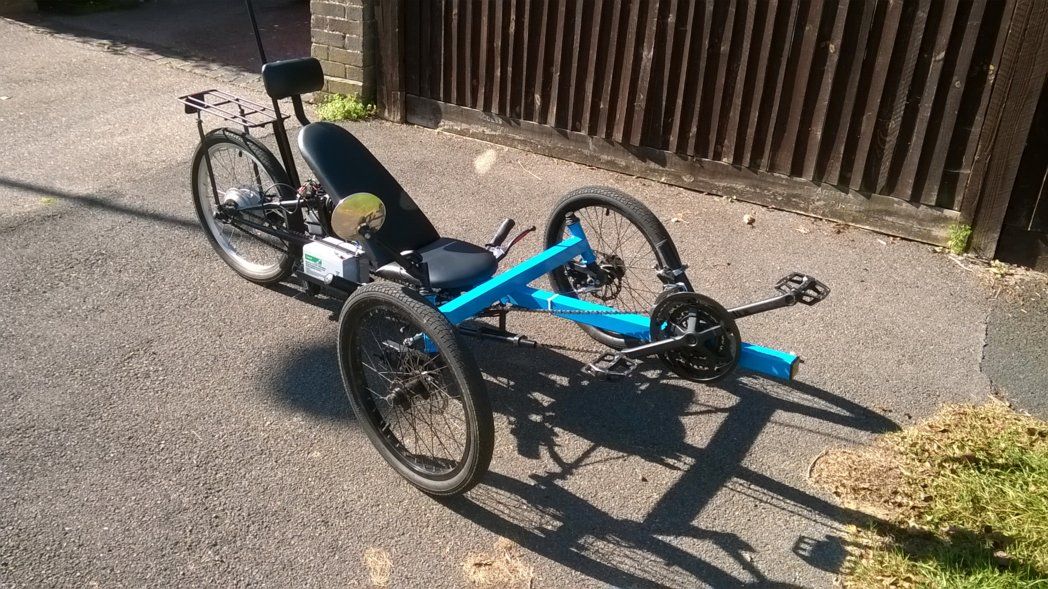 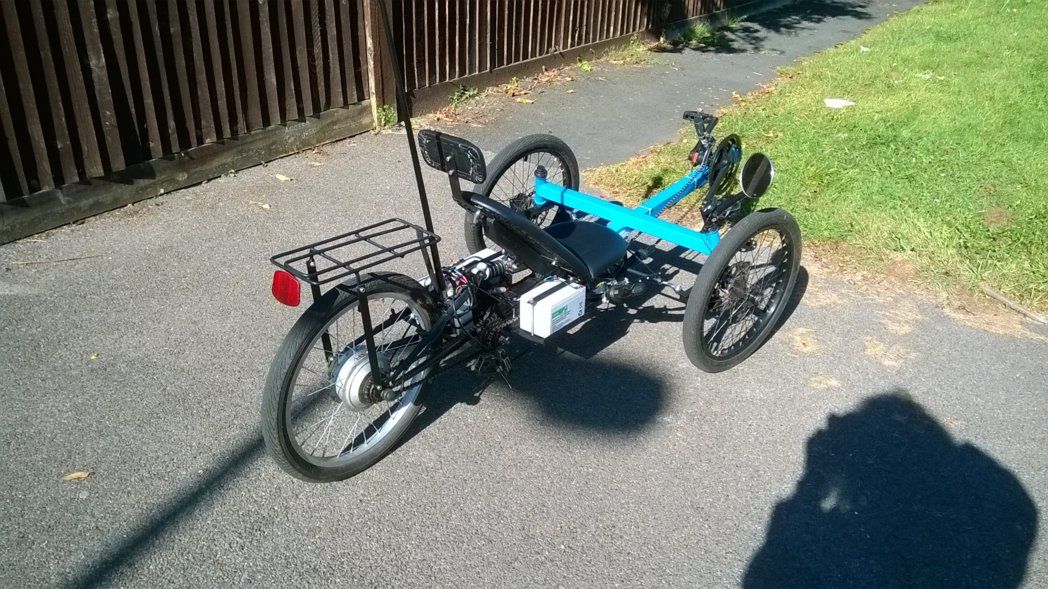 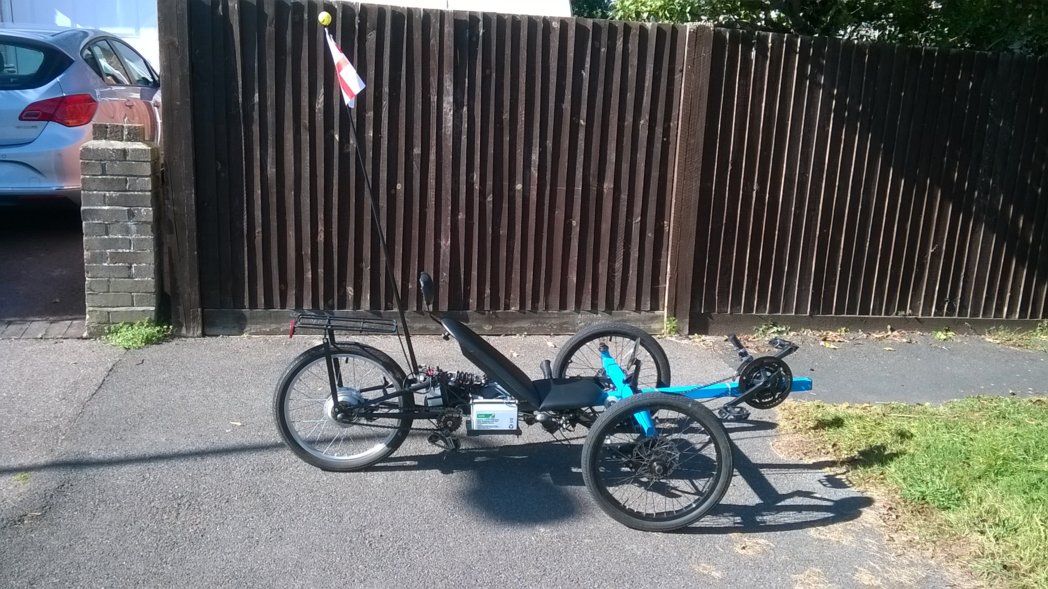 Good looking trikes. Sounds like you need some sort of triple deck parking system in the garage...... I've lost count of the number of builds you've posted over on Atomic Zombie.
OP

fixedfixer said:
Good looking trikes. Sounds like you need some sort of triple deck parking system in the garage...... I've lost count of the number of builds you've posted over on Atomic Zombie.
Click to expand...

Next project is the multi story trike park ,

re projects so have I ?

I have just started the design work on the double trike parking rack , essentially it needs to be
1 movable , - on casters ,
2 smaller than the overall length of the trike - but easy to remove -fit trikes about 2" wider than the trike .
3 top deck - would be nice to be able to be lowered to allow easy fitment of the top trike ( 75lb electric trikes ) (*)
4 able to be lockable both in the garage and have the ability to lock the trikes to the rack
5 built from steel tubing and painted with hammerite smooth for a durable finish against rust and moisture .

(*) I am thinking of using tail gate struts to counter balace the top deck .

We went out on the trikes last weekend and since I have ordered the bits to upgrade the Blue Stealth trike
this includes the rear wheel , an upgrade to a q100 and 7 speed freewheel making both trikes virtually similar in specifications and I will replace the SLA batteries with either the spare Lithium bottle battery or a lifepo4 37v 10 ah battery
At the same time it will need an upgrade to the rear brake to disc. This time I will fit a 140mm disc rotor as it will still be efficient enough to lock up under heavy braking and be easier to fit the e-hub as I had problems and needed to do wicked things with a disc cutter to thin the rear chain stay to allow a 160mm disc to be used .