I’ve been a Fratello owner for a few years now, I own other bikes, but my little orange Fratello has gradually become almost the only bike I ride. It suits me perfectly, does almost everything I need and to my eyes is a very pretty little bike. I know I’m not alone and I’m calling to other Fratello owners to try and compile a sort of register of the evolution of the bike. If money was no object, I would happily seek out every iteration of the frameset so that I could appreciate the changes and evolution of the bike, but that’s sort of the antithesis of the point of the machine, and actually, money is kind of an obstacle to that. So if you’re interested and reading this, if you own a Fratello or have access to one, please consider contributing to the thread with the details of your own machine. I’m assuming that the geometry hasn’t changed much if at all over the years, but if you know otherwise, pipe up. I’m interested in changes in tubeset, tube shape, weight, etc etc.
So I will start: Mine is (I guess) a 2012 model from the frame number – 12/125xxx it bears a sticker at the base of the seat tube which reads SAT 14.5 18MCOV6 micro alloy which presumably is a tube set drawn specifically for Dedacciai. Being 2012, it is of course a rim brake version, and has the pioggia carbon fork, which accommodates up to 28mm tyres with mudguards, but needs long drop brakes. The fork actually has a carbon steerer tube, but that’s bonded to alloy at the top of the fork. It’s not a particularly heavy fork, nor is it super light, but it is quite comfortable, and stiff enough.
The top and downtubes are almost triangularised (I’m sure they’d be described as ovalised, but they are more triangular than oval). The seat tube does not appear to be shaped at the ends, I see no obvious hexagonalisation, as described for current versions, but it could be that I just can’t see it because I don’t know what I’m looking at.
The rear triangle is characterised by the curve of the seatstays which I think is particularly elegant, and does lend a large degree of comfort. Despite having room for big (28mm) tyres and a mudguard, the rear brakes doesn’t actually need to be long drop. Standard drop brakes will work perfectly well here, but who wants a mix and match brake set? Cast dropouts aren’t particularly elegant or pretty but serve their purpose, and are robust. When I rebuilt the bike last year I weighed frame and forks (incl bottom bracket) at 2.3kg give or take.
Despite reports of fragile paint, mine seems pretty robust. It’s the classic orange colour and touch up paint bought from Condor in RAL 2004 (fratello orange) is an all but perfect match, as I have had a few spills requiring some remedial paintwork (some of it very agricultural looking).
I’ve tinkered with various parts over the past few years and settled on what seems to be my perfect setup for now, and fully dressed in summer outfit (carbon clinchers and no guards) she weighs in at 9.1kg, and she carries a little extra weight in the winter from the alloy rims and mudguards.
What have I missed?
If you have a fratello from another year, or a different iteration, please do contribute any relevant details of the frame here and post pics too. Will add some details in due course, but for now, here she is in summer boots and in winter boots. 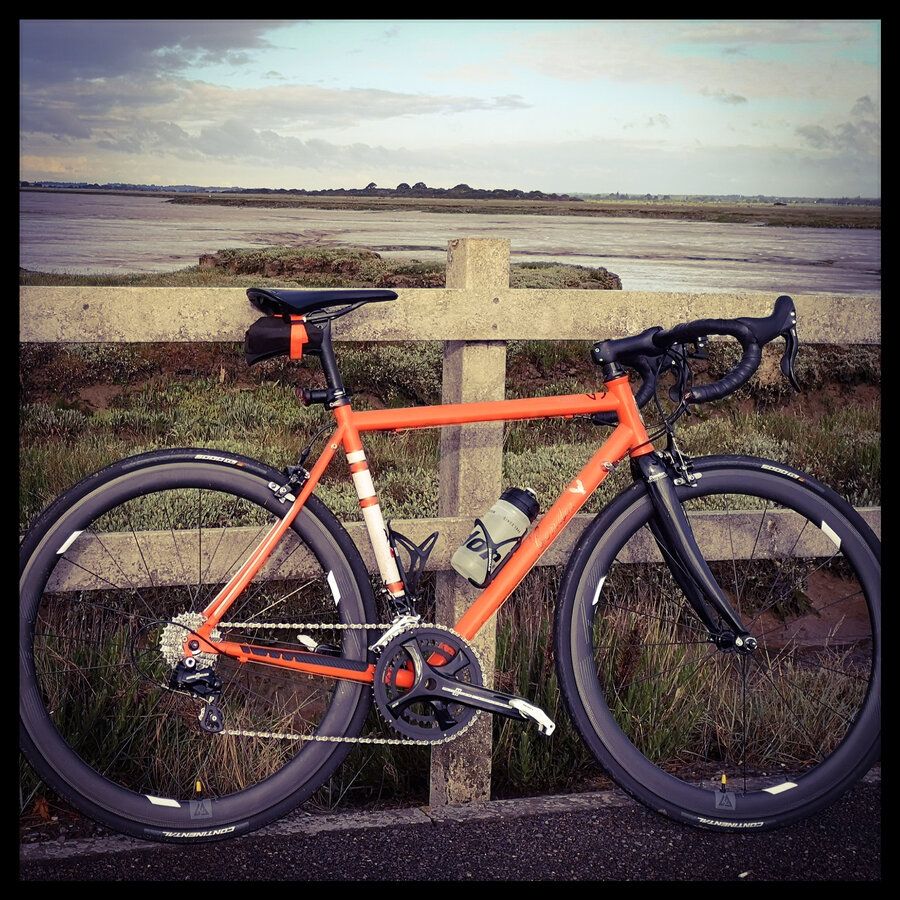 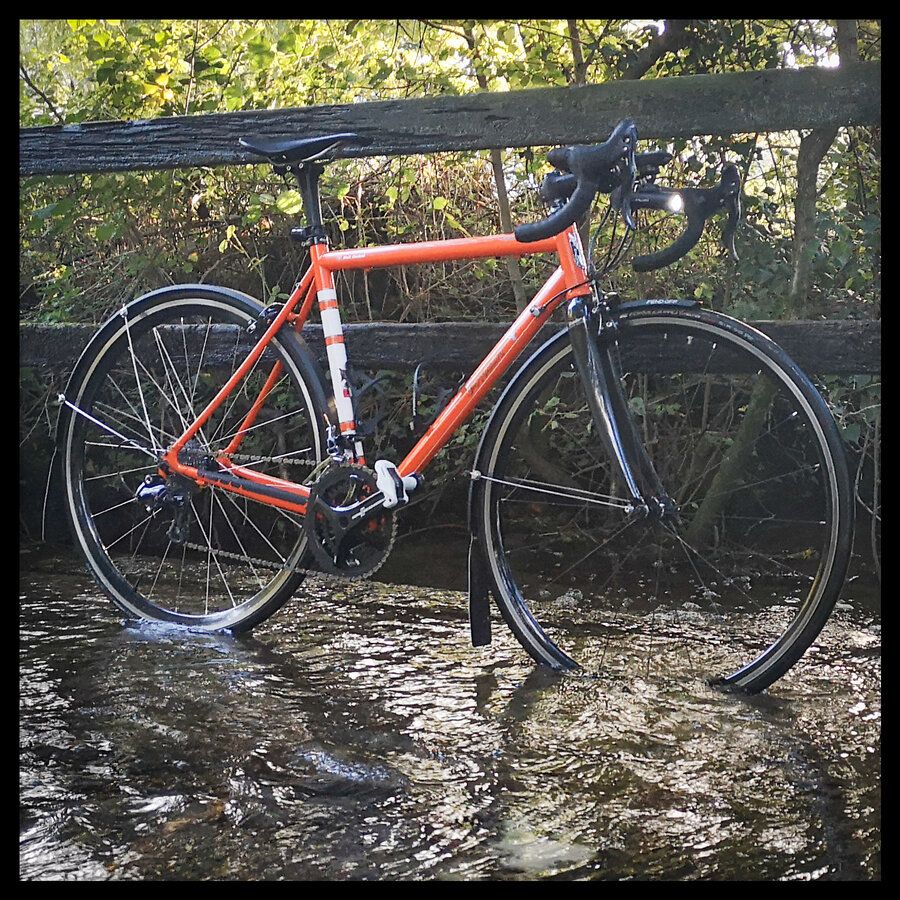 That's a nice bike. As it happens, I was idly browsing Condor's site just yesterday evening.

What are the qualities of it that you like most?

From reading up on it, it looks a bit of a Jack-of-all-trades which to me makes it sound (potentially) a bit dull to ride, but (at least aesthetically) I do find it's honest simplicity appealing.

I owned a 2017 Fratello Disc. Not dull in the slightest. A cracking bike. Unfortunately circumstances meant I had to sell as needed the funds elsewhere but as it happens I have a thread going at moment on a new Condor. Bivio and Fratello are two choices so be interested to see replies to this thread. I am thinking a fratello Thru axle with Campag Potenza and Mavic all roads
OP

What are the qualities of it that you like most?

From reading up on it, it looks a bit of a Jack-of-all-trades which to me makes it sound (potentially) a bit dull to ride, but (at least aesthetically) I do find it's honest simplicity appealing.
Click to expand...

It's extremely comfortable and also very quick. My 'best bike' is a look 785rs and although the handling of the look is sharper, the condor is easily as quick, but has the clear edge in comfort. I realise that the following marks me out as what I am - a dull mamil - but the fact that it takes big tyres and full length mudguards without issue or fuss makes it very practical and if I should ever need to use a rack (god forbid) that's catered for too. I think jack of all trades is not the fairest description. I wouldn't take it on anything rougher than a farm track or a towpath, but it's an accomplished audax machine, a capable fast trainer and a passable light tourer. I'd probably even race it... If I ever raced.

Thanks, that is very interesting. Surprised you say it is as quick as your 785RS (another very nice bike BTW). Surely the Condor falls behind on hills with it's weight penalty? I guess this is very rider dependant stuff though.

How do you find the sizing? Looking at the geo, it has a very tall front end for my typical medium. Stack is almost 590 for my usual size, so I might have to size down and have a slightly longer stem.
OP

OK I should qualify that 'quicker' statement. I am not a cyclist who is going to get full benefit from a bike like the Look. It's more bike than I need or frankly deserve. Mid life crisis purchase. It's lovely, but overspecced for a someone with my power to weight ratio and riding habits / preferences. So over the course of a typical ride for me, which could be anything between 1 hour and 8 hours, the Fratello is easily as quick as the Look. However on the (very) rare occasion that I put in a bit of effort to generate some watts, I will concede that the Look has the advantage in speed.... but.... I struggle to maintain high watts for more than a couple of minutes, and so on any climb (and I live in Essex, so that's a pretty liberal use of the word climb) that lasts more than 3 minutes, the Condor has all the stiffness and power transfer I can use. I wouldn't profess to offer accurate size guidance, but I'm 175 tall, with long legs / short torso, and I ride a size 52 Fratello. I think sizing is pretty standard. I guess it all depends how you like to be positioned on the bike. my saddle to bar drop is about 85mm if that is any help at all (to give you an idea of how racy or otherwise my position on the bike is)?
B

Mine is from 2004/5 I think (receipt is in the shed). Sadly, not one of the better colour schemes - yellow and silver. Initially used as a commuter, so has a few scrapes in the paintwork from d-locking, but subsequently used for audax and a bit of off-roading. It came with campag veloce, but I swapped that out for sram 1x and it now has Nitto seat post, stem and bars. It's a great bike. I don't ride it much these days, but don't think I could get rid of it!
You must log in or register to reply here.
Similar threads