One of the saddlebags I use is a Carradice Barley. Rather than having it flap about I think I need a support of sorts.

Available, are the Bagman Sport supports. (Small ‘L’ shaped rack that fits to the saddle rails)

I don't have any saddle loops on my bike so I use a QR. It works well, and it is quicker to remove the bag than removing individual straps.

The downsides are that you have to fit the QR adapter on the bag with cable ties, so you can't choose to switch bikes to one without a QR. Also the clip mechanism can be a bit fiddly to get engaged. Once you've sorted it the bag is very secure, but lining up the QR and the two pins can be a little awkward.

I have the standard and its perfect. Saw no need for the QR which is ugly imo

I recommend getting the QR version.
Without the QR, it takes a significant amount of time to attach or detach the saddlebag from the bag loops, especially if the bag is fully packed. When I've been touring with people who attach using the saddle loops, they generally leave the saddlebag on the bike and walk away with the contents in a handful of tatty carrier bags.


mcshroom said:
The downsides are that you have to fit the QR adapter on the bag with cable ties, so you can't choose to switch bikes to one without a QR.
Click to expand...

The Bagman QR was available for several years before the plastic QR adapter and cable tie arrangement became available.

You just set the leather straps so there's about a 1 cm loop outside the saddlebag. It adds maybe 5 seconds to the time taken to fit the saddlebag on to the QR, and the bag would swing a bit more if you use the QR without the support loop or a rack, but that's about all.

I've got the QR adapter (somewhere), but I don't use it as I prefer to use the leather loops for an off-the-bike carrying handle (the mini-carabiners subsequently exchanged for 3 mm delta maillon rapides) 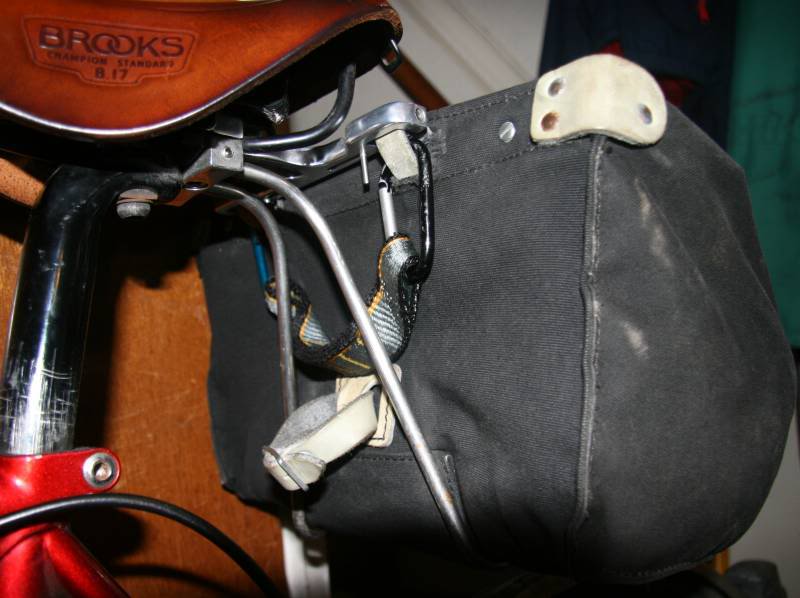 I use the Carradice Classic Saddlebag Rack

It gives a carrying handle.

I had a QR before that; however it was ugly and fiddly to attach the bag.

Correction - it was an SQR that I used with a seatpost bag that they don't seem to make any more. Still ugly and fiddly though.

alicat said:
I use the Carradice Classic Saddlebag Rack

It gives a carrying handle.

I had a QR before that; however it was ugly and fiddly to attach the bag.
Click to expand...

I use the same thing. Brilliant IMO.

I also have a Bagman Sport or Expedition (can't remember which it is) and whilst both are rated to carry 4kg more than the Classic, they have much less flexibility and if you have a low saddle like muggins here, they can still hit the mudguards/tyres. The Classic has the bag quite high.
OP

Thanks very much for the effort. I think I’ll go with the K.I.S.S. principle and go with a standard.