Hi people,
I live in Leicester which according to LCC I live in a "cycle friendly city"........ But in actual reality "it's not". (cycle lanes designed by morons etc)

So just wondering what everyone else thinks from experience of their "cycle friendly cities"?

I would like to comment but I would get depressed on your behalf as I live in Denmark which is most certainly a cycle friendly country.

I think from comments made on here from other locations that a cycle city may be more friendly than other places but that they have a long way to go too.

As for the designs they come up with it's a weird combination of box ticking, individuals who want to help but don't necessarily help, cyclists wanting different things, money and government policy.

No idea if Croydon is classed as cycle friendly...not a city though...seems fairly friendly though, in spite of reputation and I've only had crap from the odd teenager here or there, which is kind of what they're there for. Plenty of cycle lanes too. I just go where I want to though really and I'm not exactly the most social of people, so the less friendly the better...so long as it's not hostile...because then I have to man up and that always makes me want to cry or fight...ho hum.

And even if they do have cycle lanes: 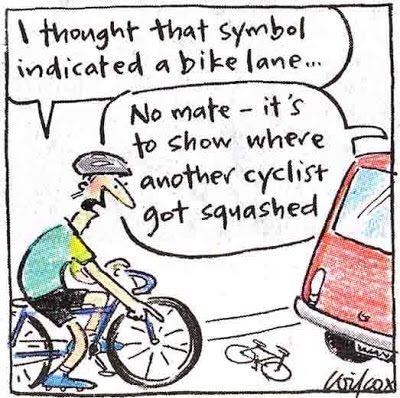 summerdays said:
I think from comments made on here from other locations that a cycle city may be more friendly than other places but that they have a long way to go too.
.
Click to expand...

I would agree with that but at least some have a starting point.

But there are many cyclists on forums such as this who think it can never happen and dont see the point in trying. There are some cyclists who think it is an affront to their civil rights to even suggest removing them from the other road traffic.

I have ridden for years in the UK and Denmark and the system here is great. I like being away from the traffic.

Manchester is very hit and miss, with a lot more miss. People spending the money in very specific areas and on destination hub buildings rather than safe and comfortable means of getting about the conurbation & to these grand schemes.

Increasing removal of heavy rail infrastructure that allowed bikes in favour of the LRT Metrolink which has a blanket ban on any bike not folded and covered; Tho to be fair I've had the Brompton uncovered on it; and a seemingly immovable resolution from TfGM that bikes are verboten. Even when they've sourced new rolling stock they've made no concession to bike friendly rolling stock & the station facilities are a joke, lockable bike boxes on some platforms allocated to & locked up by individuals & I've yet to see one with a bike in it at any time of the day.

My local council has recently made a bad road for cycling unusable in practice with bizarre carriageway wide and dozens of metres long & foot+ tall concrete pill boxes funnelling all vehicles into less space for no sensibly given reason. allied to narrowing the existing inadequate painted cycle lane and meaning that there is not room for a bus or truck to pass a cyclist with the HC recommended width. Even TfGM staffers who know the area say its awful, it has also had the knock on effect of making the previously quiet residential side streets into busier rat runs. There are similar complaints and restriction on safety from pals who live in oother areas too.
Last edited: 20 Dec 2014

Don't think I've ridden in one in the UK, York is pretty cycle friendly though.

Maybe Leeds and Bradford will change when the current Leeds-Liverpool upgrade (Shipley - Leeds) is finished and provides a mud-free 10mile+ "transport corridor" between the 2 cities. Bradford has quite a lot of cycle lanes, nobody much uses them, periodically (inc this week) the local press makes an issue of low cycle use, they never grasp that people in Bradford are reluctant to commute on a bicycle for the same, and blindingly obvious reason, that people in Lisbon are reluctant too.
Last edited: 19 Dec 2014

Location
in macc, on the mac, bike, or sofa

Stockport to manchester is bus lanes all the way till levenshulme...

I briefly lived in Milton Keynes. It takes a lot of stick torn the poor quality of its cycle network, but the bottom line is I found it pretty reasonable. Several main arteries give rise to a huge network of more local routes, which do tend to meander a bit but aren't all that bad. Some of them are very picturesque. My biggest beef was poor maintenance, cleaning trees overgrowing lamp posts etc.

My town, blackpool was a 'cycling town'. Loads of stupid cycle lanes that are more dangerous than the roads. Believe the funding was stopped though. I use the promenade cycle route although it's full of idiot dog walkers letting them run riot. We also had tonnes of stupid yellow hire bikes , that have now been scrapped.
D

Manchester is a city which could do so much better. Poor infrastructure, poor vision by TfGM, poor enforcement by GMP. Given the wide main roads leading to the city centre (A665, A56, A62 to name a couple) there is so much space to add good quality infrastructure if only the council and transport authority had the guts to prioritise people over cars. Unfortunately, nobody in the position to make such a change has the spine they were born with, so rather than the revolution we need, we get useless tinkering around the edges.

Don't get me wrong, there are some nice cycle routes. You could certainly do worse than using the Fallowfield Loop to get from Droylsden to Chorlton, even if it is a bit of a barrier-fest. It's just unfortunate that we're then given things like door-zone cycle lanes next to tram lines on Ashton New Road, or have a key cross-city cycle route removed as part of the work done at St Peters Square. They also don't seem to understand you won't get more people cycling by having fancy places to park their bike if they don't feel safe on the roads. That or they just want cyclists off the roads, hence the abundance of tow-path routes in the Velocity 2025 plans.

London is pretty good, but that's much more down to sheer weight of numbers than to the facilities.
You must log in or register to reply here.
Similar threads