Delta trike rebuild - starting with half a Kettwiesel

Nigelnightmare said:
If you used an Idler it would have to be floating or you'll end up with a compromised chainline as you run through the gears, as the chain run is rather short from the seat mount to the cassette.
Click to expand...

Yes, I'd thought about a floating idler too. Good. A bit concerned that if I did use one, I'd want a minimum of 11/12T, so it'd have a diameter (plus required clearances) that would put the seat base way above its current height. So I'm keeping that option as a last resort, even though it'd be rewarding to have it working properly.

Looking forward to see how you resolve this.
The alloy the seat frame is made of doesn't weld easily as it's tempered. Ask ICE.
Click to expand...

So I'll cross out getting the base of the seat frame modified.

In reality, I had not thought that an option - the ICE seat frames are incredibly light, and I don't recall ever seeing a post / report of the seat frame causing problems. So best leave as is (especially if a welder tells you they're not easy to weld.....

), and modify the supports around it.

The lower chainline may not be so difficult a problem to solve - currently the steerer arm is straight, and very close to the pivot point; but a longer steerer neck, or a handlebar with a 30, 50 or 60mm rise, or an amount of rotation could all mean the return chain line clears the bar.

Frustratingly, I'll not be able to try out any ideas until the weekend. 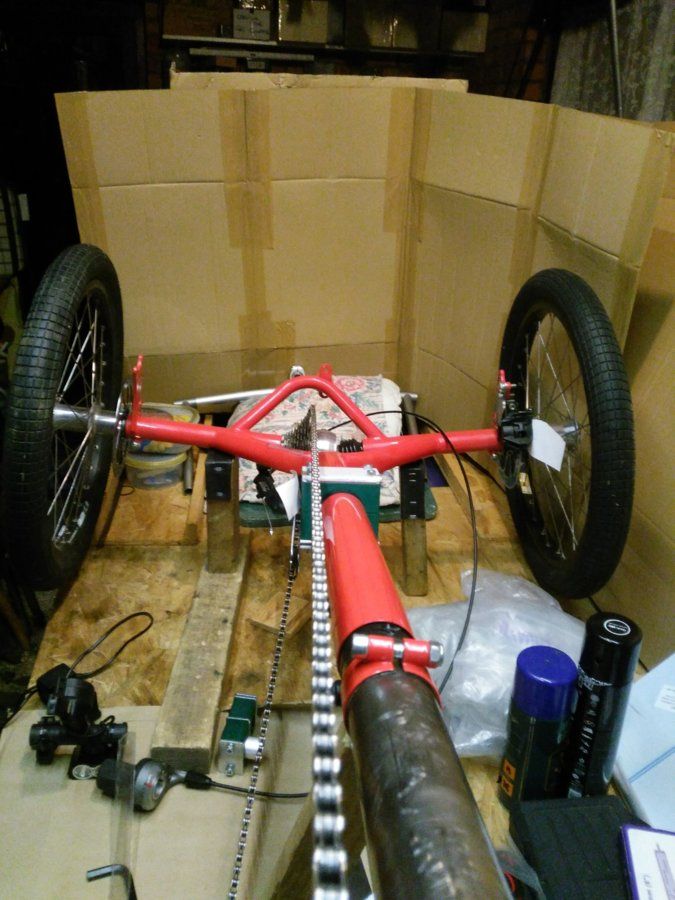 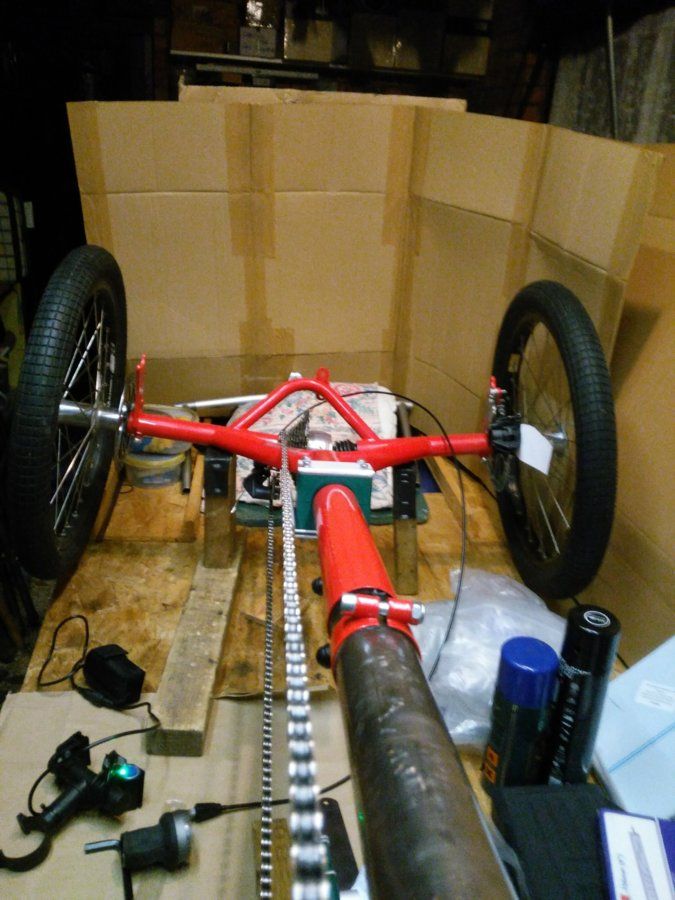 On 11T - clears the side of the frame clamp.

The problem is that changing through the gears fouls the top drive-side corner of the clamp.

I can't see a simpler way round this than a floating idler, combined with widening and increasing the height of the seat support a little. 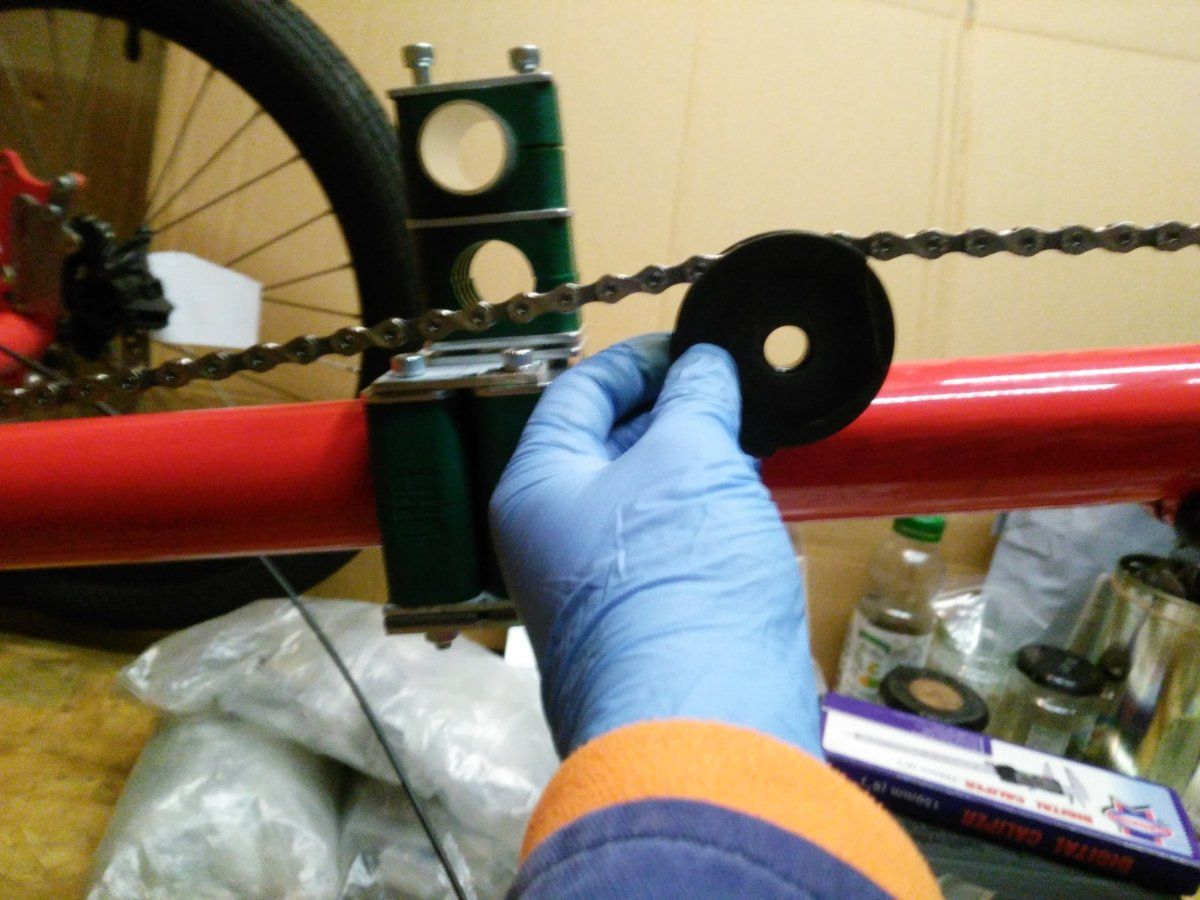 I've got a spare toothed idler left over from when I had a Performer JC-70 tadpole. I knew there was a reason for keeping it.

Would a wider BB cure it. Instead of the idler.
Andrew
OP

Hmm, I think on the current set-up that could give extra clearance for the gears at the 11T end of the cassette, but looking at the 34T side, I'd need quite some extra width on the BB to ensure it runs clear - here's a photo (top is BB end of frame) of the chainline 52T front 34T rear, but viewed directly overhead. You can see it's well over the clamp edge. 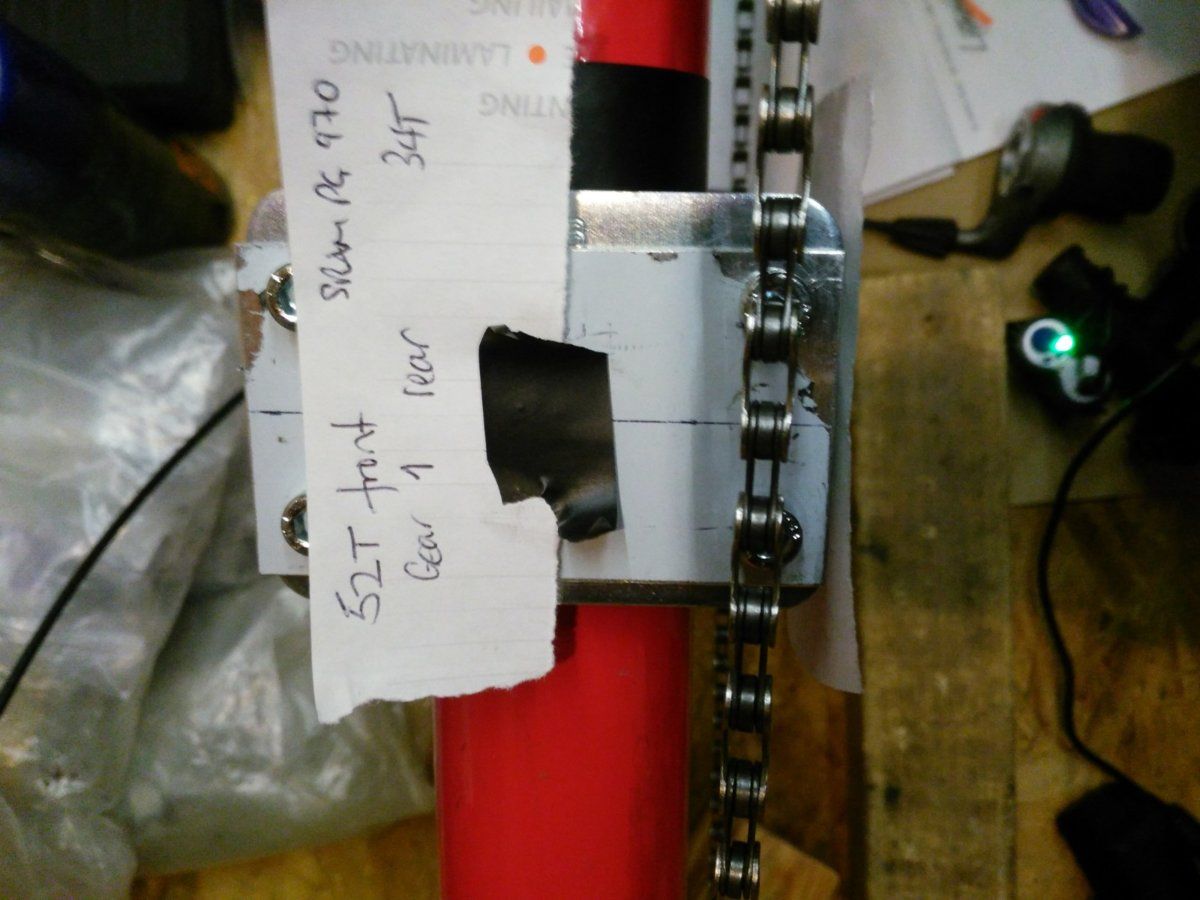 Forgot to mention that I'm still relying on the frame clamp as a base for the seat clamp; whilst I can get lateral stability for the seat from two supports attaching to the rear of the seat frame, this lower support for the seat base needs to bear down centrally on the main frame.

(Somewhere deep in the back of my mind is Pythagorean theorem, ready and waiting to help me calculate how much wider the BB would need to be, for a given chain length (hypotenuse) , needing to move x cms from the vertical, at y cms from the base. Sorry, I'll have to stop there, I've now got a nose bleed.

I'm away with work until the end of the week, but I can still think about fixing the problem. Here's what I'll try next. Not sure how best to support the idler axle, and how high it'll need to be to clear the boom when chain's running to the 34T cog ?

You can get away without an idler if you made your 52mm bracket top rounded so it looked like an arched window, or

, or a section through a bowler hat.
Thus lowering the clamp bolts and gaining chain clearance through the gear range.
Then the seat mount goes in the center of the arch (center riser in the diagram above).
You wouldn't need the outer risers and the plate under the seat mounts could be shorter (saving weight).
Also without an idler the chain line will be better, quieter & more efficient.

HTH
Sorry I can't put diagrams or drawings on here. I've been told how but can't get it to work.

Yes, that could work. Did you mean something like this ?

Does anyone know the height above ground for the older steel-framed Hase Kett seat base (not the clamp underneath, but the mesh supporting your backside) when seated ?
N

I know it's now June, but I've made some progress, at last. 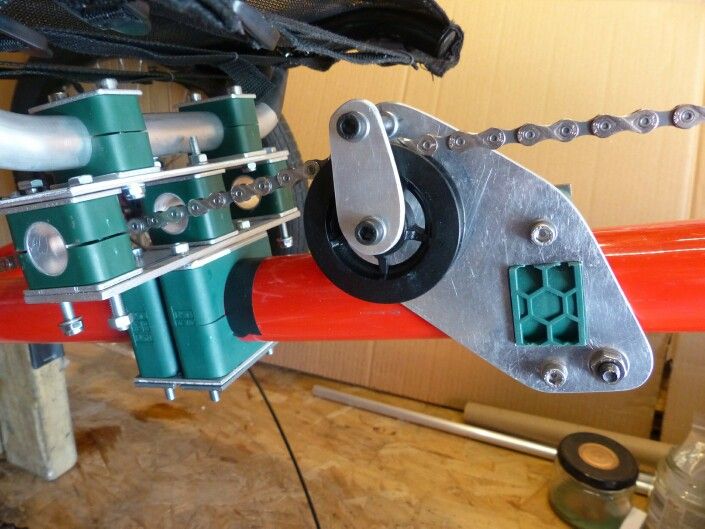 Well, the seat support has been modified by adding risers. The picture above shows current "work in progress", so some tidying up of bolt lengths is still to be done. The increase in height now has the seat base at 19" from the ground (standard Kettwiesels reportedly at around 18-20"). Considering my Hase Lepus has a seat height at 22", similar track width, but has wheels that are much less canted-in, I don't think it'll make much difference to me (but maybe it would to a regular Kett rider) ? 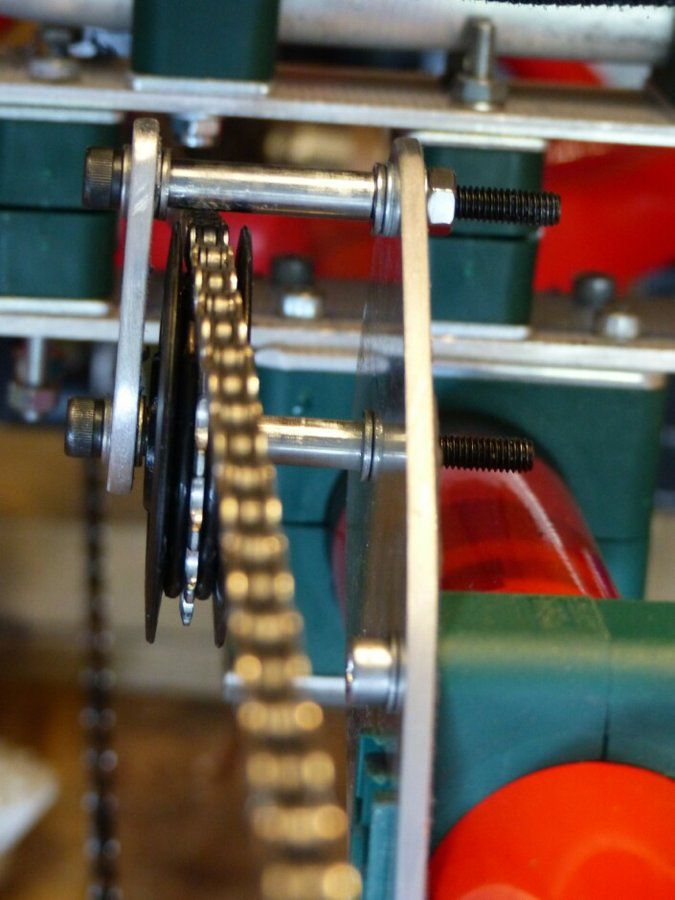 Secondly, the floating idler - now completed. An 11 tooth Allight-brand toothed power idler is free to move left or right along the width of a highly polished and greased 8mm s/s "sleeve". As the chainline moves, the idler follows. A chain keeper sits above the idler wheel on the support bracket, which itself is clamped to the frame with a modified Stauff-type clamp. 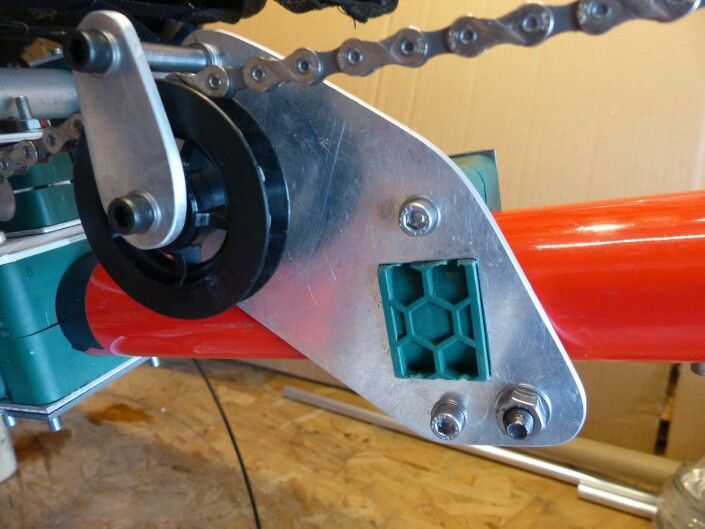 Above is where idler ends up when changing to a higher gear.

Below is where idler ends up when changing to a lower gear. 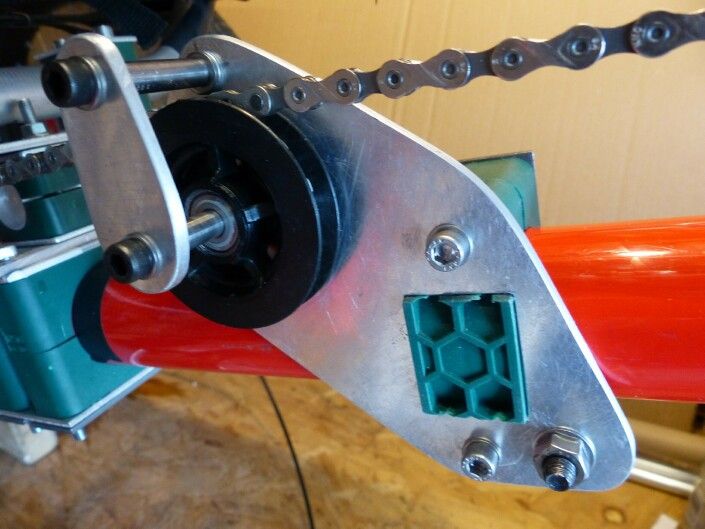 The position just ahead of the seat was the best compromise, having previously tried to get it to work a) between the rear cassette and the seat mount, b) under the seat, c) at the point where the boom inserts into the frame. On the bench in testing, every change in gear has the idler move to a new position, ensuring the chain moves through the seat support without touching any of the surrounding structures, and the chain line is straight between rear cassette and front ring. Time will tell whether this is reliable. 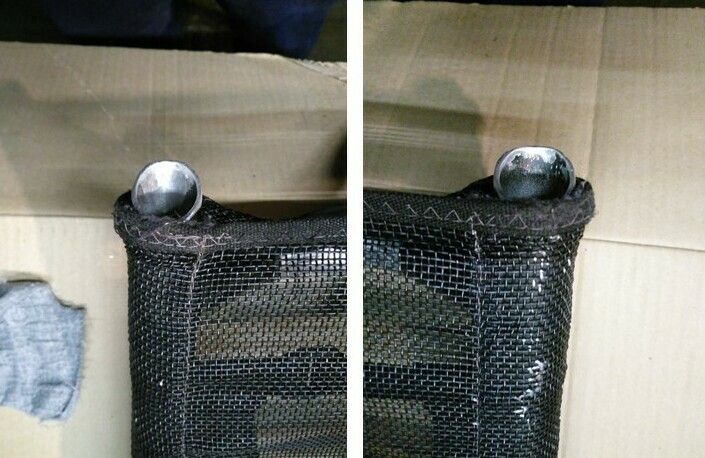 Thirdly, the seat repairs are finished. A hole in frame cross-tube repaired, and missing top sections of seat tubing (above) replaced. Seat mesh machine washed first, then mesh repairs using SeamGrip - hopefully that will put an end to frayed fibres and loose threads. 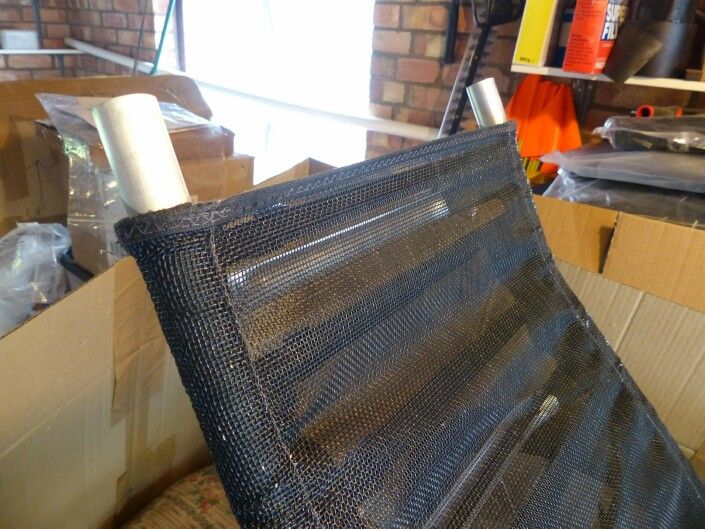 Now the mesh stretches evenly across the whole seat. I decided to add an extra inch to the uprights' length when repairing - enough space for a rear light mount.

Lastly, I've re-purposed the aluminium tubes from a walking frame. 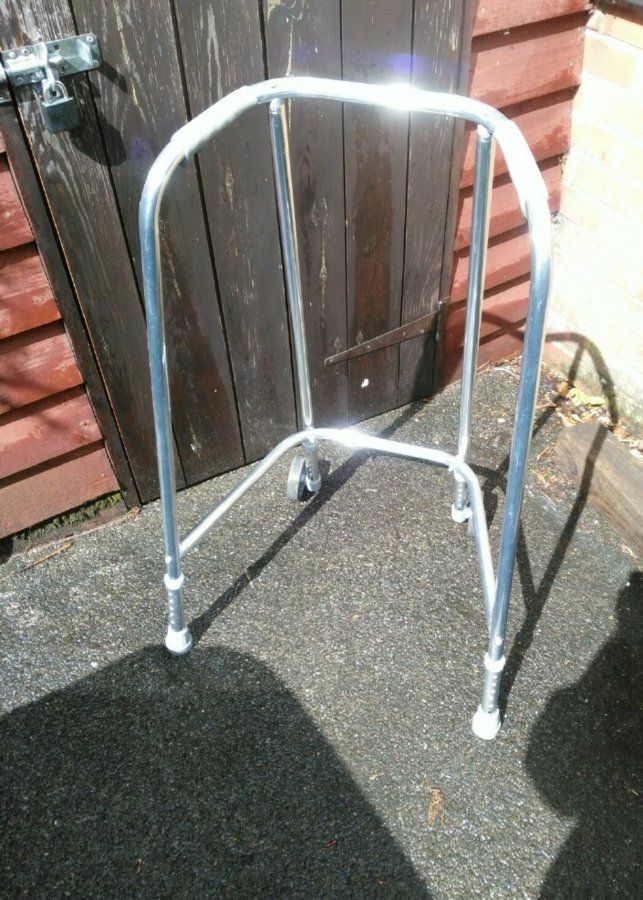 Then the idea for this came. Rather than leave my elderly mother without the walking frame I got the idea from, I paid £2 for an identical second-hand one this morning. 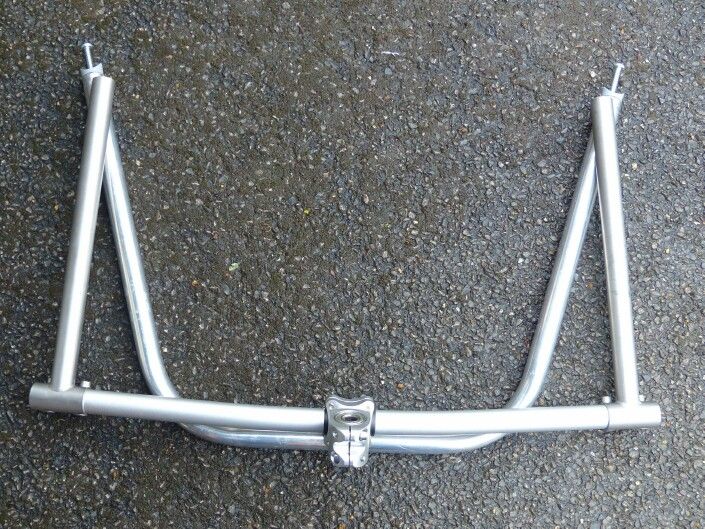 The end result, at maybe a third of the weight: 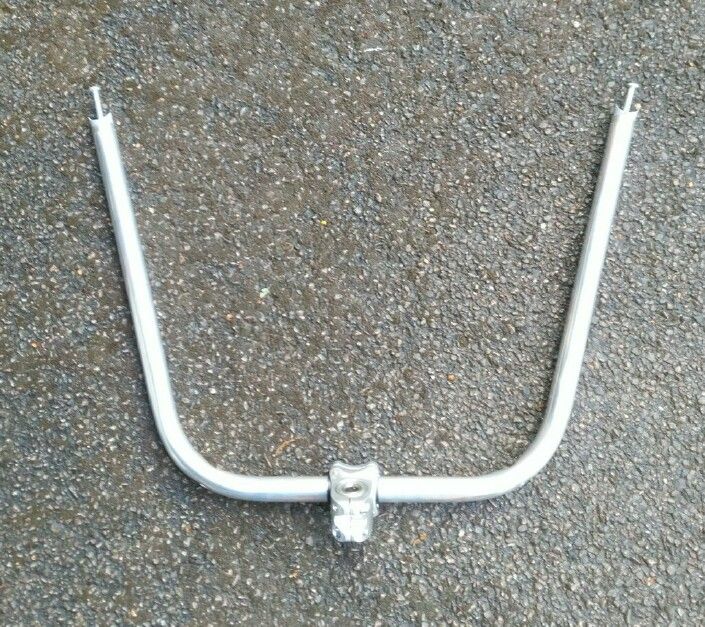 I spent some time today measuring and adjusting wheelbase, x-seam and seat angles on the rebuild, compared to the Lepus.

The new TSDZ2 crank drive is almost completely hidden behind the 52T chain ring, and because the handlebar to front fork steering pole will run above the bottom bracket, the motor hangs in a more normal position underneath the boom. 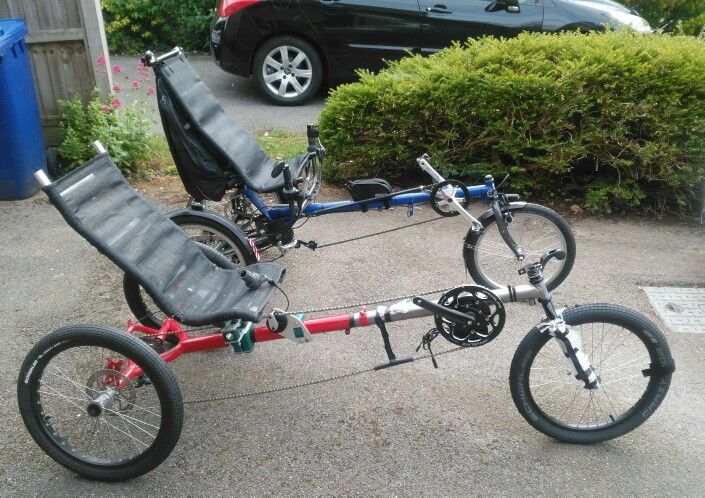 If the 52T front gearing does prove too high, the floating idler's position won't need to be adjusted if I reduce to a 46 or 42 tooth ring.
OP

I had two attempts at making seat supports today, one bad, one good. The fine weather meant I could leave the trike outside on the ground, leaving the workbench in the garage clear. Here's the idea: a 2-part stay for each side of the seat, where the lower fitment bolts to the frame, and receives the (longer) upper that has been clamped to the seat. All parts are now ready to be fitted, so tomorrow I should be able to sit on it for the first time. 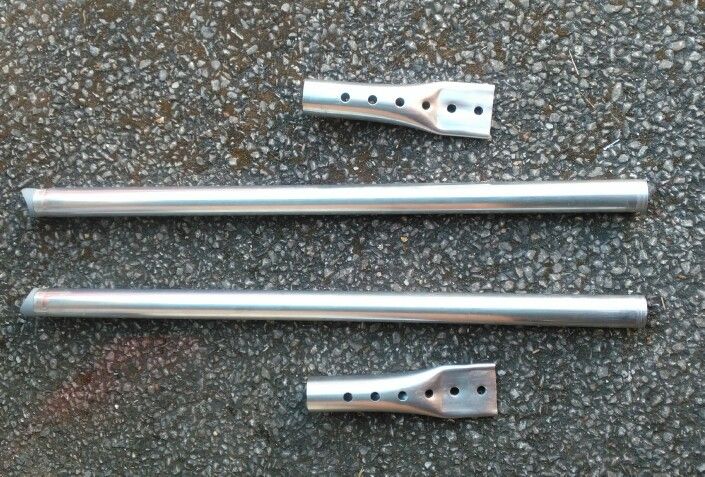 Now that the seat supports are in place, I can test out the sitting position for real.
Maybe a tad too upright, but reclining the seat will be possible by reducing the length of the two aluminium seat stays and loosening the underseat clamps and then re-tightening. 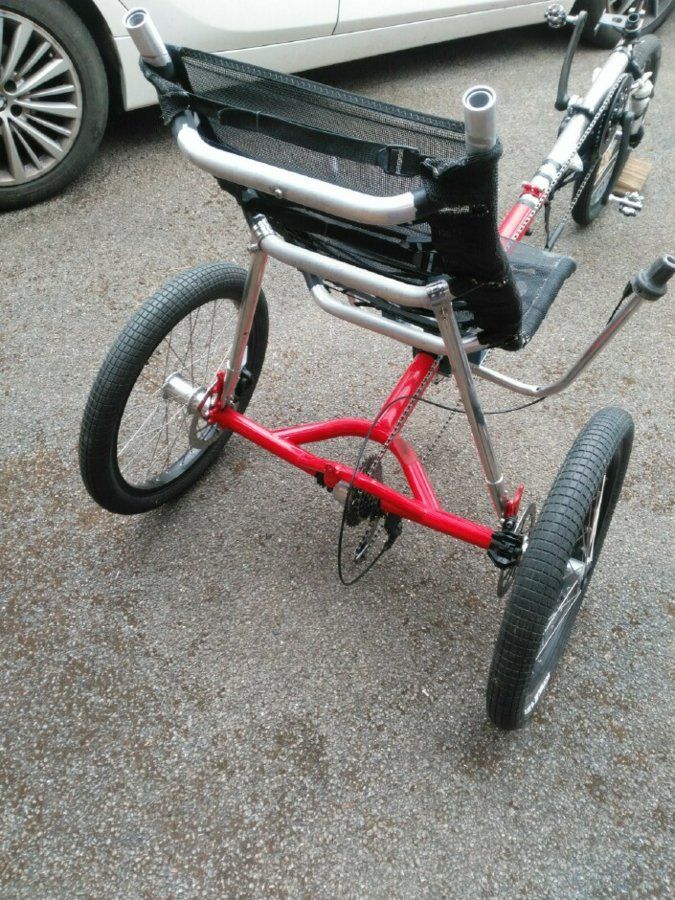 The seat riser arrangement has been revamped with 38mm stauff clamps, and 38mm OD aluminium tubing inserts - the first version that worked properly used 25mm clamps, but there was still a risk the chain would rub in 1st gear. Of course, it was easier to make the horizontal plates second time around, I knew what to do. 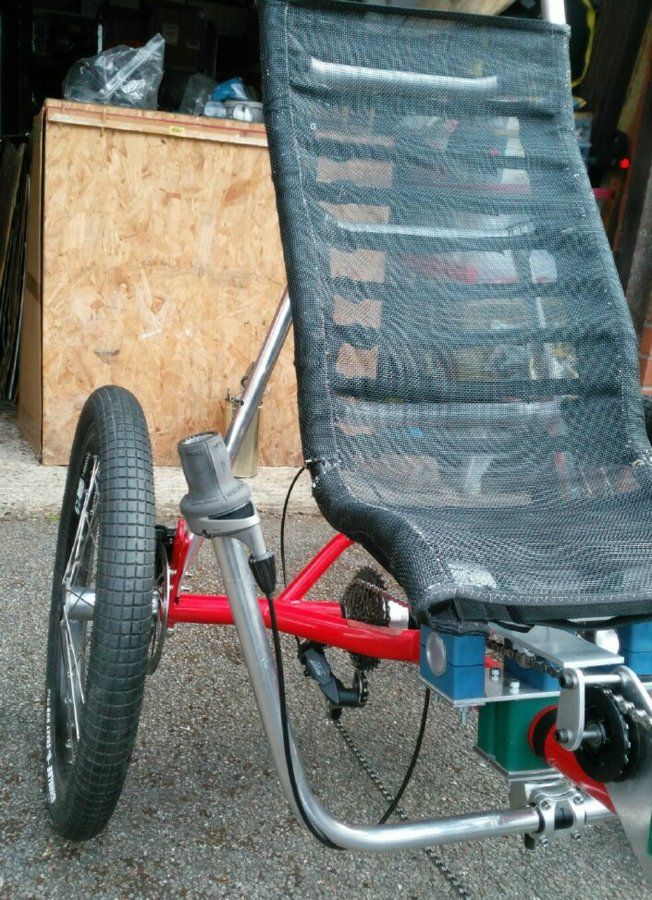 As the seat support needed to be rebuilt, the underside of the seat has been afforded some protection from the chainline by running the upper 4mm al plate forward right up to the floating idler - the plan is to have chain tubes running from there to the chainring, and then another chaintube to take the return.

With the seat in roughly the right position, I could check the "zimmer" steerer idea was going to work. Clamped in place, it became clear there wasn't enough clearance between the edge of the seat, and the upright of the steerer. The ICE seat has a width of 39cms, and my Hase Lepus seat has 43cms, and I find a 10cm gap between edge of seat and the centre of the grip shifters is comfortable.

So the steerer needed to be wider. The solution has been to splice a new length of 22.3mm zimmer tubing into the middle of the steerer, using an a very tight-fit internal support tube and M5 bolts to secure against rotation.


Fitting pedals was a good next move - I could sit, test hand height & position, and check the boom is at the right length (no it is not....). 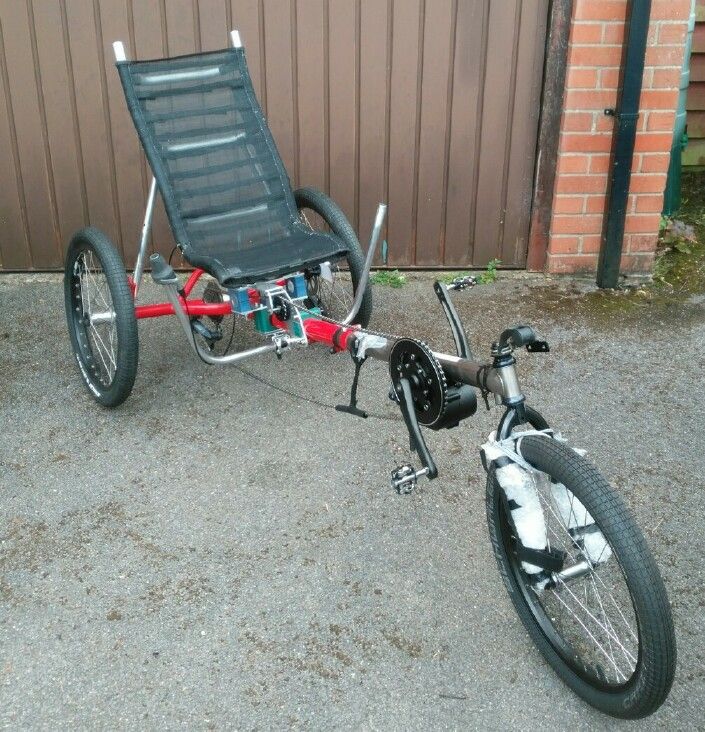