Downloads: Whalley To The Trough Of Bowland

"The Most Annoying Man In The World."

The route starts and finishes at Spring Wood Car Park just off the A671 (SD 741 360) so you can award yourself an ice cream at the end at Harmsworth's Ice Cream Van which is there almost twelve months a year, I swear...

More or less half way around the route you can stop off at the cafe in Dunsop Bridge for a brew and a slab of cake if the need is there, after your brew you then head into the beautiful Trough Of Bowland:- 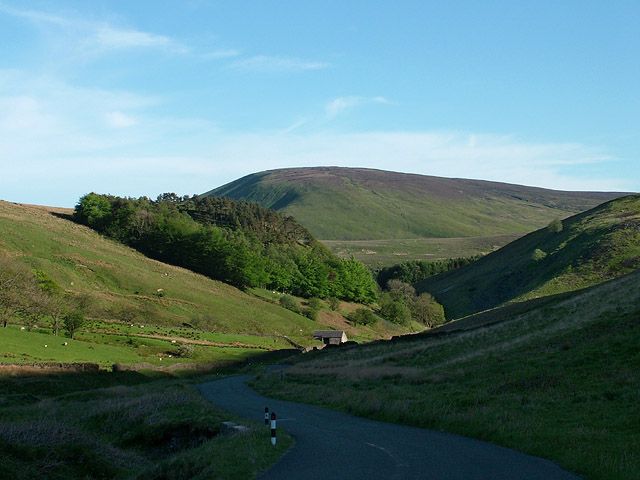 After circumventing the undulating topography you will pass by the village of Chipping which also has a handy cafe where you can stop off and get refreshments, it also has a public toilets as well just behind the cafe which could be needed by now.

After Chipping you skirt under Longridge Fell and then head back on the road that you started the journey on, passing through Whalley and then up the last climb of the day to the car park.

Hope you enjoy the ride as much as I do, this really is a classic route and one that can be repeated many times without ever getting bored of< i have attached a GPX file contained in the zip and a screenshot of the overall route

There's a 7 foot difference in the ascent and descent figures - did you end up on top of the ice cream van?

There's a drinking water tap in the Gents at the side of the car park (it's above the wash basin and has  a 'D' marked on it - I had to point that out to someone who didn't spot it right in front of him!)

That's one of my favourite loops and one that I access by another loop from Hebden Bridge. I'll take your example and plot that for the CycleChat membership.

Nice route Russell, not sure what "circumventing the undulating topography" means but I'm sure it's right !

Colin, some routes have more uphill than downhill even if they are circular. It's a local phenomenon, the figures merely reflect that. Some of your circular rides seem to have considerably more up than down.

BTW will you be organising another one soon?

Alun said:
Colin, some routes have more uphill than downhill even if they are circular. It's a local phenomenon, the figures merely reflect that. Some of your circular rides seem to have considerably more up than down.

BTW will you be organising another one soon?
Click to expand...

I'm waiting for the summer to come back!

The last couple of rides didn't go well as I seem to have developed a problem with my right leg which shows itself on steep hills after 50 miles or so. I think now the damage is done, it might be worse than that so I need to get out and test the leg to see how I get on. It has been okay on MTB rides (nice low gearing) and a couple of easy road rides. My road bike has been out of action until a couple of days ago, but I now have new wheels so if we get a sunny day, I'll go and do 40 hilly miles or so as a test. If all is well, I'll organise a ride. If the worst comes to the worst, I might have to start walking the steep stuff or fit even lower gears to my Basso.

Very nice area that Russ. I used to love going up to Trough of Bowland when I was younger. I used to live in Snotty Harud

hi sysagent ...is the cafe you refer to called .."the cobbled corner " by any chance ?
R

A favourite route of mine although I tend to do it the other way round for the wonderful long run down to Dunsop Bridge. You pay the price though in the short sharp double chevron climb up before Marshaw. Also worth a detour to Beacon Fell where there is a cafe and wonderful views out over the Lancashire plain

The cafe in Dunsop Bridge is run by Trevor and Louise; Trevor is a baker and makes all the bread and cakes. His scones are sheer heaven and worth a detour to try. My favourite run is out to DB for a coffee and a scone then back by a different route.

Globalti said:
The cafe in Dunsop Bridge is run by Trevor and Louise; Trevor is a baker and makes all the bread and cakes. His scones are sheer heaven and worth a detour to try. My favourite run is out to DB for a coffee and a scone then back by a different route.
Click to expand...

That's one cafe that I haven't taken a forum ride to. We've visted the cafes in Waddington, Chipping and Slaidburn but not the one in Dunsop Bridge. It sounds like a good place to go to.

I've worked out a good route to take us to the cafe from Hebden Bridge, but with the colder conditions and the clocks going back it is a bit late in the year for it so I'll keep it in reserve for Spring 2012. It is 107 km (67 miles) and takes in the Long Causeway, Padiham Heights, the Nick o' Pendle, Waddington Fell and the nasty little climb from Whitewell over to Cow Ark (which has been on my to-do list for ages).

I also have a longer route in mind which is basically Russ's Trough route plus some scenic extra bits to and from Hebden Bridge and that would make a very nice hilly imperial century ride, but we'll leave that until Summer 2012, and hope that we get a nice sunny day for it. The last time I attempted it on a forum ride, we were hit by monsoon-like conditions on the way round to the Trough and decided to cut the ride short!

Dunsop Bridge is also the site of the most central phone box in the UK, which is handy as mobile reception is rather poor.

ColinJ are the forum rides open to everyone? If not how do you apply and find out when they are?

johnpembo73 said:
ColinJ are the forum rides open to everyone? If not how do you apply and find out when they are?

John, the ride threads are to be found in this sub-forum. Forum rides are usually pretty informal affairs - if you spot a proposed ride that you fancy, just post a message in the ride thread saying that you'd like to go along. You'd be made very welcome.

If you want an example, here is one of my favourites. That was a particularly tough one - most forum rides are not as hard as that.

I've met about 80 CycleChat members so far and they have all been great to ride with. Many are fitter than me, but they wait when they have to and never complain about doing so.

I've met Sysagent, Globalti and Alun several times on my rides.
You must log in or register to reply here.
Similar threads