Fantastic mirrors for a road bike.

Without wanting to start (or restart......or re-re-re-re start!) any 'for' or 'against' mirrors debates, today Mr Postman delivered to me a great little product. I've only recently discovered these little gems http://www.sjscycles.co.uk/sprintech-racing-road-mirrors-red-prod35412/

I've always had mirrors on all my bikes, but never found anything that works well on drop bars, without looking c**p, or making the bike too wide. These are small, sturdy, and even come in different colours. Not the biggest view behind, but I've diced with heavy Doncaster traffic today, and they worked really well. Also, as they are no wider than the bike, it's a lot easier to get the bike through the front door! Not the cheapest at just over 20 quid (for a pair) but I'm very impressed. 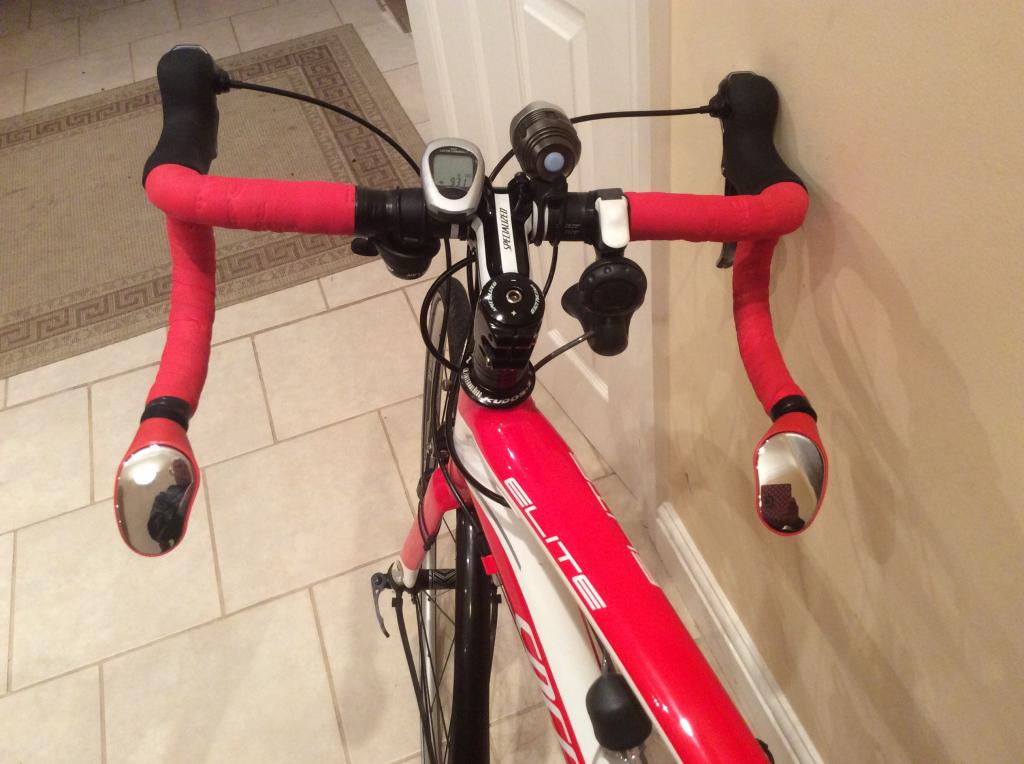 So you are still looking?

gaz said:
So you are still looking?
Click to expand...

someones had too much bitch cake for lunch

Gaz can't have studied the pic properly. Any decent heckler should see past the obvious insult, spot the reflection, and torn into me for using an Ipad with a pink cover!

Seriously though, I think the colour coordinated/aero/flush fit is far better than the usual mirrors?

BTW, look at my avatar.....would I really be bothered if they did look a bit naff?

But do they work when you are on the bike?

Quite agree I have these on my roadie, in black, they are very good.

You may find they are easily knocked when resting the bike up (I've taped the gap on mine up to make them a solid extension of the bars) but they're stable and give a clear vibration free image in use.
OP

steveindenmark said:
But do they work when you are on the bike?
Click to expand...

Yes, surprisingly well. As I said, the mirrors are quite small, but they don't vibrate, or move at all, and if they do get knocked (though they shouldn't as they're no wider than the bars,) they're easy to adjust on the go.

[QUOTE 3462947, member: 259"]So are you able to see well past yourself with these things? I would have thought your body would get in the way?

For a tightwad like me, it's annoying you have to buy a pair though.

They work well. I did think of trying the ones that fasten to the top of your downtube where you look behind between your legs, but they wouldn't work with panniers. These do work for me with panniers, so if you don't have panniers, they're sure to work for you and the body doesn't get in the way at all. As for having to buy a pair, they're so neat, and I think they look better if fitted both sides.
Last edited: 7 Jan 2015

I saw bar end lights on a road bike and the general consensus on here was that you wouldnt be able to see them from behind. I thought the same would apply to these mirrors.
You must log in or register to reply here.
Similar threads