Have had a fairly crap year so far and have ended up broke and staying in West Wales with my daughter.
Audaxes here are way to hilly for me so I have come up with a new (for me) cycling plan.
Touring or more precisely escaping with a tent on my bike for a bit of peace and quiet

First I needed a suitable bike so as I had an unused Kaffenback frame decided to use that
Disc brakes , steel (hopefully strong frame) and I always liked it.
Unlike the London Road that replaced it which lost it's wheels , brakes and mudguards to the new project
Deore 26/36/48 chainset , sora derailleurs , chain and 11-32 cassette were nicked from the Jamis Quest along with a nice carbon seatpost, charge spoon saddle and shimano flat/spd pedals
Had some flat bars with deore shifter / brakes already fitted ( unused and for the life of me I can't remember why I bought them)
Couldn't use my favourite rack because of the discs so cobbled together one from two bendy ones

Put it together in less time than it took to write this and loaded with sleeping bag, bed mat thing and a tent had a quick test ride up the mountain 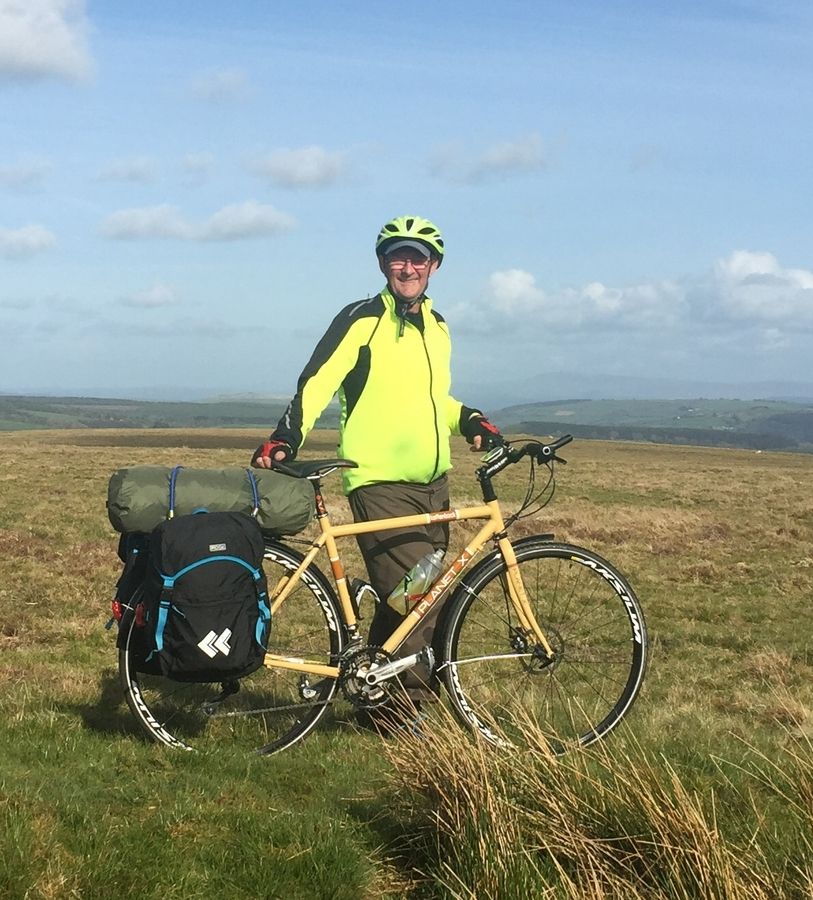 Went quite well , nothing fell off saddle came a bit loose

Bike sorted on Thursday so had a hunt for a campsite about 30 miles away for the weekend
Found one in Gwnfe , if I'm honest it was an easy choice as the cheapest within my set distance
Sorted a route on ride with GPS and loaded the Garmins .

The bike by now was so heavy I couldn't lift the back, so more than 8kg
Ready for the off .... Note the smiles gone as I try to support the monster I've created 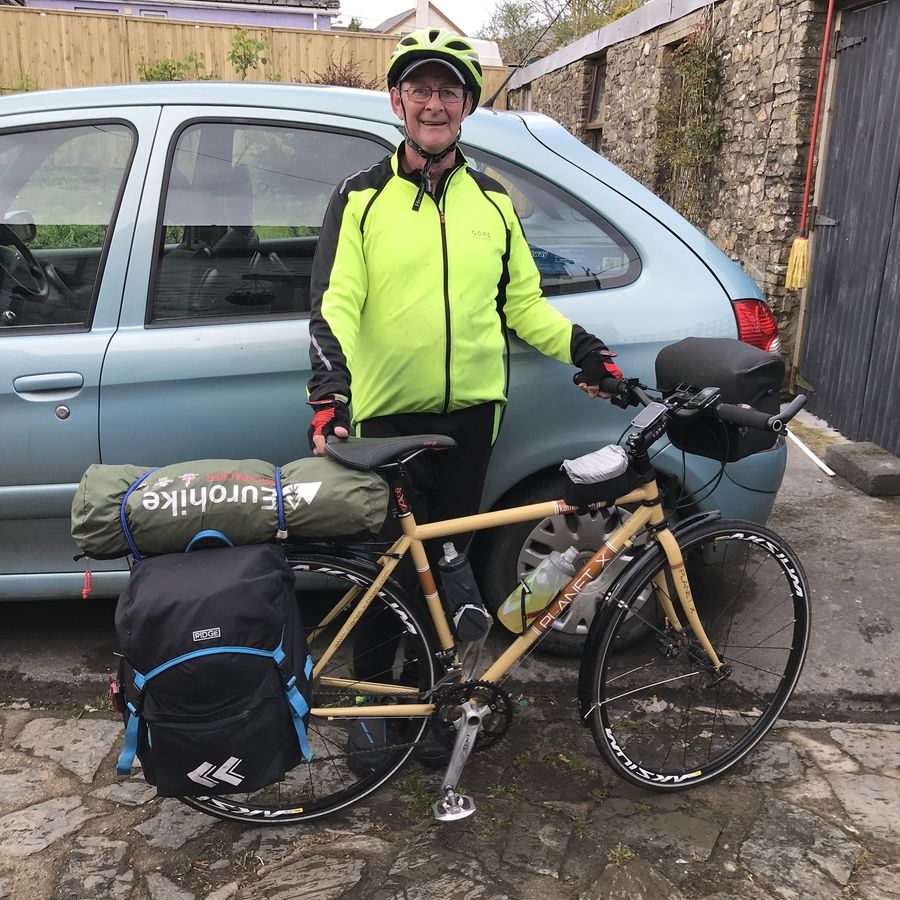 Anyway set off up the hill (everything is uphill in West Wales)
Was in first gear almost from the off and had a short walk within the first half mile.
I discovered pushing a fully laden bike up a 16% incline is as hard as riding it
I ground my way to the top in first gear knowing the next bit was 5 miles of downhill which kept me going
20 miles and about 3 hours later I reached Llandeilo where I stopped for a bag of chips which I ate sat on the wall of a builders merchants
Scenic ? not so much so didn't bother with photos

The ride so far had been fairly easy if slow and I headed off for the last 8 or 9 miles into the campsite in the Brecon Beacons country park
I used to do that Ditchling beacon on my way to and from work so was fairly confident I'd manage
An hour later I was still struggling up that hill , Eventually I got to the village of Gwnfe and went down the steepest hill I'd seen all day to the campsite 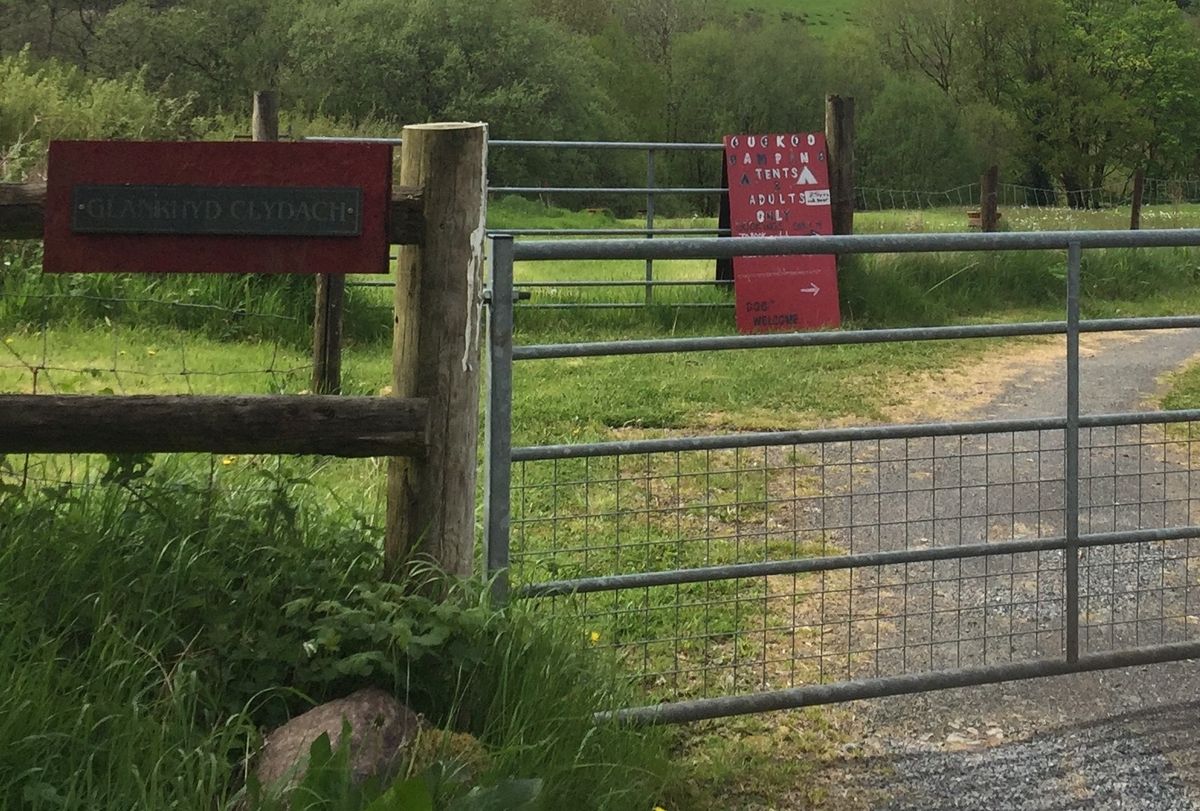 Hard to see from my dodgy picture but theres a long list of prohibited campers
Could be why I was the only guest
I have to say the place was kinda nice.. There was a caravan with toaster, electric kettle and mcrowave
Showers and toilets , was tempted to shower and probably would have if I'd brought a towel
Made a coffee and unloaded the bike 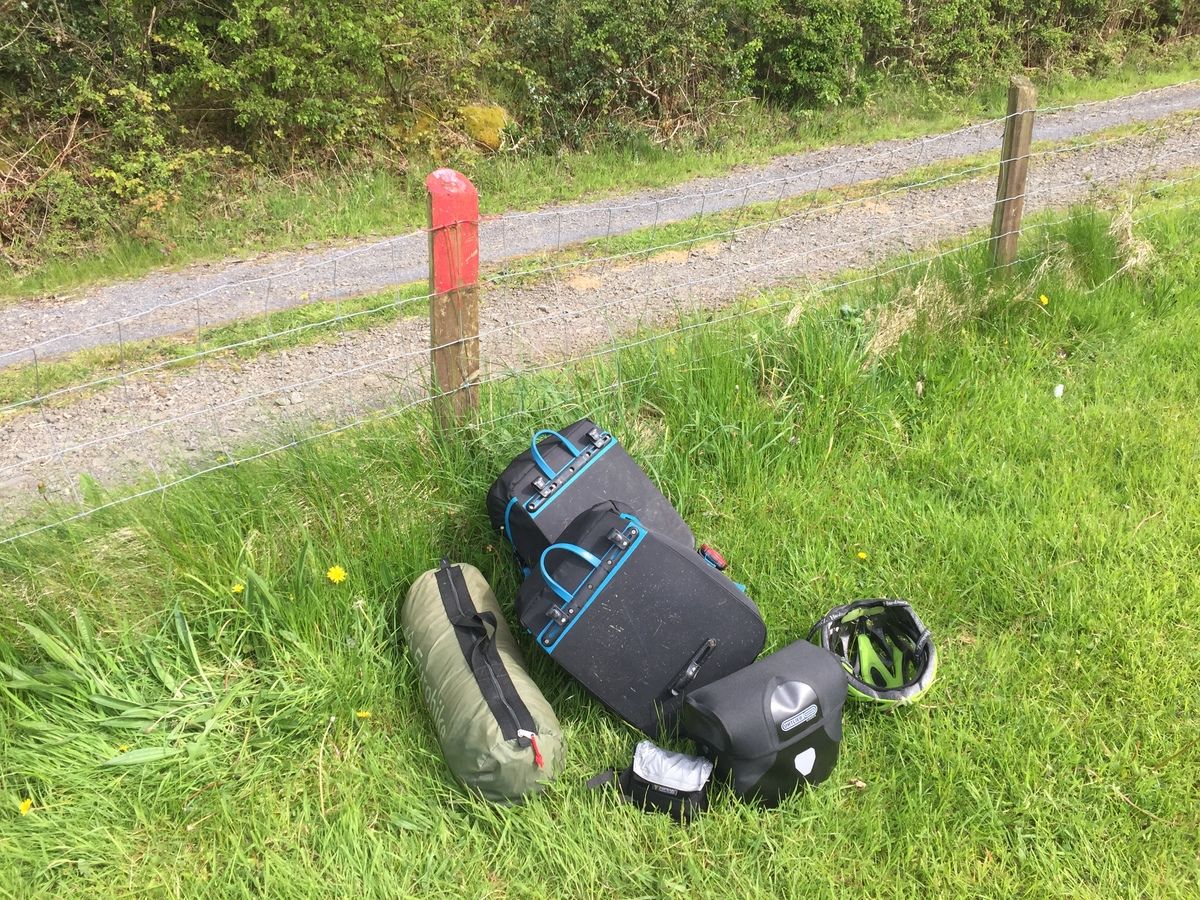 Doesn't look much off the bike .. Tent went up quite easily 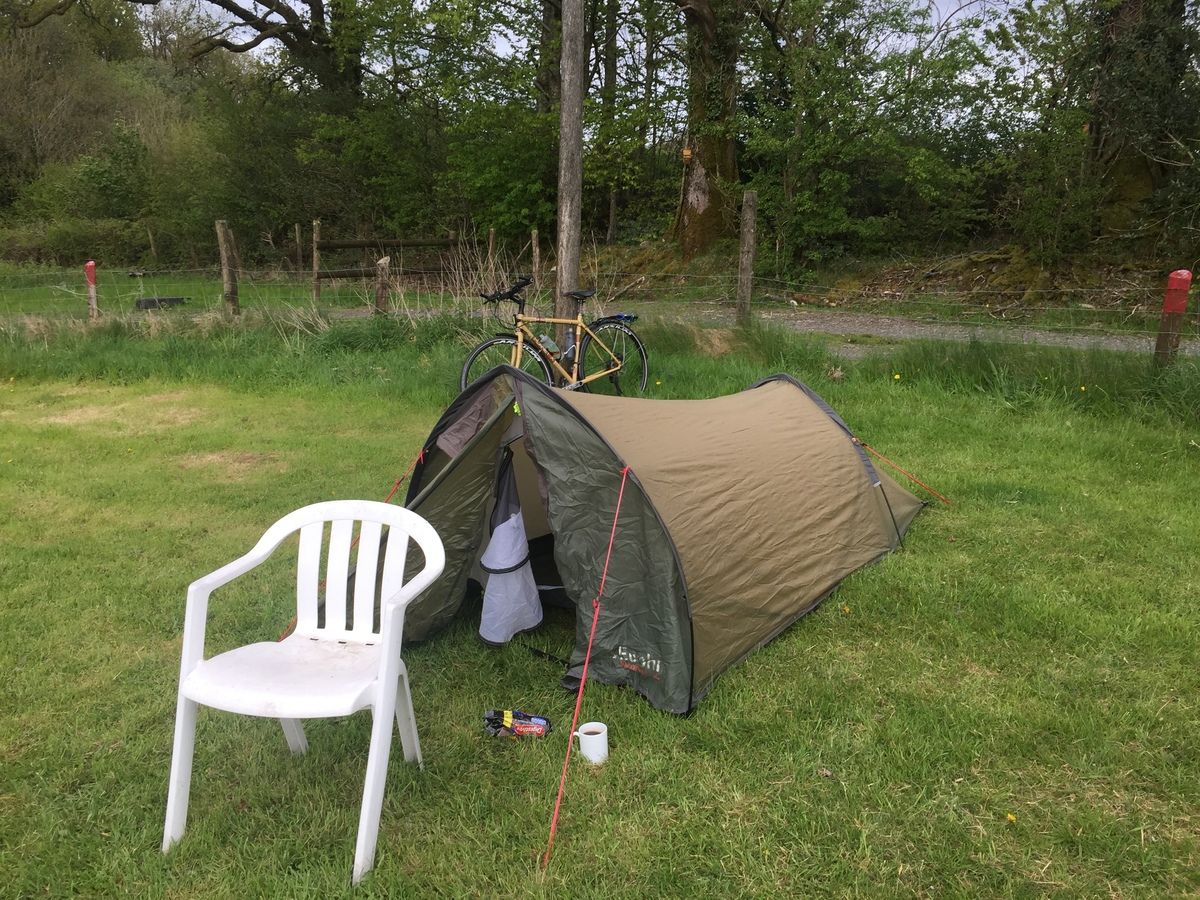 and I got on with the packet of choccy digestives (the chair I pinched from the kitchen area)
After that I ran out of things to do.. There was a pub but it was up the top of that hill
I spilled a cup of coffee in the tent which kept me busy for a bit and damp for a bit longer
I had a phone signal and 3g so messaged everyone I know , and looked at various fora
Had a soggy microwaved pasty lots of sweets and turned in early

I had tho a good nights sleep and the silence was deafening
This morning I headed off home about 9 am
The first hill was a slow business but I had made the route through Llandeilo so I could get some breakfast on the way home.
Seemed worth the extra miles
Nothing was open on a Sunday morning of course so had a cold pasty and water for breakfast

The slog up LLanllwni mountain to home was fairly testing but here I am alive to tell the tale
https://www.strava.com/activities/1569538767

All in all it seems like a success and something I shall be repeating (with less hills)
I shall take a towel next time and escape for 3 or 4 days
Is this the longest write up of the shortest tour ?
Last edited: 13 May 2018

Looks like a good set up. Glad you enjoyed your night away and I hope the rest of your year begins to improve.

A camera is always a good thing to keep you entertained and you have that.

Its good that you are out and about but I have no idea how you can fill those panniers so full fo one night out. But that is part of the learning curve.
OP

I hardly had anything in the panniers @steveindenmark a very bulky sleeping bag filled one .
Maybe I’ll find a smaller one or bigger panniers.
First priority is a new ,stronger rack as that one wobbled alarmingly and almost lost a pannier at one point
Will wear different clothes too.
Wandering round in cycling tights, shoes and bright yellow jacket not a great everyday look.
Am thinking of a few days jaunt around Carmarthenshire,Pembrokeshire and Ceredigion very soon

Hope things get better for you
xx
E

fatjel said:
I hardly had anything in the panniers @steveindenmark a very bulky sleeping bag filled one .
Maybe I’ll find a smaller one or bigger panniers.
First priority is a new ,stronger rack as that one wobbled alarmingly and almost lost a pannier at one point
Will wear different clothes too.
Wandering round in cycling tights, shoes and bright yellow jacket not a great everyday look.
Am thinking of a few days jaunt around Carmarthenshire,Pembrokeshire and Ceredigion very soon
Click to expand...

Great thread @fatjel. Am hoping to do some touring also this year so always useful to hear other experiences.

Hope things improve and keep us up to date with your adventures.

Location
Goa - the land of sun and grass

Enjoyable read but I suspect it wasn't anywhere as enjoyable as actually doing the tour.

Short tours are great: quality time in (and out) of the saddle enjoying your surroundings, be they static or stationary.

Great read. Note to self: I must plan a tour for next year!

@fatjel good read and I hope your year gets better.

micro fibre towels are great for camping - not as fluffy as your usual bath towels, more like using a chammy but very effective and they dry real quick, are very small to pack and cheap, I bought a couple from Decathlon but most sports outlets, aldi and Tesco may have them.

best of luck with your next tour

It's best to start short and slow, see how you go, then plan something more adventurous if it's for you. The first few tours you learn so much about what works for you.

Late to the party, but wanted to add my congratulations on your tour! I like your style!

I second the idea of a micro-fibre towel. Very handy and never underestimate the restorative powers of a shower, especially after a wet day.
For evenings, check out some Podcasts in whatever topic that interests you. If you've a smartphone use whatever podcast app you have and download some before you leave. Entertainment (& education!) on your travels.

Or, if your budget can stretch to it and you like to read, a Kindle is very handy to have. I love to read, but find myself distracted at home. Never thought I'd like a Kindle, but it has numerous advantages over a paper book - not least you can bring your whole library with you without the weight!

Looking forward reading about your next tour!

Sometimes life stinks. Good to see getting out. Like your bike.

As someone planning my first trip I am paranoid about security. What were your worries and how did you sort being on your own and needing to sleep and going into shops etc...?
OP 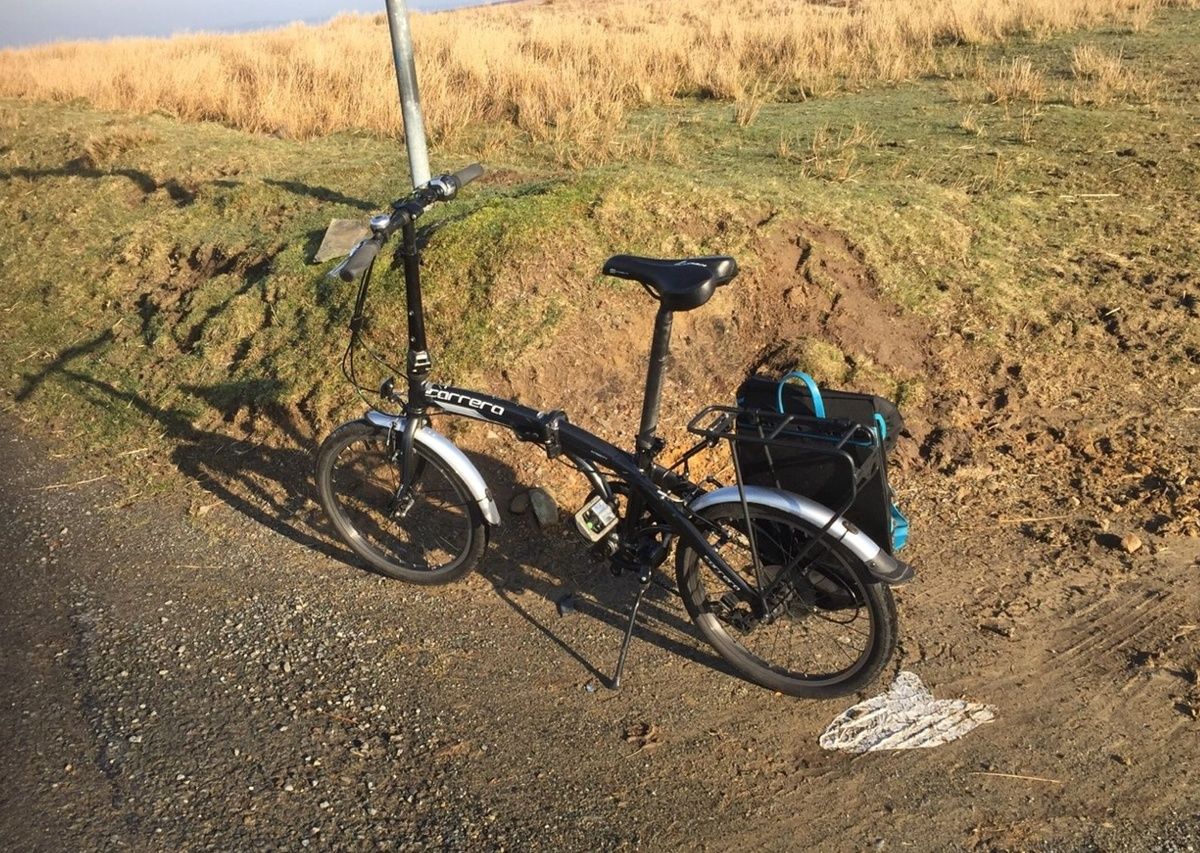 Hiya @Rupie . I answer questions at a similar pace to that which I cycle. Dead slow
I have to say security is a worry.
I usually don't let go of my bike but in a touring situation it's inevitable.
I have a largish combination lock which would deter all but the most dedicated bike thief.
Leaving a loaded bike outside shops seems high risk tho again it can't be avoided
I have yesterday obtained via Ebay a Carerra folding bike which is going to be this years tourer.
It can at least sleep in the tent at night
Last edited: 27 Feb 2019
You must log in or register to reply here.
Share:
Facebook Twitter Reddit Pinterest Tumblr WhatsApp Email Link
Top Bottom