For sale - a nice fixer upper for some one 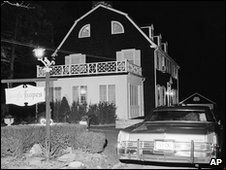 The five-bedroom house at 108 Ocean Avenue, Amityville, gained notoriety through the film based on the story of the Lutz family, who moved in in 1975.

The Lutzes say they soon discovered that the house was haunted.

Several months earlier, six members of another family had been shot and killed as they slept in the house.

The family's eldest son, Ronald DeFeo Jr, was convicted of the 1974 murders.

A book and a series of films based on the events described by the Lutzes followed.

The high asking price of the house - a Dutch Colonial style home overlooking a canal - is based on renovation work, reports say.

It has had several owners since the 1970s. The address has been changed from the original 112 Ocean Avenue in a effort to keep onlookers away.

Amityville (The House On The Hill) - Lovebug Starski

Fnaar said:
Amityville (The House On The Hill) - Lovebug Starski

Lol - that's exactly what went through my mind when I read the OP... but couldn't remember who sang it.

Sh4rkyBloke said:
Lol - that's exactly what went through my mind when I read the OP... but couldn't remember who sang it.

For BFTB: some nice stories.

Some old cars for sale.

A nice gift for the nurses?