I currently have a 10 year old mountain bike with road tyres (Marin Palisades Trail) and I feel the time has come to replace it with something a bit better. Especially after completing the London to Brighton ride. I would like to get something a bit more suited to the type of riding that I do, which is mostly on the road and Sustain Cycle routes (Gravel paths).

I was thinking about buying a Gravel Bike/Cyclocross bike, as that seems a bit more suitable for the road whilst being a bit more sturdy for the occasional gravel route or canal path.

Budget wise, I was thinking of around £2,000, but I'm open to suggestions if there is something for a few hundred more (I'll just have to wait longer for it!

)
Colours: I tend to prefer Blacks, Greys, Reds and Whites. I'm not likely to buy anything that is in your face, such as bright lime green for example.

Features: I would really like hydraulic disc brakes again. After having them on my Marin, I don't want to go back.

One bike that did catch my eye was this...
https://www.rutlandcycling.com/bikes/road-bikes/specialized-diverge-x1-2020-carbon-gravel-bike-black_473575

Not sure if its any good, has known issues or if there is something better, etc.

Any advice would be great! Thanks!

How many gears do you think you'll need, as the one you've linked is a 1x11 set up and a lower end one at that. Is that what you want specifically? You're paying for the brand and the carbon frame. Does it have to be carbon?

I'd personally go for this and save a load of cash. Comes in black. Takes mudguards and rack

Whereabouts are you based, as the best thing to do Is to go to a few local shops and try some out when spending that much cash

At your height, you'll probably want something with a 56cm top tube
Last edited: 20 Oct 2019

To give you my experience I originally came from mountain biking to doing road biking as well in the winter months over the last several years. I have the 2020 diverge sport which is similar but has 2 x 11 gears meaning I have lower gears off road if needed as well as faster gears on road. For this reason I looked at but did not choose the bike you are looking at, and both my mountain bikes have 2 x gearing as it works best for me. It’s purely personal preference.

I have ridden it off road for longer rides down canals, through forestry trails, down a gravel ex railway line track and round a gravel reservoir track. The handling is very good, the brakes are powerful with a lot of control and the future shock noticeably smooths out the bumps. It is only on the rougher stuff you have to slow down and a mountain bike would be better suited. The 38mm tyres also make the ride smoother. So far no issues with the bike.

The decision for me was mainly down to whether the price was worth it for me and having bought the bike I am very pleased with my choice as it is exactly what I was looking for.

https://www.decathlon.co.uk/rc-520-gravel-adventure-bike-105-id_8554425.html
This is a whole lot of bike for the money. Personally, I don’t like disc brakes, on road bikes, but if you want a semi mud plugger, and don’t mind disc brakes, this is a superb bit of kit, and built like an absolute tank.

£2k is quite a budget, why not go Titanium?
Planet X have some superb offerings starting at £1299 for the Picknflick or a rather tasty well specced Tempest for £1799.
https://www.planetx.co.uk/c/q/bikes/titanium-bikes 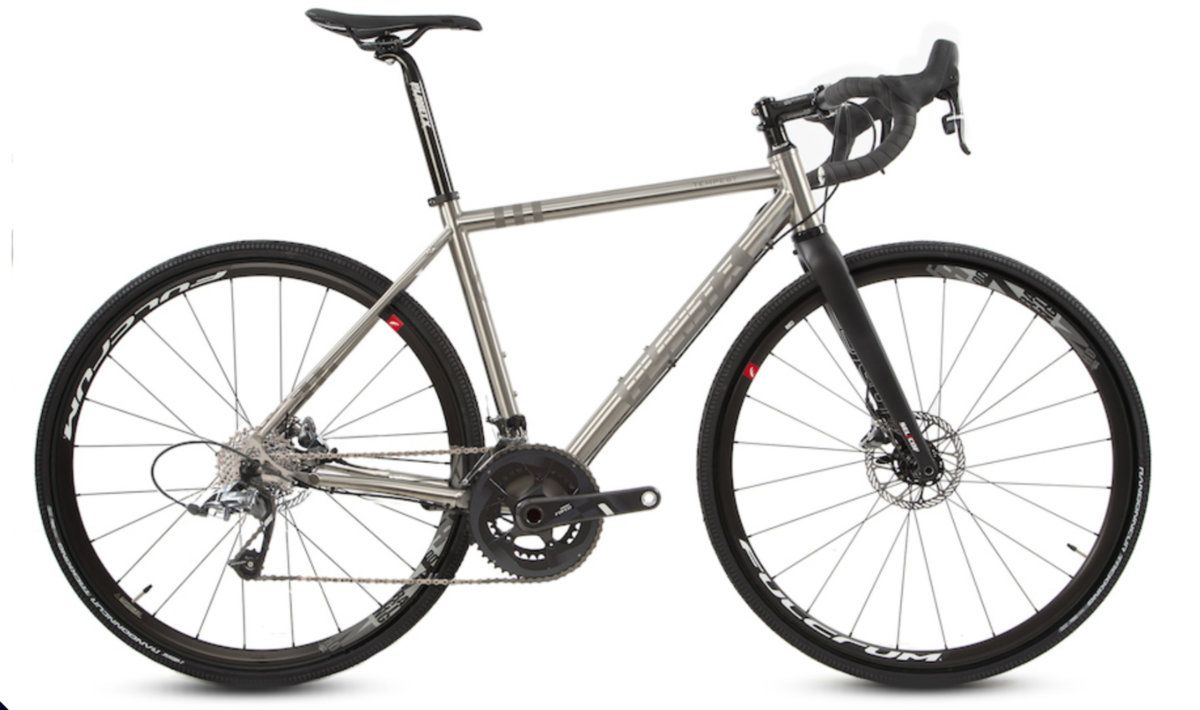 Boardman ADV8.9 £1000 from Halfords. If you have British Cycling membership, you can get 10% of with online voucher(print off take to store). Also Halfords have further discounts ontop
J

Given the description perhaps the Fairlight Secan could suit you and here are some reviews:-

Fairlight Cycles ( https://fairlightcycles.com )
Depending on your priorities either one of the Fairlight bikes could work for you? Also their bikes are available as a frameset only as well as complete bikes. I might be doing them a massive disservice with this overly simplistic (and potentially inaccurate) summary of their bikes range but roughly you have the Faran which could be described as a tough, versatile bike capable of touring as well as much more (but the Faran is currently unavailable). There is the Strael which is I suppose what sometimes gets described these days as an "all road" Bike (whatever that means to people) but if you need an example of that bikes capabilities it has been ridden to victory by James Hayden in two editions of the Transcontinental across Europe unsupported race. Then there is the Secan which is capable of off road gravel riding as well which includes being able to take wider tyres that the Strael and 650b wheels if you want.

Given what you've said about your riding I'd probably think that the Secan would suit you.

You've mentioned your height and inside leg measurements to help with sizing and unlike many other companies Fairlight make it easier and more likely that you'll be able to get a frame which fits you.

For me personally, and this is probably why my next bike will a Fairlight, one of the biggest appeals of their bikes is the fact that they provide two different sized versions of each frame offering both a regular and a tall version. Now although I've been cycling for a long time I've not had many bikes in that time and so I didn't know lots about bike fit and geometries when I bought one of my bikes. Despite the bike shop recommending the size to me I've never got on with it and discomfort problems are exacerbated the longer the ride.

I've since come to realise that for my body shape and style of riding (primarily everyday type riding with commuting, getting to shops and then occaisional longer rides including audax) I'm not personally a fan of a long stretched out 'race' riding position with a stem slammed low on a short top tube because I personally find it uncomfortable.

Fairlight have a principle called Fit Form Function ( https://fairlightcycles.com/why-fairlight/fit-function-form/?v=79cba1185463 ) but basically what the Fit part of it means is that they offer both a regular and tall version of each of their frames meaning that their bikes will provide a good fit to a greater number of people. The following video does a far better explanation of the idea than I ever could:-


And you don't have to be an expert in order to figure out which frame size and version (regular or tall) is correct for you because all you do is select the model of bike that you want from the Fairlight website and then you can enter both your height and inside leg measurement and it will recommend which frame is best for you.

The reason that I've recommended their bikes is because for me personally rather than the particular specs of a bike including the groupset, finishing kit etc., or discount percentage available (which I know are also important considerations for everyone) the most important thing for me with a bike (which I've discovered over time) is the fit and geometry of a bike as well as the functionaility in terms of will it do what you want of it without being a hassle. For example is it easy to fit mudguards and racks to, does it take the tyre widths that I want to use etc..

If you're anywhere near London you can find their bikes at Swift Cycles and they also do bike fits and they take money off a fit if you're buying a bike from them.

As another alternative I had been going to suggest the Temple Cycles Adventure Disc however I think that as a standard build it comes with cable disc brakes but if your were interested in it they do do custom builds and so I've sure they could do hydraulic disc brakes for you.


There's also the Stand Stoater which is just over budget but worth saving for if you like it and it's available in lots of colours for you to get what you want.


Good luck finding the bike that you want.

I'd try out the Temple and the Stoater as mentioned above, but here's a few more that may be of interest....

Or if country of origin doesn't bother you, I'd look at the Kona Libre or Kona Rove. https://www.konaworld.com/libre_dl.cfm
OP
R

Thanks everyone so much for all the advice and suggested bikes.
I've not heard of Planet X before, but I'll be sure to check them out. Also the Fairlight. So many choices now, and I started with none!

Good questions about the gears and frame.

I would like to get a bike of similar weight or lighter, which I think my current Marin is around 10.5kg if memory serves.
Gears, I'm not too sure. I would like around 20-27 again. Actually, it wasn't until I saw the Specialized at Rutland (MK) the other day that I realised it was only a single sprocket on the front, which is probably going to be quite limiting.
J

In respect of the number of gears when you're looking at the types of bike that fit your bill it's unlikely that you'll find one with 27 gears or more because that would require a triple chainring at the front and you're only likely to find that on touring bikes (this for example https://www.templecycles.co.uk/pages/adventure-tour ) which probably wouldn't fit the rest of your criteria if you're looking gravel/cyclocross bikes. Although for example I have a mountain bike with a triple chainring at the front it's a bike from the early to mid nineties and as bikes have got more cogs at the back on the cassette and so increasing the number of gears and companies will spec either double or single chainrings at the front.

However I wouldn't be too concerned about the number of gears and it's more the range or gear ration from easiest to your hardest which is more relevant as to whether it suits you and your riding or not. The greater or wider the range the bigger the jumps can be between gears but if you're not a road racer or then most probably this won't be a big issue for you.

With the types of riding that you've suggested I'd definitely take a look at bikes with the Shimano GRX groupset and I know that you can get Fairlight, Shand and Temple bikes with the groupset but it's a very new groupset and so it's not widely available on loads of bikes just yet.

Happy hunting for your new bike.