I know there are a myriad of 'What saddle?' threads and especially 'What women's saddle?' topics but feel I have to share this little triumph.
[smug mode=I like skol] Lady Skol has been treated to a new bike in the last couple of weeks and insisted that I fitted her old 'comfy' gel saddle that must be around 20yrs old and is shaped like, well, like a pillow wrapped around a wide saddle. I did this hesitantly as in her words this saddle "just about makes cycling bearable". I wasn't happy with this as it isn't a cheap bike and it seems a real shame to ruin it with a cheap, tatty, old, uncomfortable saddle and tarnish her enjoyment of an otherwise well fitted and capable modern bike.
After her 1st ride of around 18 miles she was making the usual noises and complaining about uncomfortable lady bits so I decided enough was enough and bravely ordered her a replacement saddle of my choosing. I have been fantastically happy with my Charge Spoon saddles even though I don't wear cycling specific garments (no padded shorts for me) and often cover 50-100 mile distances. Based on this experience I purchased her a Charge Ladle, the female specific version of the Spoon. When it arrived I eagerly unveiled the new part like a proud cat bringing a half-eaten frog into the house as a present for its owner. The reaction was in some ways probably quite similar.... What's that? It doesn't look very wide. My God, it's rock hard! Unwaveringly I persevered and explained that it might be narrower but it is much flatter at the back so the bit she sits on will suit her feminine bone structure much better and being hard isn't a bad thing as it will hold its shape and thus offer proper support and 'look darling, it's white just like your bike and has girly pinky/purple accents'.
She didn't look very convinced but I fitted it anyway and on Bank Holiday Monday we did our first ride with it. 17 miles of Cheshire lanes and she was still riding along enthusiastically at the end. I didn't make a big deal of it but today she nipped home from work for lunch and during our meal she revealed that even though she hates to admit it, she can hardly tell she went for a bike ride yesterday! [/smug mode]
RESULT! I don't know how Charge do it as these saddles are priced at the lower end of the market but somehow seem to be achieving almost universal approval.
I think that anyone who is suffering saddle discomfort can't do much worse than punting the 20 odd quid these saddles cost delivered to try one out as, even if it isn't the saddle you are looking for, it does appear to fit the bill for an increasing number of cyclists.

I fitted my Spoon to my MTB to see if it could be better for long distance on it. It is staying on.

The only issue I found with it on my road bike was that the Charge logo on the side of the nose, eats it's way through lycra shorts. It isn't a problem with baggies

I tried several saddles on my Focus before settling on a Charge Spoon. It was only £15 new off eBay, so worth a try. I'm well pleased with the comfort of it.
Charge saddles have now been rebranded as 'Fabric'.
I've just ordered a Fabric Scoop to try out. If I'm happy with it, it's going on the Focus and the Spoon will go on my hybrid.

Spoon on all my bikes, except for the road bike which has a knife. I must have a cutlery-shaped arse.

Cubist said:
Spoon on all my bikes, except for the road bike which has a knife. I must have a cutlery-shaped arse.
Click to expand...

Count your blessings, mine has a fork... or thats how it feels!

Strange.... similar thing going on at our house.

Mrs Kes has complained about her saddle being too wide, and almost in desperation she tried one of my Spoons..... Not quite the hoped for panacea, but she now wants to find a saddle the same shape/width as the Spoon, but with a pressure relief channel/cutout.

Sods law of course dictates that this wont be a low cost option like my spoon, and the only suitable saddle will undoubtedly come with dragon-bone rails and a cover made from baby unicorn skins.....still worth it though.

I have a Spoon on my mtb and had it on one of my road bikes for a while, but on longer rides for me it isn't as comfortable as my Arione.

My Arione crucified me after 8 miles each time I tried it - that's why I sold it.
OP

Kestevan said:
Strange.... similar thing going on at our house.

Mrs Kes has complained about her saddle being too wide, and almost in desperation she tried one of my Spoons..... Not quite the hoped for panacea, but she now wants to find a saddle the same shape/width as the Spoon, but with a pressure relief channel/cutout.

Sods law of course dictates that this wont be a low cost option like my spoon, and the only suitable saddle will undoubtedly come with dragon-bone rails and a cover made from baby unicorn skins.....still worth it though.
Click to expand...

Get her on a Ladle if she almost liked the spoon, but here is the key point. When googling/researching ladies saddles one site I visited contained a nugget of information about setting up the Ladle, which I used for Lady Skol's saddle and it seems to work a treat. The trick is to set the saddle to ever so slightly point down at the front, rather than having the nose and tail level as most men seem to prefer. This then allows the sit bones to rest on the flat area at the back while putting much less pressure on the squishy bits. Hang on, I'll take a picture..... 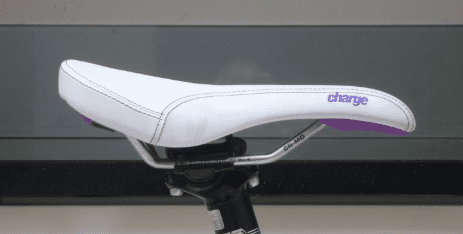 The saddles are made of plastic and, erm, plastic so they don't cost more than the NASA space program and there is a wide choice of colours so it should satisfy the most demanding, image conscious partner

I sniggered at "squishy bits"

The Madison FLux saddle is the same as the spoon btw. They are a little more sedately coloured (white, brown and black obly, but without the bright undersides) but have the same shape. I have two of each on my fleet

Fancy that Charge Spoon myself now - Was going to get a brooks but I'm slightly worried I'd drop £100 and not like it...

I have Charge spoons on all my bikes, total comfort

@I like Skol where did you get her the saddle from? Everywhere I've looked they no longer have them in stock.