Long version: Well, what am I doing here? I went to see my folks early in August, and clocked my old racer rotting in the back of my dad's garage. I've been meaning to liberate it for a while, but it's a bit of a wreck. Last used circa 1988 by a lunatic teenager who hadn't yet passed his driving test...

So, I brought it back to the Midlands with me. The plan was to give it a go to see how much I used it, and buy a decent one if all went well. I replaced the perished tyres with the cheapest I could find on eBay (the inner tubes were, surprisingly, ok). The brake blocks were a bit hard so I replaced those too. I dismantled the brakes, cleaned all the crud off, and mantled them again. The wheels were a bit egg-shaped and a bit battered around the rims from hammering up and down kerbs, but to shell out for a new set of wheels would have cost more than the bike's worth. A lot more.

I rode up and down the (quiet residential) road outside my house. It was horrible. Astonishingly, the confidence I had 20+ years ago had almost completely gone. I was wobbly as hell, especially when trying to fumble through the gears on the down tube. I found it almost impossible to look over my shoulder without falling off. I nearly gave up there and then.

However, since I'm a stubborn old sod, I decided I'd stick with it. My plan was to cut out all the short car journeys, thus saving £££s and (hopefully) shedding lbs. During my brief trial, I noted that the road surface looked very hard and unforgiving. I spend a lot of my time watching professional riders fall off and injure themselves horribly, so I bought a hat. My first trip was to the local car spares shop for a couple of replacement bulbs. Three miles each way. Perfect for a first go.

I staggered into the shop on legs of jelly (there's a fairly decent drag up to the shop). Got served depressingly quickly (I was hoping for a queue and a bit of a rest). Tried to remember if I suffered from pins and needles in my testicles last time I used the bike.

Was fairly sure I didn't. Rode home. All in all, not too bad a start, despite being rather nervous of the busy roads, unable to look over my shoulder properly & uncomfortable as hell.

A day or so later I thought I'd pop round to my mate's house to fetch a book. I set off, got to the hill (actually just a railway bridge) round the corner, and found myself desperately searching for a lower gear. I reached for the lever on the down tube (wobbling like mad), pushed it too far in my haste and shoved the (obviously incorrectly adjusted) rear derailleur into the spokes. This didn't go well. Broke the chain, almost ripped the derailleur off its mount, walked home.

I wasn't happy. I'd spent about £40 on a bike that's worth maybe £5, and only made one trip on it before I killed it (it is no longer worth repairing). I only needed it to last for a few months so I could work out if it was worth buying a new one.

So, I started looking at bikes. I decided I wanted a hybrid, for a number of reasons. Most of my riding will be on roads, but canal towpaths feature widely round here so a bit of light off road capability was required. The more upright position should be better for my bad back, and I'd be able to turn to look behind me more easily. I also felt I needed something a bit more robust than a road bike. I'm 43, 6'3", tipping 17 stone

(I've just had to buy my first pair of trousers with a 38" waist, which was depressing) and have had little to no exercise since I had to stop playing rugby about 16 years ago. Unless darts counts?

After much pontification, I decided on the Globe Work 2012. No point in spending any more until I know if it'll get used properly. I'm already pushing the £500 mark now it's been kitted out with rack, mudguards (can't give myself any excuse not to ride it

), pump, bottle cage, lock, hat, spare tube, trip computer - I haven't even bought lights yet! Found a Specialised shop at Fort Dunlop and ordered it there. They price-matched Evans on the bike.

Anyway, I picked it up today: 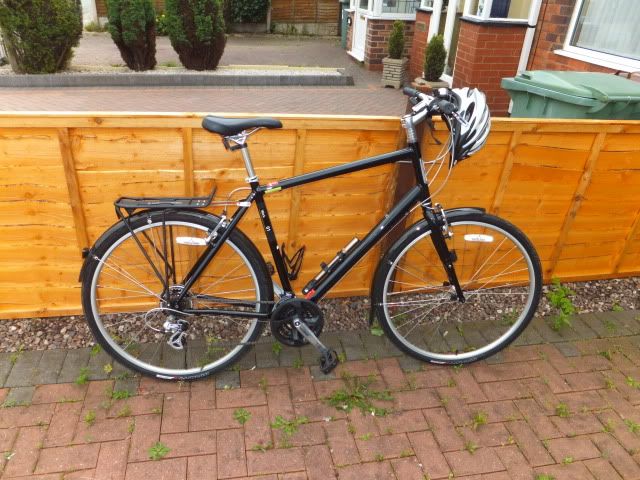 I've been out for an hour on it this afternoon. It seems great. Much more stable than the racer, a better riding position for visibility & easier to look behind me. It needs bar ends and a rear view mirror. Oh, and a frame / saddle bag. And a multitool. The list goes on...

I'd like to know what you think of the bike (even if it's derogatory!), what you'd have gone for instead, and any tips you might have.

Off to start a motivational thread in the Beginners' section. That'll be the hard bit - getting out there when it's cold and wet. Today was lovely, sunny but relatively cool.

P.S. Yes, I do know that my driveway needs weeding.

Bike choice wasn't too bad. You've spent enough to get a decent bike, but not too much such that you are embarassed to take it gently, and you've chosen a make with a good reputation for quality.

Look in the beginners section for inspiration. Many have started like you, struggled for the first ride or two, and suddenly found themselves doing 30 miles and enjoying it. Many other good weight-loss stories on here too, none bigger than gb155's efforts in coming down from 39 stone to 13. I kid you not!

Interesting read... and a welcome from me over here..

Hi and welcome from another Walsall bloke.I'll be on the look out for a 6 foot 3 giant wobbling down the road towards me

BrumJim said:
Many other good weight-loss stories on here too, none bigger than gb155's efforts in coming down from 39 stone to 13. I kid you not!
Click to expand...

Thanks all for the welcome. What are you riding marshmella? How will I know it's you I'm wobbling towards?

Hello and a warm

Your story sounds very similar to mine (here was my first post a few weeks back). I've only had my new bike since the start of August and already 6 weeks later I've found that my confidence, ability and stamina have vastly improved. The first few rides were a bit of a struggle but stick with it and just get out and ride 3 or 4 times a week like I did and i'm sure you'll notice the same improvements within a few weeks.

I also remember having no problems getting on any type of bike as a youngster and having no issues with wobbling about. 20 odd years later and it did feel a little strange to jump back on a bike, especially a thin lightweight road bike. Still have the odd wobble when I try to look back over my shoulder for anything more than a quick glance but it's getting better with each week on the bike.

I've just started communiting to work this week. Rode in on Tuesday, Wednesday and this morning and i'm finding it only takes me 25 minutes to ride the 5 miles into work (there are a couple of decent hills, for me at least though). I've been caught out a couple of times by the rain but to be honest it didn't phase me as much as I exepcted it to. The cold so far is only cold for the first few minutes until my heart starts pumping. Too busy concentraing on the road and traffic around me to think about the cold at the moment I think.

I'm also down to under 16.5 stone now and I feel a lot better for it. I find I have loads more energy and all the aches and pains that I used to have are nearly all gone - granted these have been replaced with aching muscles that I didn't even know I still had....but it's a good type of ache.

The immediate respect that I've gotten from work colleagues and family & friends for doing something about trying to improve myself and sticking to the plan was very unexpected but is hugely rewarding. In fact one colleague has just applied for a cyclescheme voucher after seeing what a difference cycling has made for me after such a short time. After all he probably thinks if I can do it anyone can and he's not wrong. It just takes a bit of courage to get up and do something about it.

The only downside I can see is that this biking lark becomes very addictive and there's always something else that I feel I need to be buying. I also went down the pannier & bag route and have found this really beneficial over carrying the extra weight on my back in a rucksack. Actually there is another downside, none of my clothes fit me anymore, they are all too big.

The only motivation I need to keep riding my bike now the colder weather is coming is that the wife knows just how much i've spent on the bike and all the bits & pieces. I'd never get away with storing it in the garage until next spring

Funnily enough I nearly ended up buying a bike from the Specialized Outlet at the Fort but changed my mind at the last minute when I saw my bike in an LBS in the right frame size.

It will be interesting to hear how you get on so be sure to post back in about a months time to give us all an update on your progress.

I wish you all the best but chances are you'll become hooked just like the rest of us.

Thanks all for the welcome. What are you riding marshmella? How will I know it's you I'm wobbling towards?

Giant Rock MTB 6.25 in the morning going down the Broadway past the Arboretum.
OP

marshmella said:
Giant Rock MTB 6.25 in the morning going down the Broadway past the Arboretum.
Click to expand...

Mind you, on day one I rode up the Broadway from the Arboretum, and it nearly killed me. Made it without stopping though.

A big welcome from Evesham, what a great intro which made me smile.
Just keep plugging away it does get easier. I have only recently restarted at 50 and 19+ stone. I want a road bike but I am waiting for a, surplus cash and b, some weight loss. But most of all I am looking forward to my clothes not fitting me!

Mind you, on day one I rode up the Broadway from the Arboretum, and it nearly killed me. Made it without stopping though.

Thought not at that time, mind i think i only see one other cyclist and that aint every day. Well done on getting up Arbo hill without stopping on your first day aswell.
You must log in or register to reply here.
Similar threads