How to tell if a bike fits?

I'm planning to have an initial look at a used racing bike tomorrow, but I'm not sure if it's 'my size'.

I've been cycling for years, but moved to recumbents a few years ago after suffering from numb fingers on audaxes. Previous to that I'd had a few bikes, including fixies.

I'm about 6ft tall, and my main bike was a 1950's track bike which was around 60cm - which was probably on the larger side, but felt quite traditional. However, this was the bike I was riding when my fingers first went numb.

My winter bike was a 58cm cyclocross bike, but the bars were wider and it felt more of a lumbering beast.

I have an idea of how to set saddle height, but I'm not sure about the optimum reach to the bars or the drop from the saddle to the bars.

The owner is slightly shorter than me, but I think his saddle height is similar, and the bike has a 130cm stem, and it looks like there might be a few inches drop from the saddle to the bars.

I might have a better idea once I see the bike, but I'm just wondering if there is anything to watch out for, and what sort of riding position I should be aiming for. I know it's all a bit vague, and I could probably adapt to anything within reason, but any help would be appreciated!

What actual bike is it? The size label doesn’t really mean a lot without knowing the geometry as there’s no standardised naming convention by size

130cm stem is pretty long, it might be a size too small for you
OP
D

It was made by a builder who's no longer with us, and I don't think it's an off-the-peg frame, so I don't have any geometry for it.

deejayen said:
It was made by a builder who's no longer with us, and I don't think it's an off-the-peg frame, so I don't have any geometry for it.
Click to expand...

56 might be a little small for you if 6ft with a likely instep of 32/34" but would be manageable and nothing you couldn't sort by changing the saddle height/position and stem length/height.
If it's a proper 'racing bike' you might find it a bit too aggressive and maybe not too comfortable. Depends what you're used to.
A pic of the bike and some dimensions would tell a lot.

But old rules are out of favour and tendencies are to smaller frames. Three of my bikes are 56cm and one is even a 54cm.

But on all four, the saddle height is the same and the bars, with different stems are all the same as well.

So no real help, except to assure you that with saddle and stem adjustments, you should be able to get a comfortable position.
Good luck
C 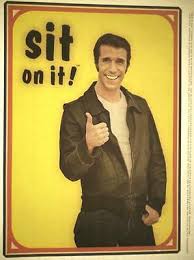 It's a clip from a while ago but I've found it to be pretty good. It's not about science, it's about comfort.

It is difficult to know without knowing the geometry and a current bike to compare against.
My initial thought is that at 6ft tall a 56cm frame would be the correct size, the 130cm stem is long and may need changing but ride it and see how it feels first.
OP
D

Thanks very much! I'll see how it goes - as Sharky says, it should be possible to fit the bike, but I'd rather not end up at the limits. I've had the old-style 24" frame, down to a 56cm, but I can't remember much about them, although I think they seemed fine at the time.

I'm a bit confused. I've discovered that a bike which should be on the small side for me seems to fit very well.
5'10", 32" leg, normally I ride 23.5 inch frames but have found that a 21" frame Holdsworth fits really well !

I need to transfer the measurements to my other bikes.

deejayen said:
Thanks very much! I'll see how it goes - as Sharky says, it should be possible to fit the bike, but I'd rather not end up at the limits. I've had the old-style 24" frame, down to a 56cm, but I can't remember much about them, although I think they seemed fine at the time.
Click to expand...

The trouble is that with modern frame designs, there is no longer a "standard" which will fit you no matter the brand/model.

That would translate to about a 48-49cm, but looking at sizing charts, the size I need varies from 52-56cm depending on brand and model. Many of them don't even tell you what that size is actually a measurement of. You really need to look at the combination of stack and reach, which are both standard measurements.

I actually bought a 53cm Cube, and it seems to be pretty well spot on.
You must log in or register to reply here.
Similar threads