The argument for the fact that bikes are becoming too light must have been demonstrated to ample effect in the sprint finish with the Manx Missile jumping about left to right of a direct straight line course.Never mind all of the wasted energy pulling and tugging on the bars.I don't know what he weighs nor do I know his height.I would guess at 5'3"/5'4" and weighing about 9st/57kgs,in any event all of that on an Ultra Light Road Bike.In my opinion a Top Heavy situation waiting for a Centre Stage Collapse. He is not on his own when it comes to this kind of strange behaviour and bikes that appear to have a mind of their own.Maybe this might call for a whole new approach to how all that pent-up power,energy and determination is transferred from rider down through the pedals to the road.The shortest distance between two points is always a straight line and the power being applied downward has got to be more affective than in the style of a scared rabbit ducking and diving sideways.I am surprised (unless I'm wrong) that there has not been a fatality with this type of manic sprint finishing on ultra light road bikes and stupidly light rims.Put a bit of weight back into the rims and keep them on the ground.Happy & Safe Riding to You All.
J

A 'bunch sprinter' who gains the reputation to 'weave' uncontrollably, will be less likely to be pressured by his opponents.
Knowing that a sprinter might dive sideways will put second thoughts into the mind of any other who thinks of passing him.
Random movements across the lane make it more difficult for that cyclist to be overtaken. The opponent will have to take the LONG way round.

Some commute cyclists, including myself, employ this tactic in narrow road situations. They 'weave' randomly, making the appearance they are struggling, which stops following motorists passing. Infuriating for the motorist, but effective.
M

I'm not really sure bike weight has much to do with it. Abdoujapourov (feel free to correct spelling) was all over the rode 20 years ago and there have been riders before and since who can't or won't hold a line.

Cav's bike is the minimum weight, just under seven kilos, like everyone else in the pro peloton. Once a pure sprinter goes for it his bike is jumping slightly right and left, but it's always been like this. As for the wheel collapsing, you often see that in an accident where the bike tips forward and the whole weight of rider+bike is directly over the front axle alone. Remember the dog running out in front of someone in the Tour, last year or the year before? Same thing happened. And it wasn't the impact with the dog that caused it but just slamming the brake on and the bike tipping forward - impressive though innit? 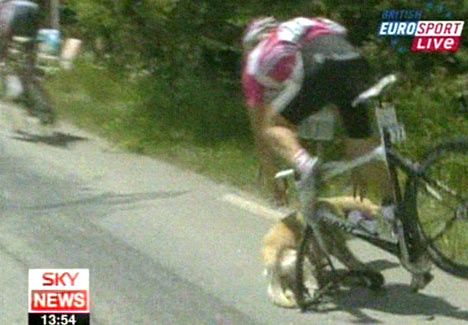 Looking at some of the photo's straight after the intial crash, Cavendish's wheel is straight again as he hits the deck if I am not mistaken, so that must bear testament as to how strong the wheels must be.

I once had a wheel collapse under me 30+ years ago, when I had to stop sharp and my backend lifted too high, resulting in the front wheel bucklling over.

The biggest problem they've got is that the riders are too high up. Now if their backside was only about 30cm off the road and they were in more of a recumbent riding position, say, there'd be less chance of them falling off..................

Bikes are probably easier to control in a sprint now because they are stiffer than they used to be, the same applies on high speed descents. I don't think the weight has anything to do with it.

A great deal is being made of this crash because Cav was involved, all sprinters get involved in spectacular pile-ups many times in their careers, it goes with the job.

TCR, when you're sprinting hard bikes do that, even on a 28lb hybrid you'll move the wheels from one side to the other underneath your centre of balance/gravity. If you keep the wheels straight then you move the CoG/CoB about which uses more power up & also makes you wobble about all over the place.

To my eye every change in road position Cav made was deliberate, he just was to aggressive in trying to move across another rider & so made contact leading to the fall.
OP
OP

Whilst I cannot disagree with a great many of your comments my comments are not anti Cav; they are simply based on my observations of his and other riders aggressive riding styles,it is tantamount to reckless riding behaviour.In my younger days I rode a Vibrant Triangle 19.5" Hetchins on sprints & tubs,the bike then was comparable in weight to my(10.5kgs) Bianchi Gold Race 600 (ID photo).I could go like a stone out of a catapult and none of my cycling mates (club & non club)could hold on to my tail in a sprint for a line or road sign.I was 4'10" & weighed 7st 8lbs(fit as a Butchers Dog) but did not jump all over the road like a scared rabbit.Maybe an unfortunate fatality will be the catalyst to better behaviour similar to those in other competitive sports were death was as a result of another Sportsman being not very Sporting but acting with a blind & aggressive attitude;"I am going to win at any price".Happy & Safe Riding to You All.

TCR, by that description you're probably talking more about the combination of aggressive steering geometry on most bikes & a relatively high sprinting power output. At 12st 8lb on a frame with a 73 deg head tube that weights 12.7kg I find that the bike is very twitchy under sprinting compared to my fixie which is a much smaller frame & so has a 71 deg head tube but is a sub 8kg bike.
OP
OP

GrasB,yes I do believe there is a lot of sense in what you say,a further observation on my part is that the practice of waiting untill the death on the line combined with what looks like quite low gearing to get the punch into the sprint all adds up to the jumping about of the bike.I also rode fixed wheel (double:- Winter Twiddle Gear & Summer Gear) on the same Hetchins before it had road drop-outs fitted and the rear widened for a 5speed block,the was a difference even in those days but nothing like the manic road manners of todays bikes.I wonder if some of these modern day sprinters have the Stamina & Legs to go out sooner and power up to a higher ratio therefore reducing the risks all round.Happy & Safe Riding to You All.
You must log in or register to reply here.

U
A light breeze in Benidorm