The last time I saw or thought about Jock was in 1972, and this popped up on Twitter via the BBMF feed
Jock Hutton

He was a small, extremely fit and very scary WO/2in my basic training company at The Depot, Royal Rhodesia Regiment. 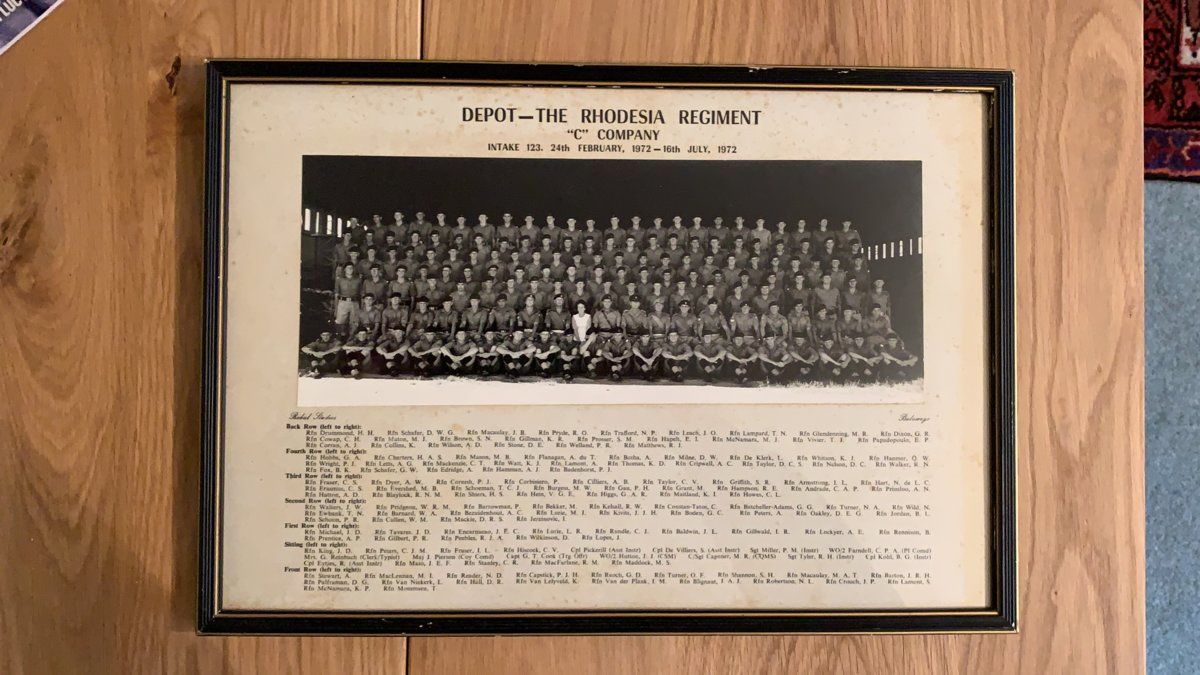 Now the memories are flooding back of the brutal basic training, the most prominent one being getting horribly drunk after the passing out parade, and the next day Jock taking us for a brisk run, the language directed at us was extremely blue but coloured with funny quips.

Did you see any action during the Bush War?
OP
C

A little, I won’t say , as many do that I was in the SAS. We were territorial soldiers and mainly used for patrolling known ingress routes and in stop gaps for bigger raids. Most exciting was when we were dropped in Mozambique to work with the Portuguese army. Their food was streets ahead of ours.

Later we operated with the RAR, a ruthless bunch who went looking for a fight.

CharlesF said:
Later we operated with the RAR, a ruthless bunch who went looking for a fight.
Click to expand...

A bit like my old mob (Royal Green Jackets). Indeed, your regimental crest is reminiscent of the RGJ one, and quite similar to the Gurkhas.

I did 2 tours on N.I. Not as active as the bush wars, but quite intense in its own way

I occasionally meet Rhodesian expats through work, last one I met, probably aged in his late 50s, early 60s perhaps,I helped him fit some equipment and got chatting at length with him. I got the feeling it was a brutal, ugly, no quarters given war...and he did mention a branch that actively went looking for trouble as mentioned by Charles above.

An old friend of mine, ex-Rhodesian army, a year older than me but with manners from a generation earlier, died a few years ago, as he predicted. He was a strange amalgam of contradictory elements: a perfect gentleman and courteous to all folk from all walks of life and all creeds & races. His declared 'hero' was Ian Smith. A thoroughly moral person, to the extent of impoverishing himself rather than going bankrupt to void his debts (having been shafted by more savvy business partners), He devoted himself enthusiastically to various not-quite-successful business ventures, and to all kinds of charitable enterprises, offering his public-speaking expertise free to all & sundry. There's lots more, but the point of the story is that life is complicated.
OP
C

Even back in the conflict, I thought it was more a war of ideology and not race. The Rhodesian side has many blacks supporting them and the Nationalists had whites, often prominent, who believed communism was the right way forward. As always not simple. The war did become very brutal with the Rhodesians facing huge numbers and supported only by South Africa. As soon as SA pulled the money plug, it was over.

White Rhodesians were Calvinistic with strong beliefs of right and wrong, respect for your elders, obedience and so on. It made a strong community but very narrow-minded.

The British government messed up badly by cutting Ian Smith off at the knees like that, IMHO, of course. Prior to the UDI experiment collapsing Rhodesia and Uganda pretty much fed the entire continent between them - now they're both, particularly Zimbabwe, complete liabilities, and look how much death and misery it took to get to today.
OP
C

Exactly, but Uganda is making huge strides to catch up, their tech sector is impressive, as is their medical. I had an interesting chat with a Ugandan plastic surgeon, in Scotland to gain experience but going back home to use the knowledge.

Indeed. Now Amin is put the way the Israelis once again have good relations with Uganda and are helping them along.

I’m not getting further into the politics.

I am remembering a great soldier who gave me untold grief over six weeks trying to mould me into a semblance of a soldier.

The main reason for apartheid was communism okay racism was in there as well. Blacks were under the wings of the Russian and were happy with the idea of communism while the whites were most certainly not.
Of course as is often pointed out black rule was a complete disaster and not lacking in racism.
Once communism failed so did the whole point of (or should I say excuse) for apartheid.

I see an ex 3 para every Saturday in a pub we don't reminisce. i asked a few questions to see if he was a Walt but clearly not. He never bothered to ask me as my questions clearly said I wasn't. It turns out we were both in JPC (Junior Parchute company). An obvious question was about a tour of Sudan, we were put on a sand Bank on the Nile for are R and R And given cans of red hot Mcewens while support company just went up and down the nile in a river boot. I am not sure what A company did wrong! Maybe there wasn't enough room on the river boat for everyone. As you can guess a certain amount of people had to stay sober with loaded weapons for the crocodiles which could clearly be seen (eyes only) circling the island.
One moron refused to jump with the Sudanese paras because they were dangerous! He was standing in front of me watching a jump of mixed sticks. Six 3 para six Sudanese etc etc. They were lifting there feet about 200 foot up a clear statement that that was there first jump. The moron said I will see my company commander I am sure he will understand (something like that) . Everyone looked at each other and assumed he wasn't serious. Refusal to jump in the door gets you six months and out. The army sees no difference in his Refusal to jump the day before getting on the aircraft. He got six months and out. He went to Belfast and joined the IRA but they never trusted him, so they didn't use him other than as a propaganda coup.
I only did two tours of NI, one with battalion (Crossmaglen) and a second, a two year tour as an arms explosives search dog handler again in South Armagh. An annoying place to be with regular "get on the helicopter that left 10 minutes ago" it was nice to get your personal helicopter dropping you off in the middle of nowhere. Its pity I was generally sitting in the door with my feet on the skids with a dog who thought that the change in sound of the helicopter (tail down) meant it was time to get out. Didn't seem to matter that we were couple of hundred feet in the air? Although when we got closer to the ground about 50 foot he would realise and step back!
I always considered the risk of South armagh exaggerated that's obviously in comparison to the op and the bloke I see in the pub on Saturday. He did the Falklands Mount Longdon nowt further to say. Other than I got married and left just before.
Last edited: 16 Aug 2020
N

Oops I only just clicked on the OP's link. Actually 3 para. Not on twitter so not able to go any further. Take it he did a jump with red devils. Respect.
You must log in or register to reply here.
Similar threads