Mountain bike - should I upgrade?

hi all .
I need some advice please . I've got a mountain bike at the moment . A Raleigh bike with shimano gears I believe .,it's well over 15 years old maybe 20 . It sat in shed 10 years before I decided to reuse . Got it serviced and been using it a year now . I'm thinking of replacing it . Have they improved in last 15 years . Will I notice a difference ? I cycle on roads . Will a road bike be better ? . Everyone whizzes past me and I'm blaming the bikes age etc . It's a heavy mountain bike . Was only about £400 when I got it I think .
I'm just wondering now I've been cycling a year whether to upgrade . How much should I expect to pay ? Sorry so many questions
C

If you're riding on the road, then yes, a modern road bike will be wondrous in comparison and even a modern mtn bike will but perhaps not so much on the road.

I may be a bit wrong on price as was years ago .but sure it was around that amount . It's a Raleigh Avalanche . Got it from halfords

I'll just be using the bike for leisure really . At the moment I do about 10 miles sat and sun . Like to do a bit more come summer though . Been keeping it up for a year now . It's mainly fitness and leisure

How heavy is heavy and what tyres have you got on it? The tyres are probably the biggest improvement you can make to an MTB for road use but it'll never be close to a roadster or touring bike. (Others will expound the virtue of road bikes aka racers to us retro throwbacks but they ain't the be all and end all

I ride a heavy mountain bike on the road (similar age to yours) but it's much improved by the addition of drop bars and slick tyres. Of course it's not 'fast' - but I can ride it so that I overtake as often as I am overtaken. The biggest benefit it that it laughs in the face of potholes that made my road bike truly uncomfortable (where I live you don't avoid the potholes, there are too many for that - . you choose which ones you are going to hit) On top of that, it's totally fine with being ridden of curbs (because people who design cycle paths don't ride bikes, and sometimes it's the easiest way back on the road) and through the woods and along canal paths and so on. And I have a wheel-set with knobbly tyres on should I ever want to put them back on.

In short, it depends on what you want the bike to do. If you want to ride as fast as you can on smooth roads and that is more important than comfort and practicality, then get a road bike. If you want to made less frenzied progress, in more comfort, with the option to explore the odd off-road path on a bike that is almost indestructible then you would be hard pressed to beat an old MTB frame with a few modifications.
OP
J

It's mainly on smooth roads but I do bump up and down the odd kerb . It's mainly country roads round my way .i would want to include a panier . Are road bikes more uncomfortable ? At the moment I have big wheels with lots of grip etc . My gears aren't very good . They have always been awkward to change even though I've had it serviced
OP
J

https://www.cyclechat.net/threads/to-upgrade-or-not-to-upgrade.172151/page-2
Is a thread by me not so long ago regarding upgrading an old mtb.
Scwalbe city jets are a decent cheap road tyre you could consider aswell, roll so much better than knobblies.

Upgrading is a good way to go, my giant hard tail is in my lbs as we speak having the crappy sun tour forks replaced by a nice light pair of ridgid forks. I have a few new bits to go on it when I get it back and will continue to improve it when funds allow. Should be like a new bike for a fraction of the cost

I went with Vittoria Randonneur tyres from Decathlon - they've been good so far. Here's a 25 year-old mountain bike turned into comfortable 'do-it-all' bike for not much money. 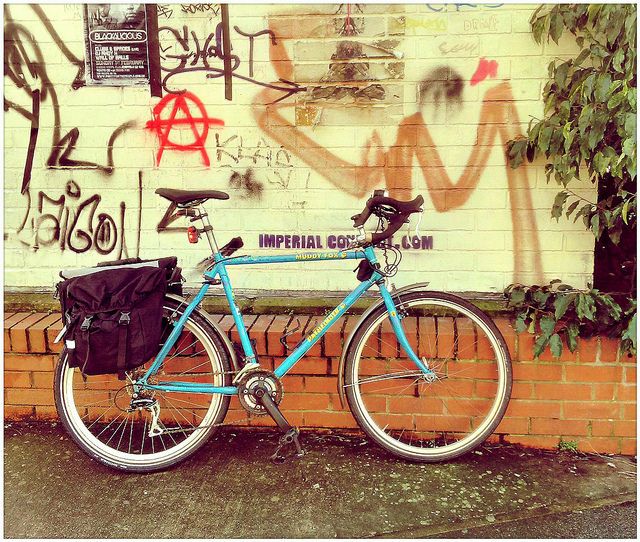 If you are on the road, get a road bike. You won't believe the speed / ability to crush miles compared to a mtb. I made the same change.
You must log in or register to reply here.
Similar threads