I want to convert an old alloy framed mtb into something more useful on the road, i.e. slicks (got them already), mudguards, rack, lights and importantly loose a bit of weight. The current forks are iron, (I won't say steel, because steel can't weigh that much!) But I believe that mtb frames have different size head tube bearings to road bikes. Is it possible to get a rigid carbon fork for the mtb? Or are there lightweight alloy forks instead?

I wouldn't want to use disk brakes, so don't need to consider that option.

Any ideas or suggestions would be much appreciated.

There are two 'standard' heatset sizes (1" and 1 1/8") that have been used on both road bikes and mountainbikes. The larger size was introduced first on mtb but more recently has become the defacto norm on road bikes as well.

Once you know the size you need (it's the ID of the headtube or the OD of the steerer tube plus one eigth), you can then hunt around for forks. But weigh the ones you have first so you can work out if replacement ones are really worth the money. Also don't assume aluminium will be lighter than steel. Cheap aluminium can be just as heavy. Check their weight.
A

One thing to note is whether your frame is "suspension corrected" i.e. designed to work with a taller front end to take suspension forks. Even if the bike came with rigid forks it may have been designed with suspension in mind. If this is the case you will have a narrower choice of replacement forks.

I "commuterised" my Rock Lobster Ti which is an MTB frame corrected for 100mm travel forks, so I got a Kona Project II fork, they are available as standard lenghth or two longer lenghts for suspension correction. I think mine measures 440mm crown to dropout, rather than standard of 390mm (I think), hence the extra tube between crown and where the fork legs attach (see below) 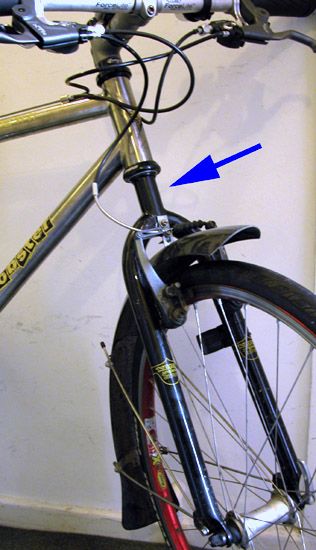 The PII's (triple butted version) were stated as being 750g on the packing, but in fact they weighed 1.1kg uncut, and about 900g after I cut the steerer (I have told Kona about this, they say they will change the packaging).

There are some carbon options, such as Pace or On-One (Planet-X), but they will come out at around 700g so I couldn't justify 3 times the price for a 200g saving, or there are some available from Taiwan that come in under 500g (Tigon?).

If you don't need suspension correction then you have more choice.

I think the PII's are a good fork for the price in triple butted Cr-Mo version, and they may save you some weight (more if you don't need the longer version like I did); they should give you a comfier ride than aluminium which tends to transmit an uncomfortable amount of road buzz. I would go for steel or carbon, but would avoid alu.

i was going to suggest Project II forks.

MTBs can be quite rigid and, with pumped up slicks, could be tad harsh, so go for steel or carbon forks.

I did something similar to commuterise and old Kona. I just put an old pair of P2's on. They weren't sus-modded so the frame ended up somewhat steep and twitchy. However, with a layback seatpost and a shortish stem, it worked out fine (if still a bit twitchy).

don't get alu forks, they're nasty (from experience). get better steel or carbon.
You must log in or register to reply here.