After the sad loss of my 4500 Disc, I was on the look out for a new bike. Went to see loads and very nearly bought something totally over the top for my needs for £1,600, but in the end plumped for this.
I love Treks, never had a bad one, took advice from lots of shops (and from Chris Boardman himself) and went for a 29er.
Even this is probably overkill for me, as my rides are nearly all 'soft roading' and riding to work and back, but having discovered the joys of local bridleways the bigger wheels and Trek's bomb proof bikes, plus a very healthy discount, saw me get this.
Done about 60 miles on it so far and it hasn't disappointed, I'm slowly gaining more bottle on the really boggy bits now and had a few falls and a comedy jumping off half into a bush and half into a massive bog. I don't know how keen I am on only having two chain rings now (I used to use the biggest one on my 4500 most of the time) but I'll just have to get used to it! 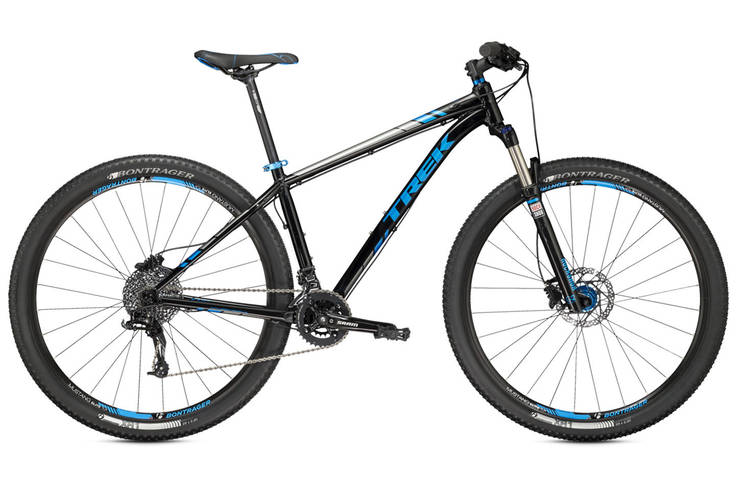 Very impressive, indeed. I'm thinking along those lines due to my size and height. I'm guessing the two chain rings won't be such a problem due to the mahoosive rear cogset.

Location
...Norwich over the water.

Nice. I gave a 29er some thought and then headed in the direction of a CX as I wasn't really using the regular MTB I had.

Nice looking bike, cant go wrong with a Trek in my opinion, I'm a bit of a Trek fan meself, we have four of them in this house. I hope you get many miles of fun with it.

Nice bike. Get it where it's meant to be and give it its head!
View: https://www.youtube.com/watch?v=LvgTuMhyMbI

Many thanks, everyone. I've got a road bike and pondered a CX because there's some really nice ones out there and some bargains. I think what stopped me is I like suspension travel and the bits of off roading I do are probably too harsh for a CX.
I've also now got a (second hand) full suspension bike, which is a lovely thing, but is a bit small for me. I tried it on the commute to work and back and, as anyone else would have realised in advance, it's horrible to use on the road! It's not just because it's too small, but the knobbly tyres etc made it a struggle. I'll keep it for a while though as it should be ok for Llandegla and Delamere.

Thanks for the Langset reservoir link, that looks right up my street and isn't too far (about 1.25 hours) from here, so I'll try that one Saturday.

Seasons greetings to you all and best regards,

I don't normally post on these threads but that is a fine MTB & looks very cool. I'm planning on getting something like it soon. I'm bored of been a roadie so need to mix it up on some single track. Have fun.
You must log in or register to reply here.
Similar threads