The postman rang and gave me this today; 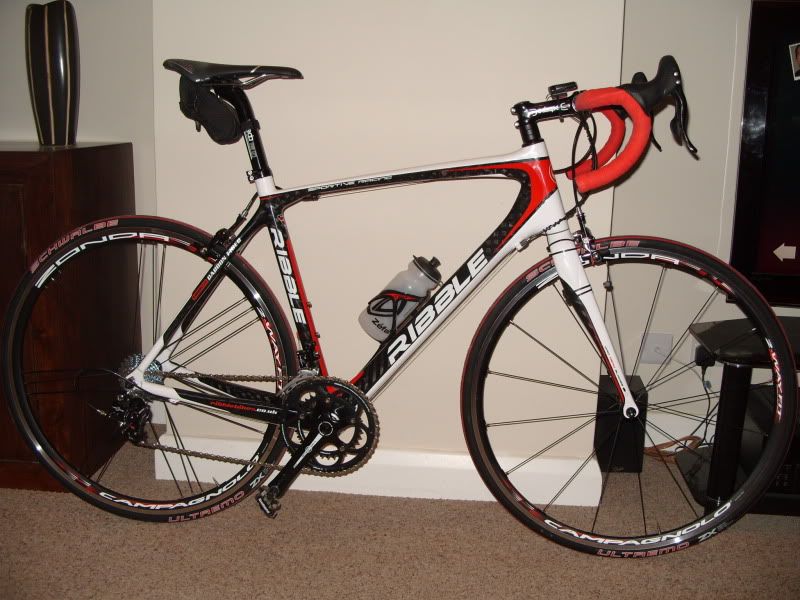 Ribble New Sportive Racing. (Medium frame and 110 stem 5'10" rider) Campag Veloce groupset Zonda wheels Deda bars stem and seatpost Selle Italia SLR saddle.
Took it out of the box had to put bars in stem seat post in and seat on. put my old spd's on and that should be it ready to ride........but;
The rear brake was clamped on I'm guessing they put the cable on and adjusted it with the release pin things on the levers in the open position.
The rear mech cable hadn't been cut it was about 8" long and had no cable end fitted.
The indexing was way out on the rear and I would think if it had been set up on a stand they would have noticed the non trimmed cable.
I don't really care about things like that all easily sorted while I was setting the bike up and putting on a few bits and pieces (puter , bottle cage and saddle bag), But for someone who hasn't got a pair of cable cutters it might have been a bit inconvenient.
I only took the bike for a spin around the block the gears are nice and smooth and the bike feels very light compared to my old Carrera Vanquish.
Can't wait to give it a decent ride out!

ah campag - just makes you feel so good....my veloce is just so responsive...I do look after it though

Can you send the postman round to see me next please ? That's very nice indeed !