Recently, I developed a hankering for two cycling route guides I'd first owned in the early 1980s, when I started cycling in earnest, but since mislaid. Cycling seemed a hard sport/pastime in the early days, especially hills, and I'd concluded touring would be my thing, as racing seemed to be beyond me.

But then I started getting stronger, realised I was actually reasonably good, including on hills. So I got into fast/hard/endurance riding, searching out all the hilly terrain in Britain, then the Alps, and eventually started racing. Somehow those two route guide books got cut adrift, although I continued to explore Britain's roads.....and I would make my own routes from Ordnance Survey maps.

Later, after I stopped racing, I would eagerly acquire great rafts of more modern route guides.....partly to identify new places to ride, partly to remind myself about the areas I'd already explored.

But those two books stayed in my consciousness, and the urge to re-acquire them, and to recapture that part of my youth, kept growing, until I finally decided to hunt them down.....and bought them from Abe Books for the princely total sum of £6. They're in great condition, despite being nearly 40 years old, and exactly as I remember them. The first thing I did was to locate the reference to Cheesefoot Head in the CTC Route Guide, as that book was the first time I'd heard of it, or known it was the huge natural amphitheatre in the South Downs where Eisenhower addressed the Allied troops just before they set off on the D-Day missions. I then went looking for the references in Weekend Cycling to Fat Betty on the Hutton-le-Hole route that I recalled from all those years ago.

The route maps are quaintly simple by today's standards, as is much of the cycle-touring guidance and advice within. And the routes make more use of A roads than would be considered acceptable in today's levels of motorised traffic. But somehow they still have a unique fascination as a reminder of a virtually bygone era of route representation and promulgation, and I've spent several hours perusing them again.

Anyone else got these, or similar style old-fashioned cycling route guides, perhaps from even further back in time? 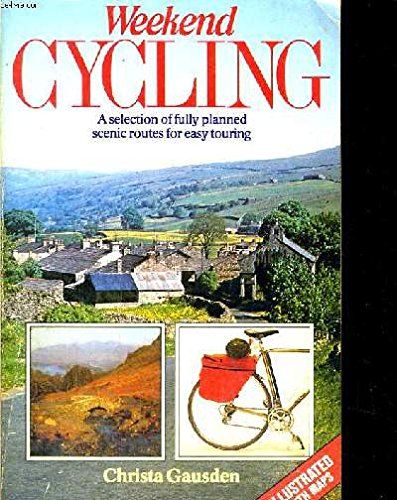 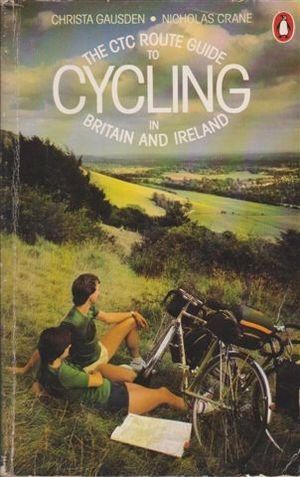 Thanks for making me feel bloody old with your tales of ye olde "bygone era" of the 80s.
B 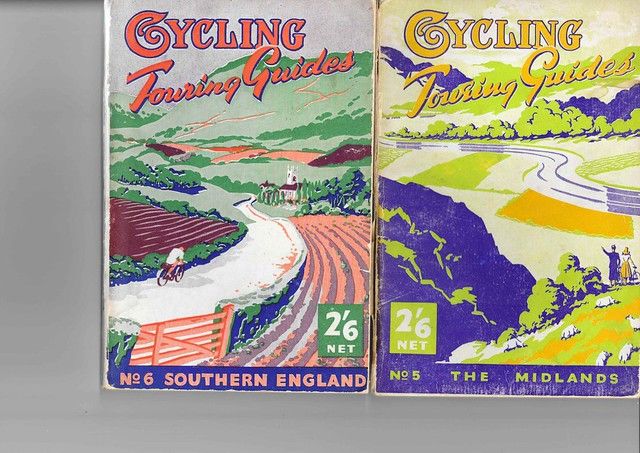 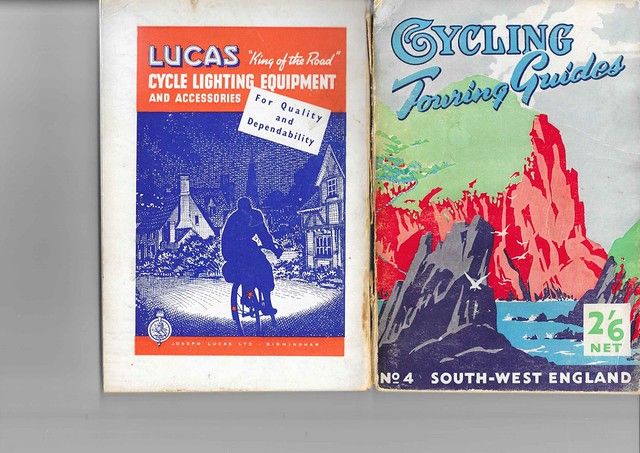 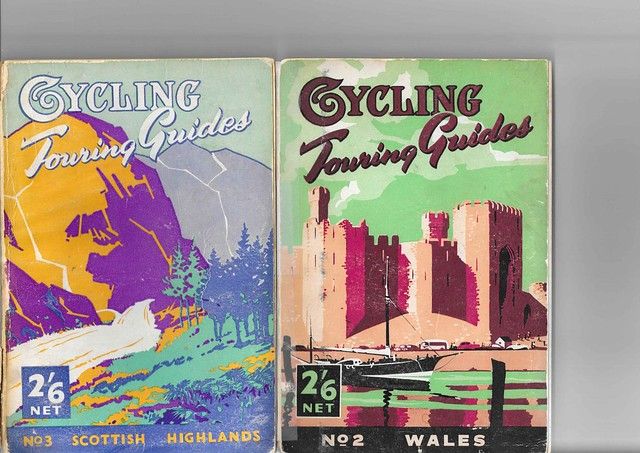 This one also from the 80’s remains viable as a guide but not necessarily as a guide for clothing... 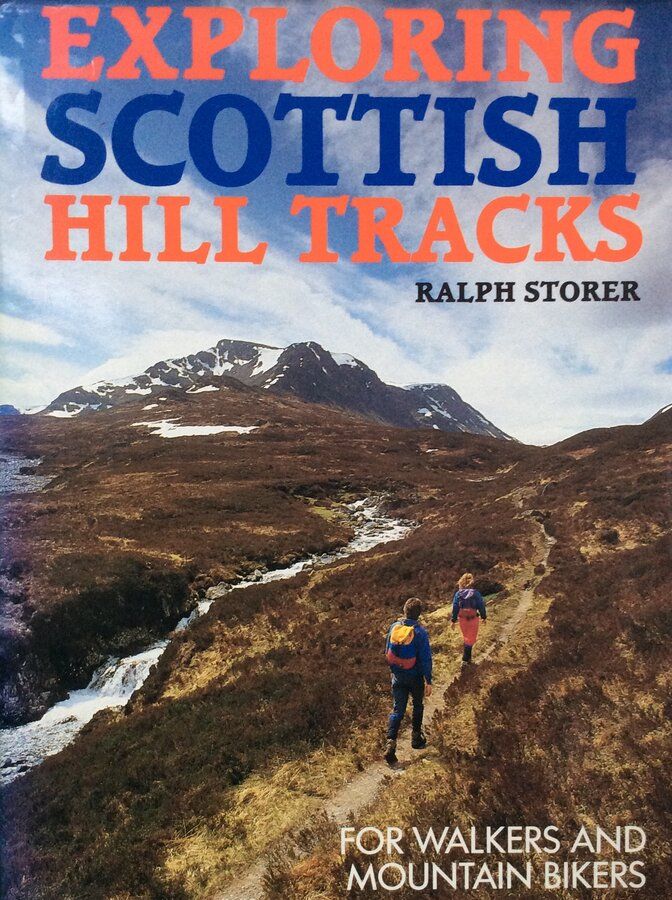 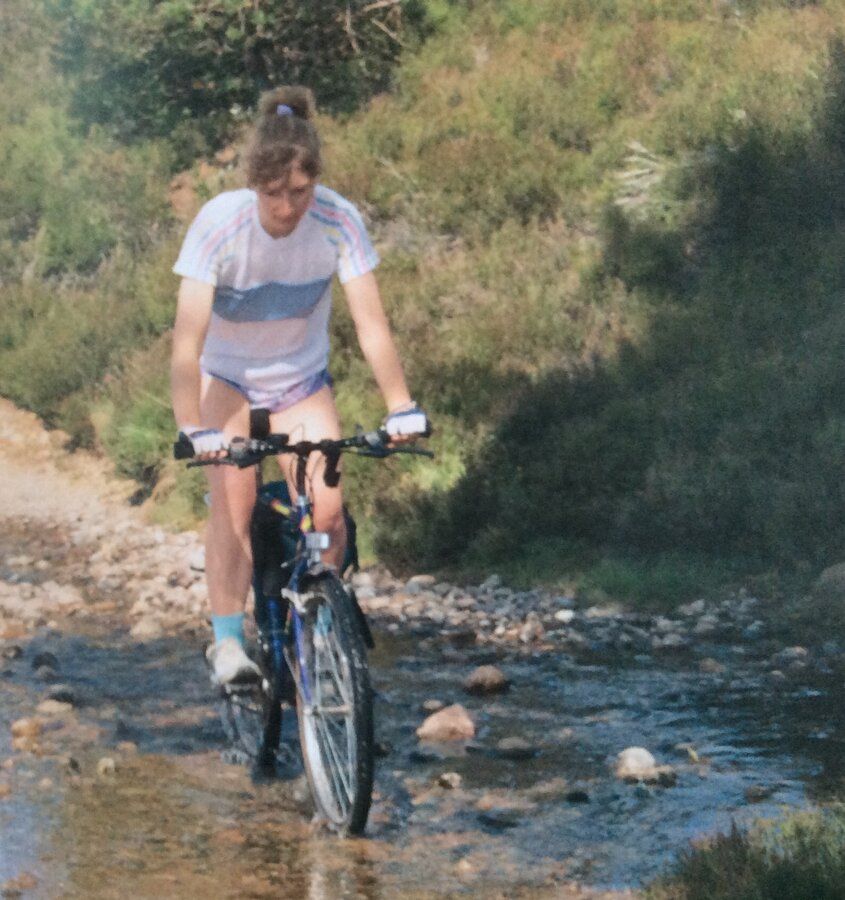 bit of artistic licence methinks in that Lucas lighting literature.

Blimey, is it me or is the straddle cable on her front brake unhooked?

There are several other more modern ones and the last modern one is only in as it may interest our Edinburgh member.
Teach Yourself and the Cycling Manual do not have route suggestions but the others have.
B

From a time when tweed ruled and gears but few and cars? sat nav's and satrav !
Jacksons Cyclist guide to Yorkshire published 1900 . It still has its basic folded map .The time taken to compile it must have involved a lot of riders and print setters . 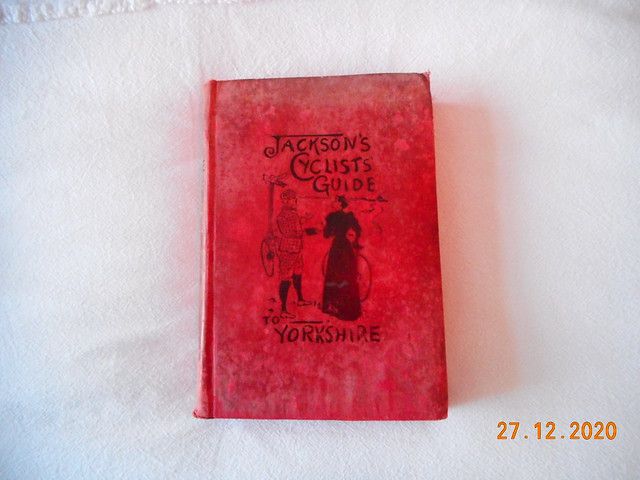 Jacksons Cyclist guide to Yorkshire Dated 1900 by rebalrid, on Flickr

and a little earlier . CTC road books 1,2,& 3 from 1893 to 1897 this was the 2nd edition of the publication . Again the work involved is quite something . The members of the CTC ready pulled the stops out .Each has a cloth map within . They all beloged to one CTC member from the time. Each contained highly detailed place to place routes with indermediate mileages etc 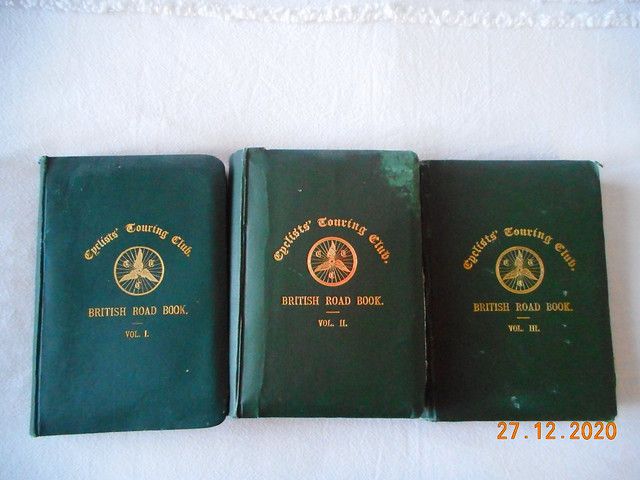 I am reminded of the CTC involvement in Bartholomews maps. If they spotted an inaccuracy in a map, CTC members were encouraged to send in corrections to Bartholomews. They would then correct the printing plates ready for the next issue.
B

The old Bartholomews maps are a work of art imho . All part of the social history of cycling . A vast topic in its self .
OP

bagpuss said:
Jacksons Cyclist guide to Yorkshire published 1900 . It still has its basic folded map .The time taken to compile it must have involved a lot of riders and print setters .

CTC road books 1,2,& 3 from 1893 to 1897 this was the 2nd edition of the publication . Again the work involved is quite something . The members of the CTC ready pulled the stops out .Each has a cloth map within . They all beloged to one CTC member from the time. Each contained highly detailed place to place routes with indermediate mileages etc
Click to expand...

Interesting - thanks for posting those. Curious to know what's inside them! I may try to source an example.....

I seem to remember reading articles by Harold Briercliffe, in the early 80s, in the cycletouring periodical Cycling World, back when it was in tabloid newspaper format rather than the magazine format it later adopted. Peter Knottley too, I think.
OP

Flick of the Elbow said:
This one also from the 80’s remains viable as a guide but not necessarily as a guide for clothing...
Click to expand...

The CTC Route Guide I have, which sets out a very much road-based network of routes right across the UK and Ireland, includes a number of 'alternative' route options - such as the Lairig Ghru in the Cairngorms, with just a casual mention that it may be a bit rough and involve a bit of pushing!

While Weekend Cycling, said on the cover to be a set of scenic routes for 'easy' touring, sends the reader over Hardknott Pass.....(and check out the gearing on the bike on the front cover!).
Last edited: 27 Dec 2020
OP

Agreed. Looks in place to me - the cantilever arms both appear to be in the right position, and there seems to be something visible where the straddle cable would be expected to be.
OP

I think I used to own a book by him too, way back in the 80s. Can't remember what it was called, though.
You must log in or register to reply here.
Similar threads