I took a Sonder Santiago for a test ride this morning and ordered one straight off the bat. SRAM Rival22 Touring spec - a big departure from my current 40-year old steed - and I was wearing a huge grin within 30 meters of the first turn of the pedals.

If it's anything like my last bike, it'll take me months/years of tinkering to be happy enough with the setup to venture far from home, but as the saying goes...best time to plant a tree is yesterday.

The old bike is going to get a resto-mod pampering and we'll remain forever bonded, but crossing the Alps four times is risking knackering my knees, and the brakes just don't cut it nowadays.

And a little aside...I phoned up a couple of weeks ago, knowing that the bike is new to the market and not in a major hurry, to try and arrange a test ride, to be told that they're waiting for a demo bike to be built up. Fair enough. Not having heard back I called back yesterday and asked if there was any progress. Sadly no demo bike, but the guy said that if I popped over I could take his (personal) bike for a spin. As it happened when I got there today they's managed to magic a demo bike from somewhere, but I don't lend my bikes to anyone. Even my pub bike is off limits. I found it hugely endearing that someone would offer to let me try out their bike.

I too have been looking at this model. Just need something a bit more winter adaptable and capable of trail riding, rather than using the giant defy 4 or my nearly twenty year old hybrid all the time for commuting and longer rides.

I would like to hear your comments and review very much. 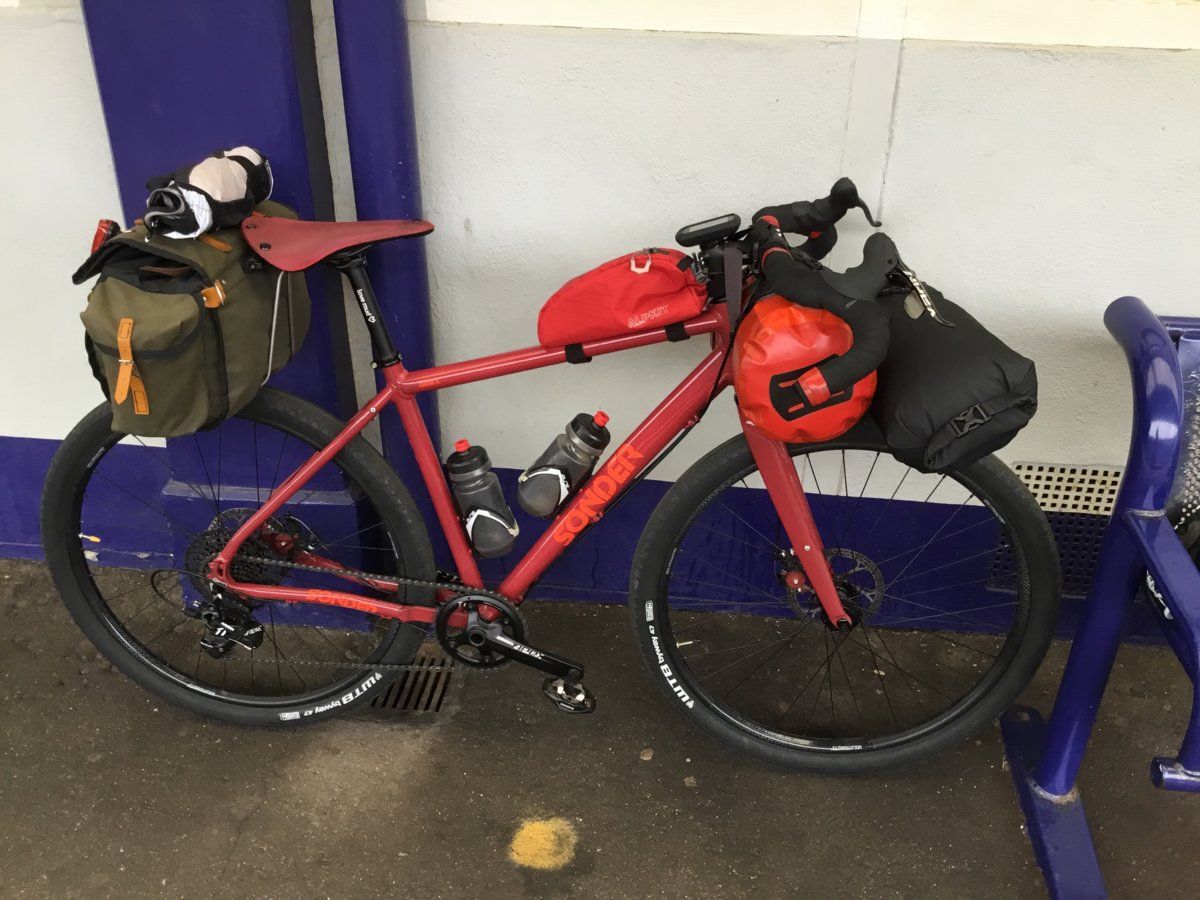 I've got the Camino and if that's anything to go by you won't be disappointed.

I spent four hours today chatting to Richard Hallett. He wrote down a lot of notes and figures and has gone away to start building a new bike for me.
OP

My new bike arrived a week early. Due to me living between Alpkit's Nottingham HQ and the home of the bloke who built up the bike, it was delivered too.

First ride today was along the old railway line up to Rother Valley Park, so grit path. First impression is a firmer ride than my old bike - which is no bad thing. The Santiago swallows the little bumps, but the compressed, hard grit paths around the lake we're quite jarring. Happier on tarmac, towpaths and the loose grit. It's an awesome ride. It feels really grounded, connected.

It took me three tries to get the seat height right, but when I got it, it was a revelation.

The gears are quite wide, and it'll take a while to figure out their limits for touring and all day all road rides.

You might just need to run lower pressures to remove the jarring. With the clearance that will be pretty easy to do.
OP

Yes, that's what I read, but <dumb question alert>are you meant to stop, let some air out, then stop again and pump back to pressure when the terrain changes back?</dumb question>

Cos the ride was fantastic other than for that 300m.

Just get out the tape measure and check against current bike.

It is looking like a trip across to Hathersage will be on the cards for me before too long, I hope.
OP

This bike purchase has made me a big fan of Alpkit as a company. They're a fairly small, fairly local, very helpful lot. I suspect I'll be replacing a few of my dog-eared camping bits over the coming months with them.

I didn't go through with the purchase of the bike, but my impressions of them as a result of our discussions were also wholly positive, as they are of their products I've bought over the years.
OP

I went up a bit of the 5 Pits Trail this afternoon, which is grass and mud. My old RRA can't cope with it. The Pioneer just about manages it. The Santiago took it in it's stride.

Carr Lane up into Palterton was a trial, but that's because I have a lot of work to do to get back to fitness. Under normal conditions the lowest gear would've got me up there with light touring gear.

At the top end, I don't need to worry about getting a road wheelset anytime soon. Zero risk of spinning out.

contadino said:
Yes, that's what I read, but <dumb question alert>are you meant to stop, let some air out, then stop again and pump back to pressure when the terrain changes back?</dumb question>

Cos the ride was fantastic other than for that 300m.
Click to expand...

Nah just take a little out and it will still be fast enough on the road. Pressure is often that balance between speed and comfort. Once you've found something that works well for your routes and bike you are away. A few psi lower rarely affects your speed that much anyway.
OP

First trial overnight run this weekend - 3 days in the Peaks with indoor overnights in Ilam and Castleton. Just my little Carradice bag (can't remember which one it is but it was around 8 kilos when I left home) with the mini rack.

My bum and the saddle are really hitting it off. I once went out on a new Spa Nidd and after 100km I could hardly sit down. In contrast I'm experiencing virtually no discomfort.

The brakes have stopped squealing. The gear range is pretty good. Now used to sram double tap. To my surprise I managed that hill from the bridge in the valley up to Monsal Head without stopping. Didn't try coming home via Curbar but will next time. Climbing from Ashgate into the tops was pretty easy. Well maybe not easy but much easier than my old bike.

Left home with a 135 mile route but actually did 166, so that tells me what I need to know.

contadino said:
To my surprise I managed that hill from the bridge in the valley up to Monsal Head without stopping. Didn't try coming home via Curbar but will next time. Climbing from Ashgate into the tops was pretty easy. Well maybe not easy but much easier than my old bike.
Click to expand...

I was out that way on Saturday, the Monsal Head climb was rather tame for a top 100 climb, I thought. It was testing enough, but top 100? The view back down the valley from the top was great though

We did Curbar too at the end of the day & that was tough, much longer & the road is quite rough in places, that'll sure be a good test for the bike, but sounds like it will cope admirably