Ok so it's a motorcyclist, wearing t shirt, but a crash at 25mph (apparently), that's considerably slower than you or I zooming down a hill! Sobering. Robbed off faceberk. 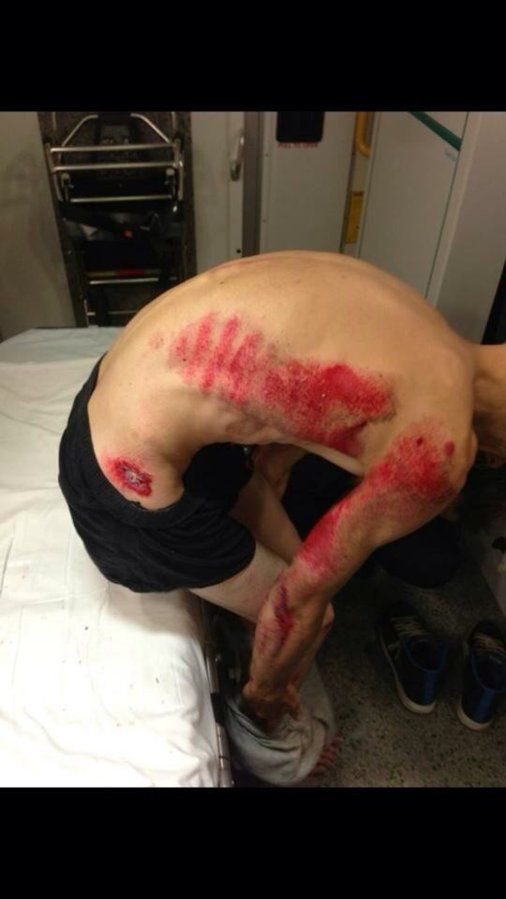 That'll be because he wasn't wearing his leathers. You don't go motorcycling in a T-shirt and shorts.

Just looks like he slid rather than rolled. It's all about the road surface you are on really, he was lucky there was no gravel. It's quite rare to still be 'attached' to the motorbike aside from anything else you try and get away from it because 'things' hitting you (or you hitting things) are going to do a lot more damage than anything else.

The difference in perception of personal clothing between motorbikes and bicycles always interests me considering a fair number of us will think little of 40mph in lycra on a bicycle but would blanche at the idea of 40mph without some protective clothing on a motorbike yet the accidents are likely to be surprisingly similar I would have thought. That said, you can get away with quite a lot with fairly minimal protective clothing on a motorbike, jeans, jacket, helmet, boots, gloves will deal with most things once. My wife's first off was at 70mph on a motorway slip road, she didn't hit anything herself and ended up with two small grazes, one on her back where her jacket rode up (it was a cloth biking jacket and was destroyed though) and one where her Evan's jeans wore through on the knee, they were fine after though. The lid was damaged, gloves and boots were fine though. Also, she rolled rather than slid, which helps providing you keep your limbs in.

w00hoo_kent said:
she rolled rather than slid, which helps providing you keep your limbs in.
Click to expand...

I was once told by a surgeon that it's better to slide. "skin grafts are easy, repairing the breaks and nerve damage from your body rolling is much harder if not impossible to fix"
Speed and not hitting something in the road are both big factors of course. I'd say the guy in the pic above was very lucky.
I'm lucky that in over 30 years of riding motorbikes I've never had a big 'off'.

jazzkat said:
I'm lucky that in over 30 years of riding motorbikes I've never had a big 'off'.
Click to expand...

I've never slid, my offs on motorbikes have all been sufficiently slow that the thing I've hit (generally 'the ground') have stopped me pretty quickly. Then again I did MX, badly, for a few years so had plenty of practice with falling so I've barely damaged anything (one broken bone in a hand. Maybe a broken bone in a foot but probably not, I never had it checked out.) I guess compared to friends, living & dead now, I wouldn't consider any of mine big ones. My wife trashed two ZZR600's in the course of a years riding, one through inexperience (properly trashed, £3500 damage to a £2000 bike having pretty much snapped it in half) and one through over exuberance (theoretically trashed, but almost all plastic so we replaced it with second hand stuff) but walked away from both (eventually, first one saw her airlifted to hospital, but she walked out 2 hours later with no particular injuries). She didn't hit anything in either off, which really is the biggie.

The two occasions I've come off at speed I've lost chunks rather than top layers. Lots of blood, but eventually settled down to fairly discrete scarring. Maybe I bounce/roll rather than slide - I am pretty angular.

User said:
Unless you're a complete and utter twit...
Click to expand...

It's the helmet debate with an engine. I've ridden to the shops in very little, it made me ultra careful and I didn't hoon about in any way, but felt surprisingly good. Similarly I've ridden a motorbike without a helmet, but generally slow stuff, on and off ferries, etc. I know people who would regularly ride in out of the way places sans helmet. It's all what you feel comfortable with, the vast majority of the time I'd not venture out without decent (although not necessarily motorbike specific) trousers, boots, gloves a bike jacket and a full face lid. But then I felt safest with that level of kit. There's no law against going out in a piss pot, pair of leather shorts and some sandals (aside from taste, naturally. Incidentally, something I have seen. The guy appeared from his house, got on his bike, screamed off down the pavement, skipped the kerb on to the road and accelerated off. Nutter in my opinion.)

Guy I worked with and several of his mates went touring europe on bikes, full leathers kit everywhere, even in Spain.
His off happened after he got back and nipped down to the papershop for a pint of milk. Of course he had shed the leathers and ended up with a few cuts and broken ribs where he hit the kerb. He was obviously on familiar ground and unfortunately just switched off for a few seconds.

Neat TCP bath, he'll be as right as rain ... Skinny bugger needs a decent meal too

Once had a guy come flying past me (when I was also on a motorbike) wearing "crocs", shorts and t shirt!

It is a strange one that we wear flimsy lycra top, shorts, and a teeny tiny excuse for a helmet and regularly travel at speeds over 30mph.
Oh well I'm off, semi naked to hurtle down the nearest hill as fast as I possibly can on a cheap bike with unbranded brake calipers and the cheapest tyres I could buy, wish me luck.
C

I have been riding many years, now after i rub table salt in my eyes in the morning before my ride, while im out riding my eyes tend to burn and water like crazy. Can anyone recommend something else i could do? Doctor said that salt is a natural dehydrating material and that it could help with my eyes being too teary, watery but i do believe this has made it worse. When i asked my doctor he said hes the doctor and im the patient and right there should be enough to understand he knows better than I. Guess he told me. Please help.

27 yrs ive had a bike licence and have ridden probably 25 out of those and luckily I've never even dropped a bike, i do recall a riding instructor telling me if you have an off at 30 wearing just light clothing and slide you would be grinding bone in a matter of yards.
You must log in or register to reply here.
Similar threads