[Parenting Question] Leaving them to play...

... on their own. I have been leaving mine to play on her own, with the free roam of the upstairs of the house, gate on the stairs, since she was one. Some have suggested that this is not the responsible thing to do, but I strongly disagree.

She clearly loves her own company, she is up there now having a great time, no idea what she's doing but I am sure that it will take me half an hour to clear it all back up!!

I think that it encourages her to enjoy being on her own for varying periods of time, at the moment I don't leave her for longer than half an hour. Teaches her to be more inventive as she has to learn to entertain herself. And most importantly, it just gives her the chance to be on her own, which she doesn't get very often.

I know that there is a small risk of her hurting herself, I really have not got a clue what she's doing up there and it's just gone silent which is a very bad sign!!

But I can be there is a second or two anyway. And it is a bit of a rest for me after having to look after her since six this morning. So I doubt if I will stop doing it but would love to know what other people do or have done or would/will do.
S

Is that burning I can smell?

sheddy said:
I have known our 17yr old to stay in his room for over 12 hours
Click to expand...

Smokin Joe said:
Is that burning I can smell?

No, it is the smell of a one and a half year old 'painting' on mummy and daddy's wall using her own faeces as paint.

As a dad of three grown up kids...i dont see anything wrong in it.
How old is she dom ?...
She obviously doesnt mind..ie she doesnt scream the place down as soon as your back is turned...indicates to me she is probably well adjusted and content. Thats a credit to you for work already done.
A couple of points...and i realise you will have already thought of them.
Check the room for anything potentially dangerous. If she's going to be on her own for even 5 minutes...it must be safe. Sorry if i'm stating the obvious...but 5 seconds loss of concentration can be so dangerous.

Make sure she has time socialising with other children as well.
C

I think that's the difference between boys & girls: Either of my two at that age, left alone, would've yanked something down from somewhere. Whereas all the girls we knew of the same age used to sit and play quietly and didn't motor off at high speed to the nearest shelf that needed pulling down.
OP
OP

gbb said:
As a dad of three grown up kids...i dont see anything wrong in it.
How old is she dom ?...
She obviously doesnt mind..ie she doesnt scream the place down as soon as your back is turned...indicates to me she is probably well adjusted and content. Thats a credit to you for work already done.
A couple of points...and i realise you will have already thought of them.
Check the room for anything potentially dangerous. If she's going to be on her own for even 5 minutes...it must be safe. Sorry if i'm stating the obvious...but 5 seconds loss of concentration can be so dangerous.

Make sure she has time socialising with other children as well.
Click to expand...

Thanks GBB, firstly congrats on raising three and still being coherent!!

She is a mere fourteen months old, but already seems so grown up!

Far from minding it, she is going up the stairs on her own (probably for a bit of peace and quiet!!

As for anywhere being totally safe, well this is the main point of contention as any room contains hazards for someone of that age. But by and large there is nothing obviously too dangerous around.

The final point about spending time with other kids is not really relevant as she goes to a nursery three days a week.

Finally, I am not going to apologise for whacking a quick photo in of her at Mudchute farm earlier today: 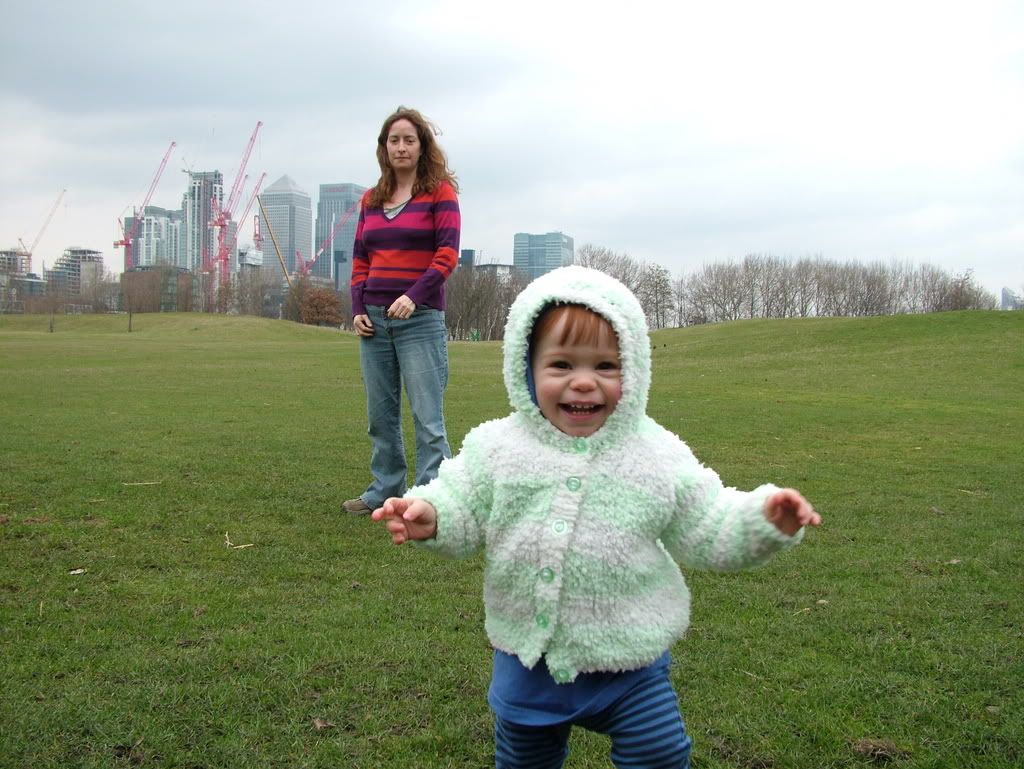 as long as they're both safe and happy, there's nothing wrong with doing that.

Absolutely nothing wrong with this.

As others have said you need to go through anywhere she might access with a fine tooth comb for hazards. Don't forget how fast they grow/change at that age - the climb from floor to bed to window cill that was impossible at Christmas might be a cinch for her by now.

Kids will happily play alone for hours. Bromptonette at eighteen months was tucked up in her travel cot in my parent's spare room c7pm; silence suggested she'd settled immediately. My sis, then childless but possibly broody, peeped round the bedroom door two hours later to see "sleeping" youngster sat up, wearing teddy's hat and animatedly hosting a dolls and bears party.

The only time you need to worry is when it goes quiet and they don't answer when you call their name. A sure sign they are up to no good !!
Y

Thats what I thought too !

Though onto you 'DOM' - sounds like your a great father there DOM, over-parenting a child is a big no-no BUT telling them the rights and worngs of life + the massive aspect of respect to OTHERS is another thing lacking in society !!! and that gets me sooooooooooooooo much !

I have 3 kids. The youngest is 20 months old. She's never left on her own in a room, but I don't think there's anything wrong with what you're doing...I suppose you get a break from the little hand tugging at your shirt sleeve to come and play with her all the time. We all need that break.

Assuming you have one, you might as well stick the baby monitor on. At least you can hear her shuffling around and gurgling to herself etc. If she does start crying, or you hear anything untoward, you'll get to know about it that bit quicker.

It very much depends on the child, and definately if with mates may need more checking up on. They will get upto mischief but in some ways that is part of growing up - friend of mine had to deal with a scorched duvet (turned out a light had fallen onto the duvet during play). But they find out the boundrys by a combination of exploration, testing and hopefully listening. You just have to make sure its the ones without serious consequences that they explore!!!! That moment when they discover that soil/snails don't taste nice - wish I had the camera for that one. And mum will tell you off if you cover the bathroom with talc/bubblebath and as they get older nailvarnish.
If you wrap them up in cotton wool then the world will be a serious shock at some point. But a peek round the door every now and again means you know what she is upto.
You must log in or register to reply here.

Leaving Sky broadband - who to replace them with?