Replaced my freehub, now wheel can turn from backpedling

Hi. I haven't been here for a while because I'm not much use, but if anyone knows what's going here I'd really appreciate a clue.

I had a bit of an issue that my LBS diagnosed as a sticky freehub, so I bought a new one and went off to learn how to replace it. It took a while but I've done it. I think my bearing adjustment is ok; if the QR skewer isn't done up pretty tight there's a little play. Everything seems smooth enough with the bike upside down and works as I'd expect, except that if I backpedal the wheel moves backwards a bit, to the point that it can pick up some speed if I keep at it. I can turn the pedals fine while holding the wheel still and it's also freewheeling properly, so it's not a problem in itself, but I'm concerned that it could indicate something that needs dealing with.

Sounds perfectly normal to me - I assume it only takes a little force holding the wheel for the freehub to start freehubbing? 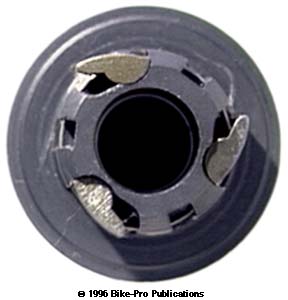 When you pedal forwards the pawls stick out (like above) and engage with the rachet in the hub. However when you turn the pedals backwards they fold down into cavities you see. As they are on springs there is a certain amount of friction between the pawls and the hub and this friction drives the wheel round.

Should be ok as it is.

I assume you get some backward movement. Perfectly normal, hence why you should not stop pedalling, and get fixed. Heh heh.
A

Most probably the new free hub is packed full of grease which is stopping the pawls folding in fully. Should get better after a few miles.
OP

Ok I'm reassured, thanks a lot. I've had my bike and tools in my bedroom all weekend and I'm really happy to put it all away!
S

Yeah, as every one else has told you. It's perfectly normal and nowt to worry about.

My experience - always like that with new freehub/ freewheel. Usually the effect becomes negligible after a while.