Just went to checkout the upcoming 'Howl', about Allen Ginsberg's famous poem, on IMDB, and it scores a not-that-impressive 6.8. Scooby-Doo on the other hand... 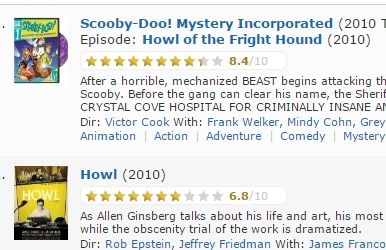 Well, it is the famous episode where Scooby gets framed for terrorising the crystal cove, so it's not just any episode we're talking about here!! It's off the hook!!

I watch Howl on a plane. it was interesting, and respect to Daniel Radcliffe. But ... the weird sequence at the end

Or, to summarise: Scooby doo is probably better!

Scooby Doo finished in 1978. In 1979 Scrappy Doo appeared and the known Universe collapsed, there's no need for this kind of nonsense. I haven't seen the films but I can't believe they're anything as good as the glory days of Hanna Barbera. That other film must be shite if a modern SD film gets a better rating.
You must log in or register to reply here.
Similar threads