The expansion joint on the bridge over the river Aln presents itself as a steel girder, and, alas, has a reasonably deep pothole in front of it.

Hitting this at 30+mph on a tandem is perhaps the worst case scenario for a rim.

Having tested this a couple of days ago I can report:

1. The immediate consequence was both rims suffered dents. The rear was much the worst affected.

2. Remarkably, neither was put out of true whatsoever, despite both having loose spokes, the rear one so loose I initially thought it had snapped.

4. The bike was rideable, the front brake grabbing a bit, but the rear displaying an alarming "bang - bang - bang" on brake application.

On gathering our wits, with a further 50 miles planned, we decided to ride on. The tandem has a rear drum brake, so the rear brake isn't essential (and still worked in extremis), and no significant hills were on the itinerary. 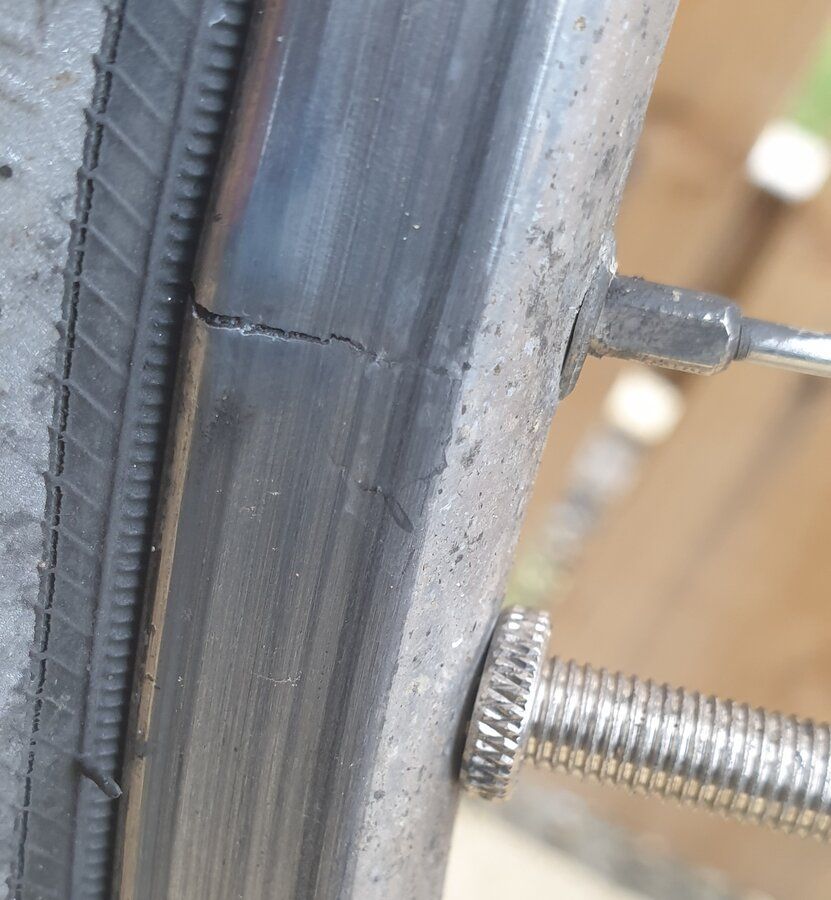 There's a similar crack the other side. Still, the wheel remains perfectly true.

Walking rather than cycling for the rest of the week - and need to source new 48 spoke rims now.

roubaixtuesday said:
The expansion joint on the bridge over the river Aln presents itself as a steel girder, and, alas, has a reasonably deep pothole in front of it.
Click to expand...

Yes, heading North. I didn't spot it at all, thinking we'd just roll over the expansion joint like a cattle grid. A post collision inspection revealed the culprit, but it's not obvious when riding. I think the steel girder presents a much sharper edge than a typical pothole.

So not as bad as this wheel that was brought to me by one of the local kids recently:

What happened? I asked. 'Dunno' he said.
Rim was still true.

If the rim is 26" try the local post office for wheels off some of their old postie bikes, I got a set for my old tandem both front and rear have drum brakes.

Blimey. Have you reported that ? Lesser wheels could have broken catastrophically.
OP
R

They're 700c rims. And yes, I have reported.
You must log in or register to reply here.
Similar threads