To Flag or not to Flag

To Flag or not to Flag?
It was not long after coming to the Dark Side of recumbent biking that I was made to realise that the subject of To Flag or Not Flag was a hot topic among some recumbenteers comparable to Helmets, or Lubrication, or even Helmet Lubrication.

Mostly, I feel conspicuous enough without one. Since I had been anticipating my recent trip to Wales for a while I ordered one to give a sense of occasion. I carefully attached it to the RH seat stay. It came with three sections of fibreglass rod which put the triangular reflective flag at a ridiculous altitude. I ended up using just two sections of rod and even then had to remove the top section until I’d got outside my back gate, which is about the height of a normal door frame.

In use, it is easy to forget it is there until you want to put the bike under cover or through a doorway when the top section can be removed.

Even in normal use it is prone to hit low tree branches if you’re not careful. On the second day’s towpath bashing it was especially annoying catching on tree branches and twanging and pinging under canal bridges. Fortunately it is flexy enough not to be damaged but every so often it would catch you out. There were signs at intervals reminding anglers about overhead power lines but they were high enough to be well clear of my flag. 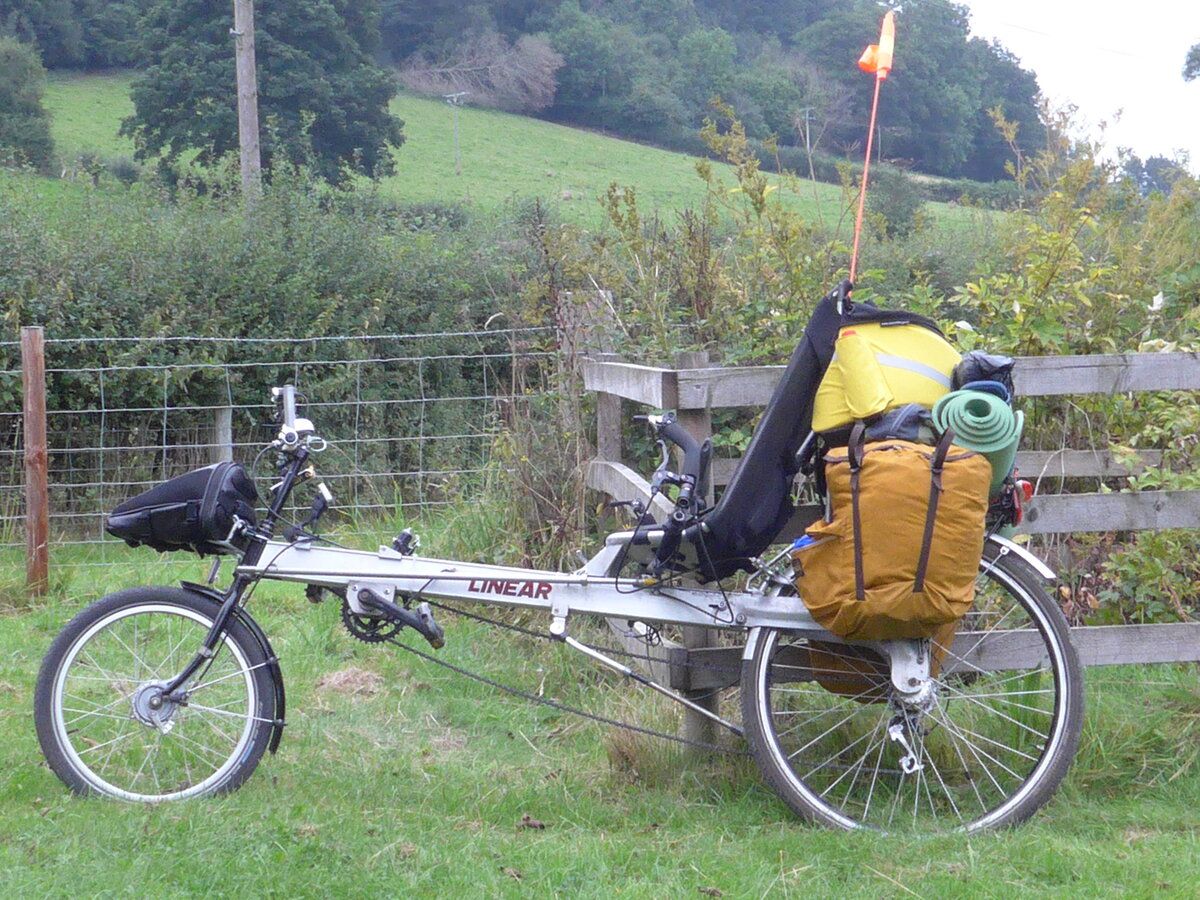 Apologies for re using this picture but it's the only one with a decent view of the Linear with the flag on.

Hard to say really whether it had any effect on other road users. I had no hairy moments but then I've had none without it. Conceivably if used on my Dawes Low Rider once I get it into regular use it might make a difference as it's er...low, certainly lower than the Linear, though I would have to use it for a while without before using it with a flag to get some comparison.

I think for me, at least, it’s something for special occasions only, not for general use. I doubt that drag would be a factor. I usually have a cone shaped bag on the front rack which can take a cape or jacket and a Radical tail bag but I don’t think that I am going to be troubled by excess speed.
B

I have never used a flag on any of my recumbents; I invariably leave a bright rear light on in daylight/ at all times, and the brightest i have found recently is the Exposure Tracer Reakt. I do feel quite safe with that commuting and generally on my Street Machine etc.

Flag user here, it's like a helmet.....makes "me" feel safer 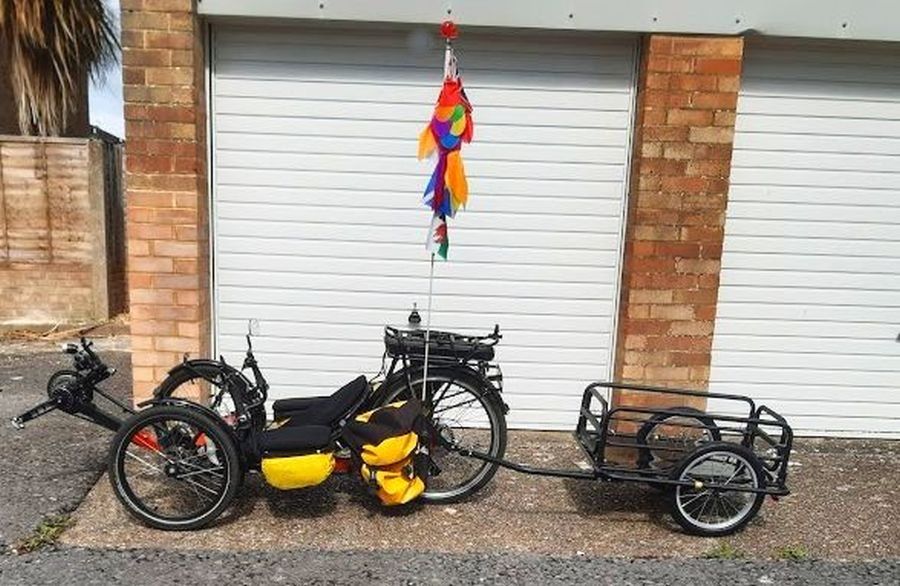 One thing to watch out for if using a flag is horses as it frightens them and some owners have shouted at me as they think I have it just for a bit of fun and not for my safety.
Last edited: 22 Sep 2021

I normally use a flag as well as front and rear lights. I sit pretty low and it does get peoples attention I think. I particularly feel that it helps when in town in traffic.

When I ride with a group or in an event with lots of riders I do not use it, because I feel the other riders help with my visibility.

Here is the trike with a strong crosswind. 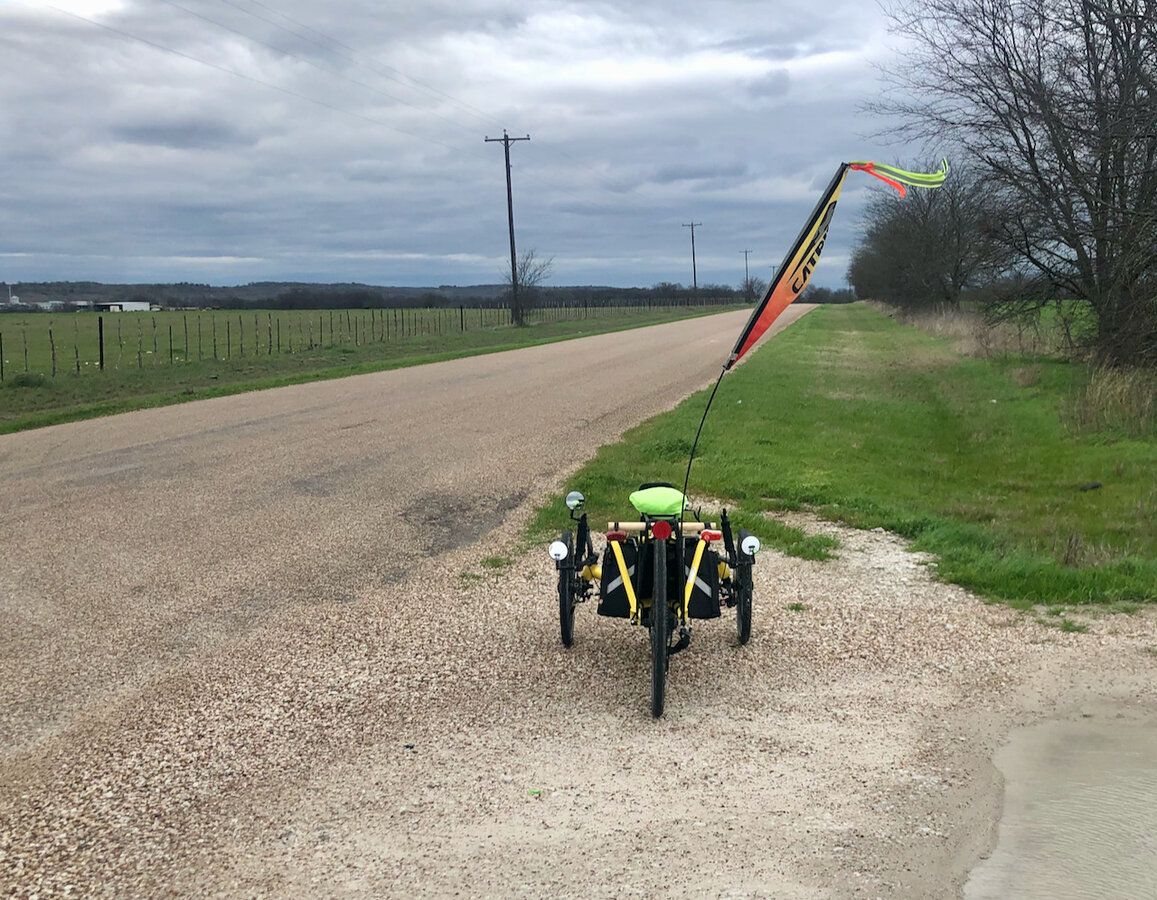 This reminds me of years back when I commuted on the North Circular Road. Quite often I used to see a cyclist (not recumbent) who had a pole much like on @a.twiddler 's recumbent but instead of a flag, he had a yellow rotating light attached to it. This thread reminds me of that cyclist and I wish I had a chance to have a tea and chat with him.

I have a flag on my Nacza Fuego lowrider 'bent and its main purpose is for the car behind the car behind me. The one immediately behind can see me and is going slowly if required. The one behind that one wouldn't see me otherwise and is more likely to get stroppy and annoyed with the person going so slowly, leading to a possible dangerous overtake.

As has been said, always stop and 'handle' or remove flag when around horses and always talk to the rider if approaching from the rear.

In 30 odd yrs of recumbent riding, I have nearly always had a flag, I don't know if it helps or not, but some who have followed me on upwro gs have complained it has got into their face, in its various configurations, it's never been to big , in my view,but I feel it's safer to fly one than not
I am not of the opinion that flags scare horses, but I believe recumbents do, I speak to the horse so it can recognise me as a human & prefer to stop, and talk to horse and rider giving the rider a chance to reassure the horse.
I once came round a bend ,unsighted and upset a horse, was travelling at speed, hiking out as you do,I became aware I had caused a commotion ,but little I could do
B

Its very strange because all my friends who have ever seen me on a recumbent ALWAYs swear blind that I have a flag.... but I have never had one! I do agree about horses and recumbents; they get spooked by them...

I do have a flag on my trike as there are some corners where I normally ride with bad sight lines if you are low down. The flag waving can be seen by oncoming traffic on the single track road before the trike is visible. No real idea if it really works but it is better than nothing. For a flagpole I use a cheap fishing rod found in a skip suitably adapted.
I use flashing lights back and front in poor visibility which I think are effective so long as you are visible.
The strobe idea on a pole sounds good and I will search about for something.
4

I’ve never thought about a flag on my two wheel recumbents but have always had them on my trikes… especially as I have gradually moved towards ones that are ever lower and stretched out.
You must log in or register to reply here.
Similar threads