The camo design is beyond cool.

AndyRM said:
The camo design is beyond cool.
Click to expand...

I hate to say I’m not a fan of that, probably my age! But I love the bike.

Gunk said:
I hate to say I’m not a fan of that, probably my age! But I love the bike.
Click to expand...

Be boring if we all liked the same things. I'm not a fan of Bromptons, so I reckon there's a good balance going on here.
OP

Some Jagwire pro mtb brake cables also arrived yesterday, so this evening I re-cabled the little Brompton and fitted the rear light.

Whilst re-cabling I also swapped out the flexible v-brake noodles for solid ones - the flexible ones introduced far more friction that I had hoped. By swapping back to the standard noodles, fitting the jagwire cables and modifying the routing slightly I've managed to reduce friction significantly and have positive feeling brakes for the first time on this build

For the rear light I've heat shrunk the connectors and run the cables down the seatstay then through the chainstay with the Di2 gear cable. Here it is before I took out the slack and cable tied everything back together... 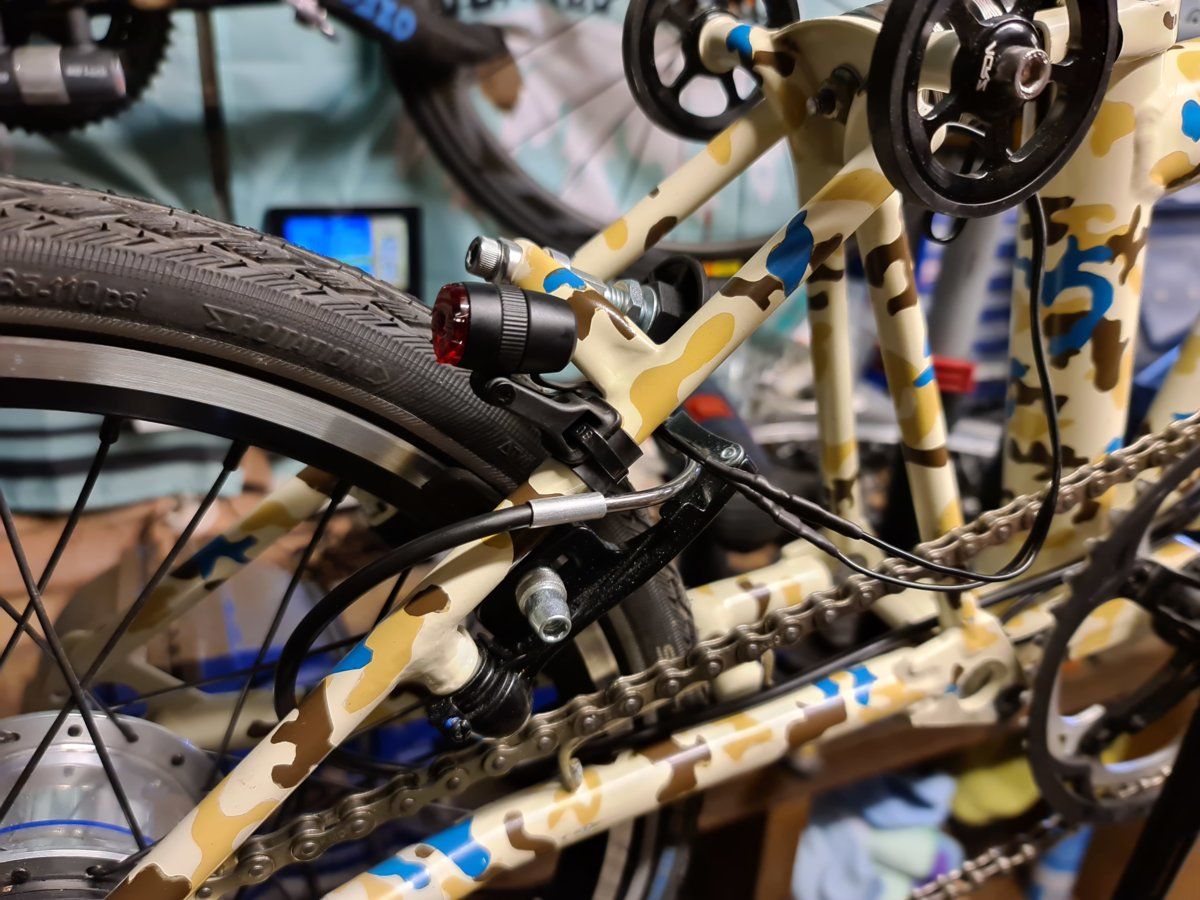 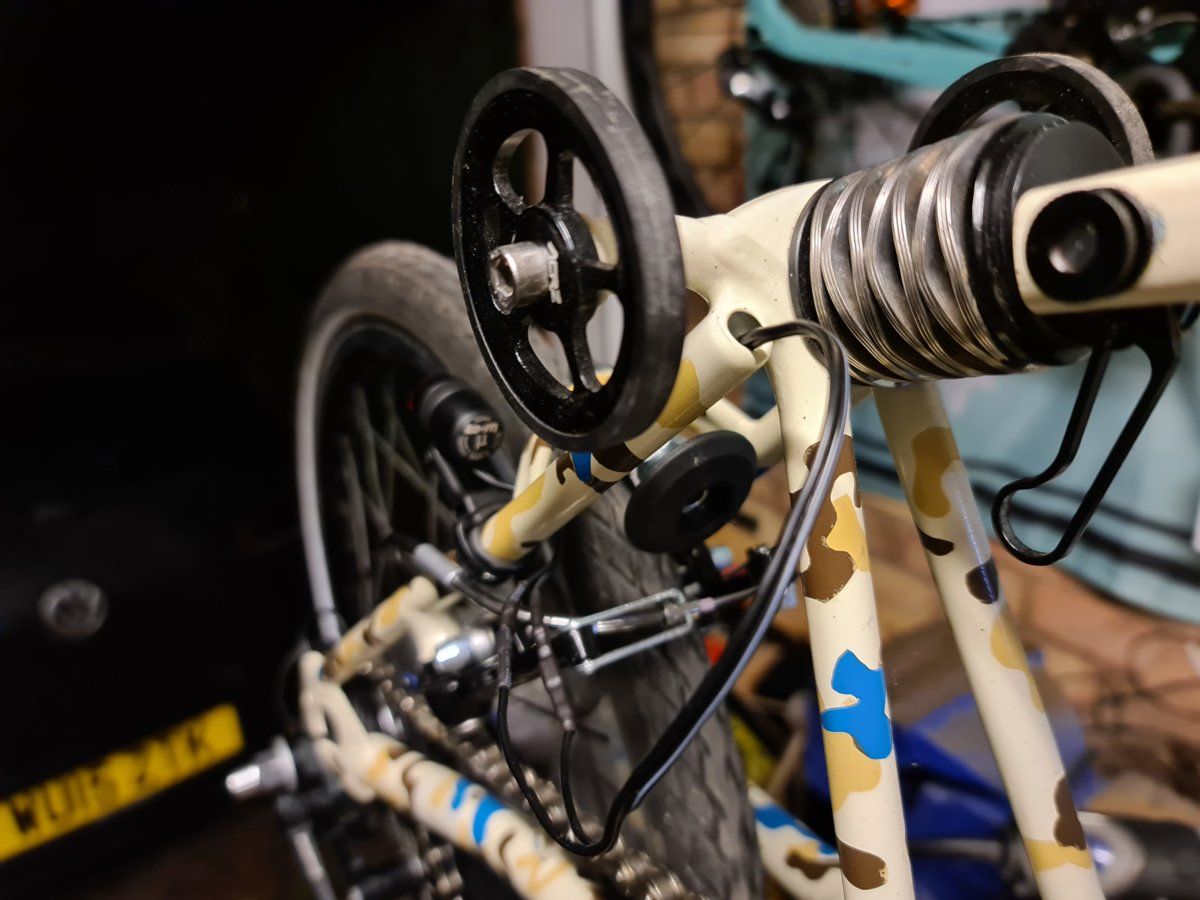 It then follows the brake cable up to around level with the stem hinge before doubling back and running down the front brake cable where I've soldered the joint and again heat shrunk over the top. 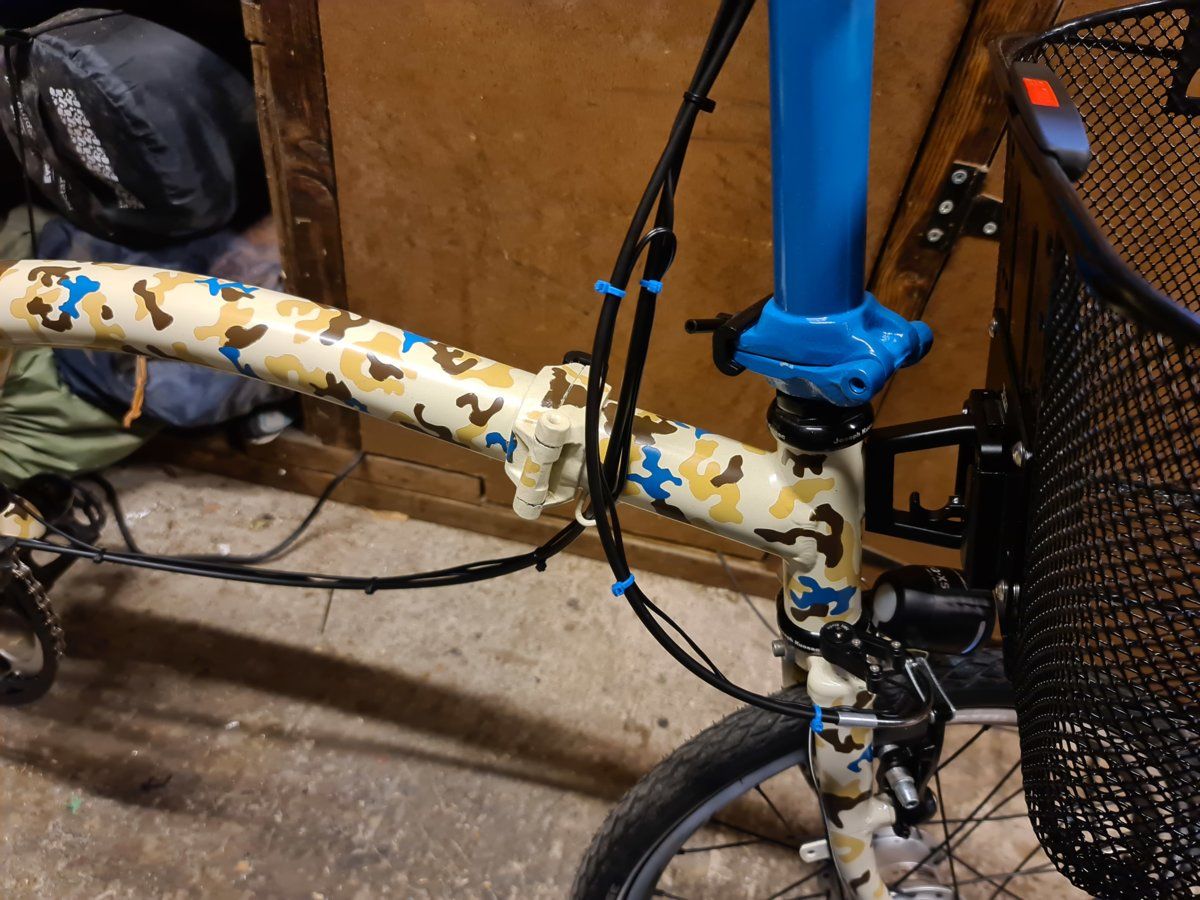 And after the obligatory spin test... 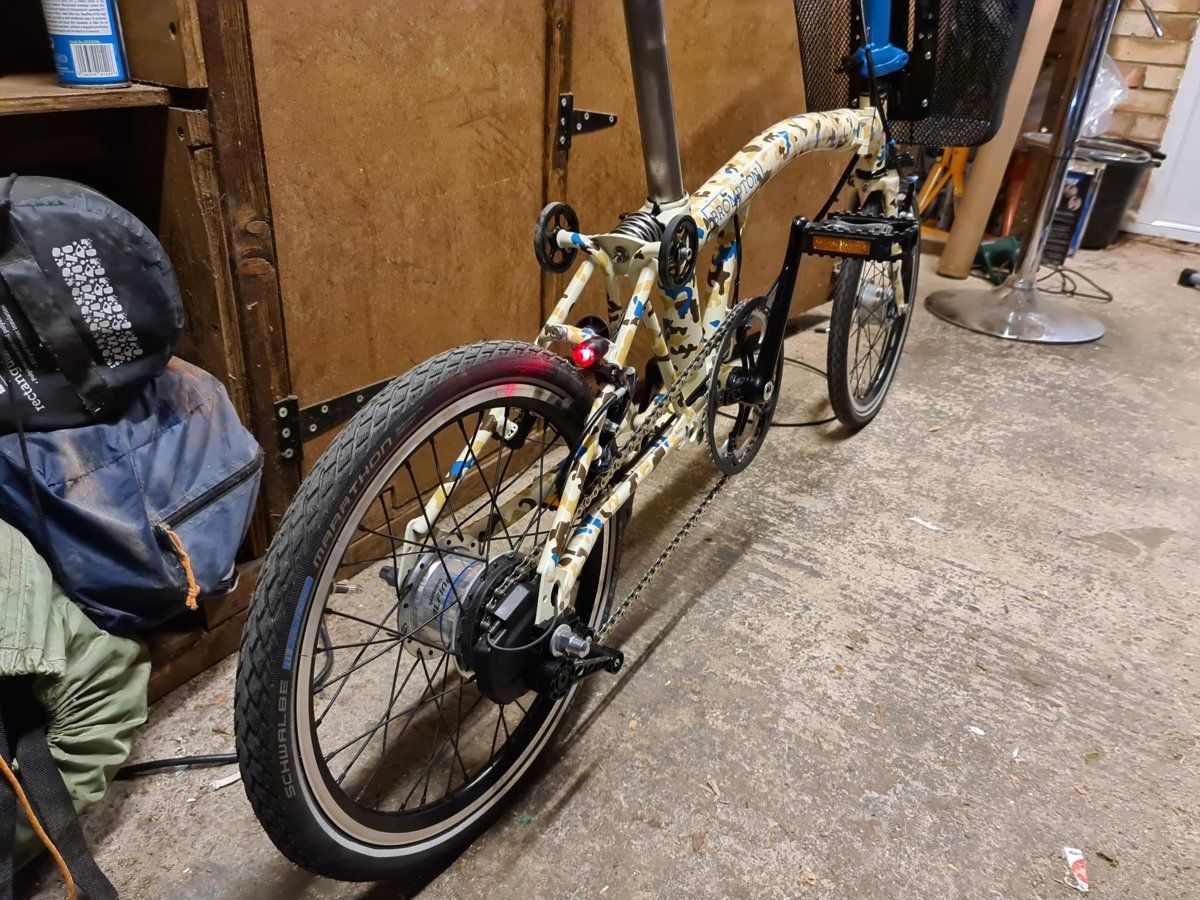 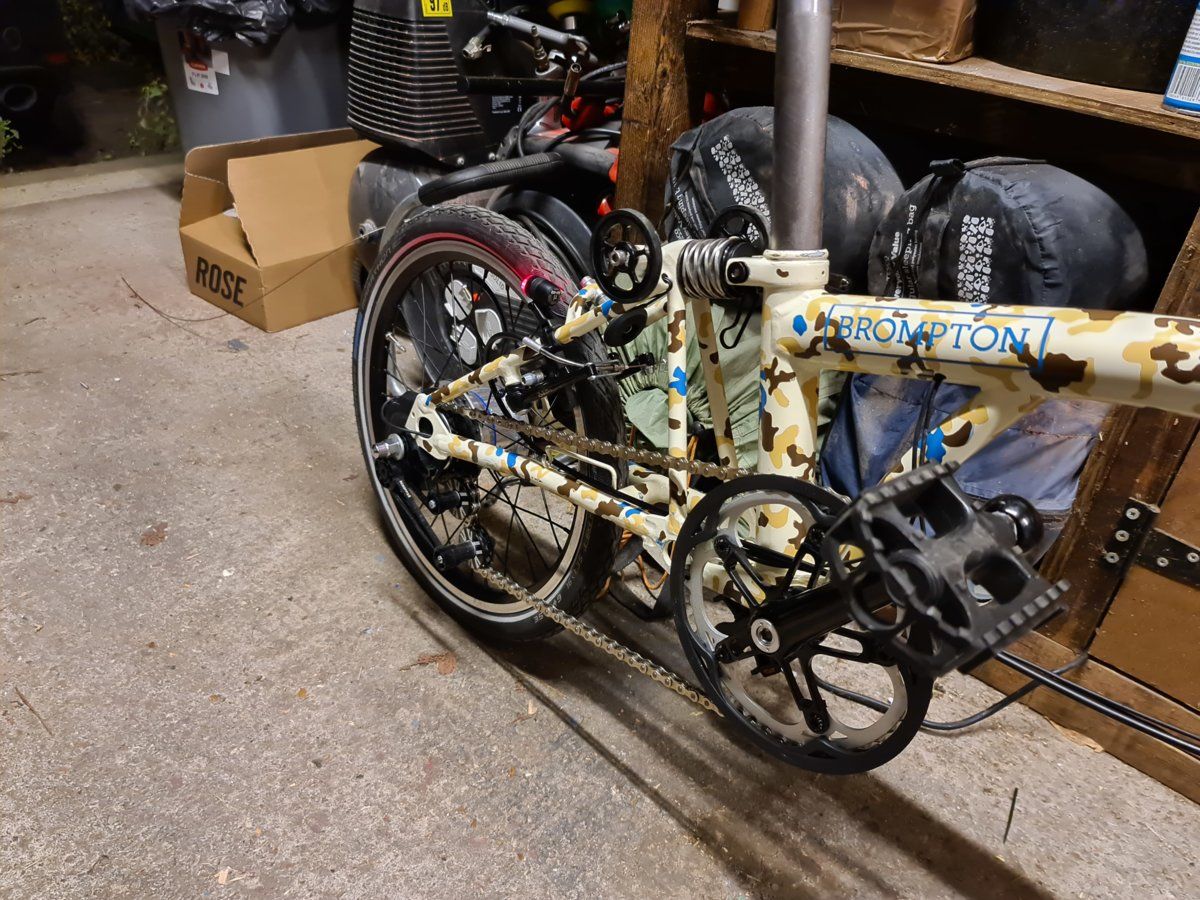 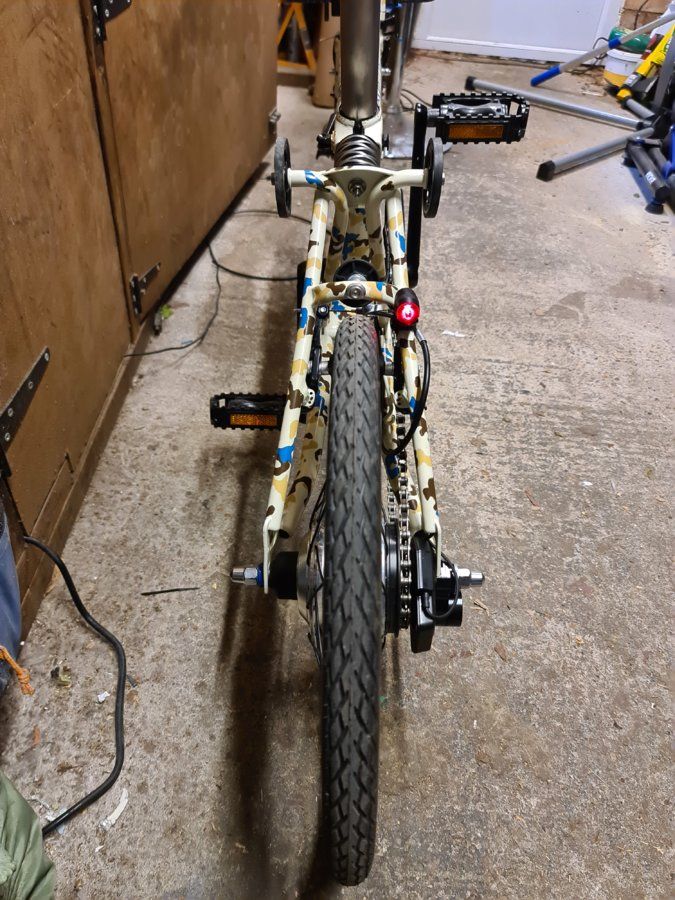 It's difficult to make out from the pictures, but it's a bright little bugger for its size

I think if I were planning to use it in anger at night I would take a second rear light, but this one is absolutely perfect for the bimbling about its likely to see 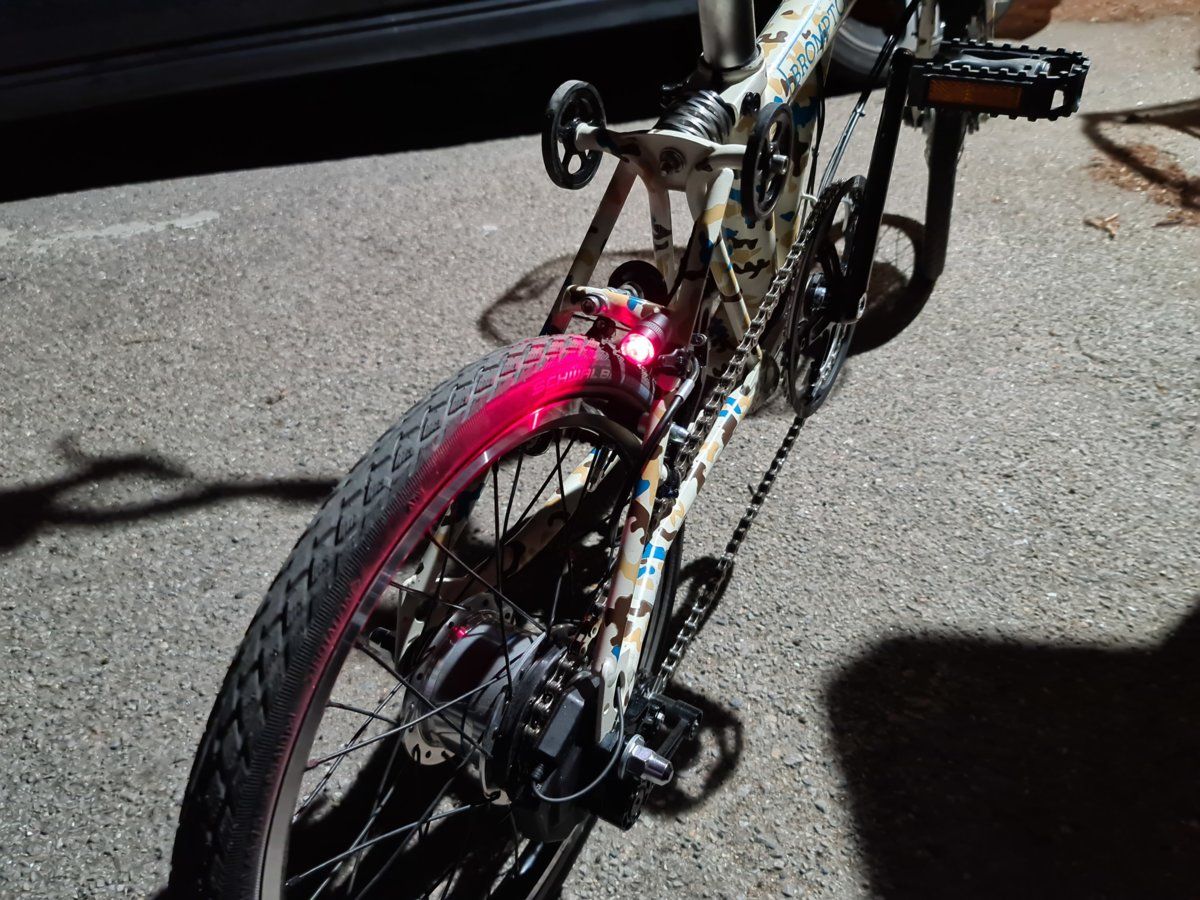 The poor little thing has been moved about a lot in the months I've owned it, but it finally seems to have found itself a spot in the garage to call it's own 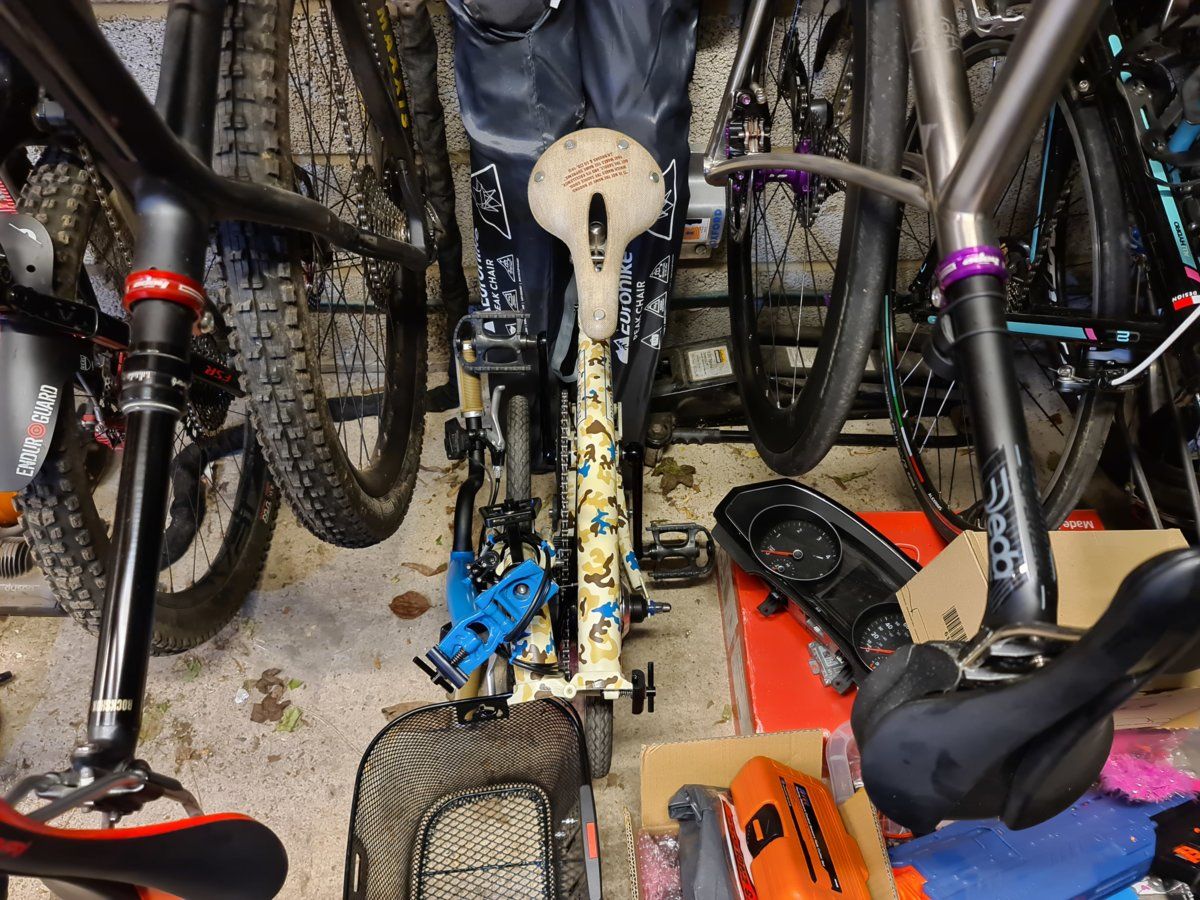 So, aside from a few very minor tweaks, I think it's now as I set out to achieve

I think I've finished a project

To say I'm pleased with the result would be a massive understatement, it's a fabulous little bike which I hope to put a few miles on now it's finished

I've decided not to put it up for sale, at least not in the short term. I think you're right @Gunk - I would regret selling it if I move it on now

There likely won't be any bicycle related projects for a while as I started digging big holes in the garden this afternoon for an extension, new driveway and some drainage work

As you ride your little beast I bet you will find it will become harder and harder to get rid of. Not how I have mine but your workmanship is very impressive. Well done!
C

It has been brilliant to watch a master craftsman at work, thanks for the detailed explanation and pictures.

This is pretty cool!

So my little Brompton is on its way to pastures new

I'm hoping to get some photos of it on the city streets, that would be very cool

I still have the basket I modified in the garage if anyone wants it.

JhnBssll said:
So my little Brompton is on its way to pastures new

I'm hoping to get some photos of it on the city streets, that would be very cool

I still have the basket I modified in the garage if anyone wants it.
Click to expand...

Probably like you John, it was nice little relationship whilst it lasted, but I’ve scratched that itch, I don’t think I need another in my life.
You must log in or register to reply here.
Similar threads