Can anyone see any issues with buying a 2012 Cannondale Synapse?

I'm still mulling over a road bike for springtime. I'm a big fan of buying last years model at a good discount generally but the bike that's caught my eye is the Cannondale Synapse Carbon 105 (2012). Seems a strong deal to me, even if it's only 10spd and not the very latest frameset.

Can anyone see anything that should be putting me off about the bike, 54cm should be right on the button for me 5'9" and I want something for longish, comfortable rides rather than flat out racing. The Planet X RT58/Pro Carbon are on my radar but I really like the idea of the Cannonade frameset and Mavic wheels.

Any thoughts?
OP
A 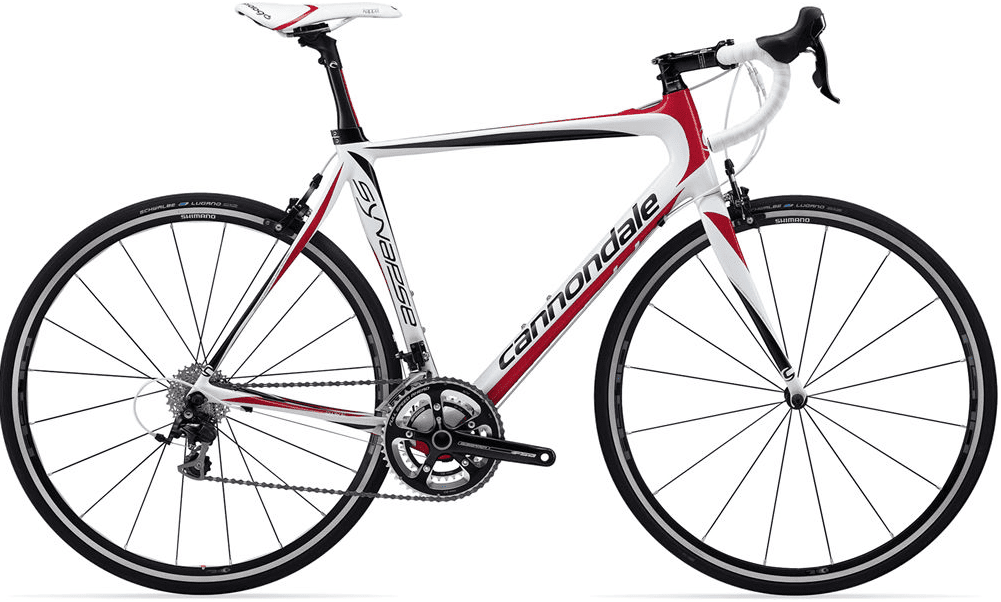 I've contacted the seller to check its the Mavic Aksium WTS wheelset not Shimano pictured, and they've confirmed it's the Mavics.

Sounds perfect, looks lovely, pauls cycles are reputable, I think @jamin100 got his giant from them

Lifetime warranty on cannondale for original owner I expect

Do check it's the right size though, maybe try one at evans or similar, you should know from sitting on it if the frame will work for you, even if adjustments needed

Yeh I got my defy 3 composite from Paul's cycles

No issues at all. Delivery was exactly when they said it would be and the bike was brand new in the box
I had to attach the front wheel, straighten the handle bars and then make my adjustments

They've probably only got one and now you've linked it on the forum, you may want to act quickly

Real bargain, good specs and I have yet to see one discounted to that level.

Looks a bargain but you do know they melt in the rain.

I very nearly bought an Alu/tiagra 2012 Synapse. Was just a little cheaper than that.

Buy it before I do

Growing Old is Compulsory...Growing Up is Optional

As Vickster suggested I would also recommend trying one out in a LBS for size. As for the 105 groupset i run both the 10 speed (5700 series) and the 11 speed (5800 series) versions (two different bikes) and can tell you there are some fairly bold improvements in the new 11 speed kit, the gear change is much smoother, which comes from the different pull ratios that have trickled down from Ultegra, and the 5800 series brakes have loads more stopping power than their 5700 series predecessors. Don't get me wrong, i'm not saying the 10 speed stuff is rubbish....it's not, it's decent kit and works well, but the 11 speed kit has significantly improved performance.

Putting all that to one side, that is still a great looking bike, nice spec and a fantastic price.

that bike was actually 1600quid rrp at the time it was out. i think.

still a good deal though. i really wanted one at the time.
U

Looks good , just double check the sizing as Cannondales come up big , a 54cm is good for me and I am 5 11 ,everyone I have spoke to says to go a size below on them than usual .
OP
A

Cyclist33 said:
that bike was actually 1600quid rrp at the time it was out. i think.

still a good deal though. i really wanted one at the time.
Click to expand...

You sure that wasn't tiagra and shimano wheels?

AAddict said:
You sure that wasn't tiagra and shimano wheels?

no it was the red white and black one with 105, i know because i really wanted one, and a bloke round here had one.

i would rather have shimano than mavic on the wheels but thats just me.
U

Cyclist33 said:
i would rather have shimano than mavic on the wheels but thats just me
Click to expand...