If you enjoyed Monday's Tour of Britain stage in the Forest of Bowland/Pendle district as much as I did, then you might be tempted to come along on my next forum ride which covers some of the same roads, albeit at a much less frenetic pace!

We will start at Spring Wood visitor centre above Whalley, and do an 80 km/50 mile clockwise loop taking in Longridge Fell, Beacon Fell, the Trough of Bowland and Waddington Fell from the north side. Cafe stop at Country Kitchen cafe in Waddington, then an easy ride back to Spring Wood. 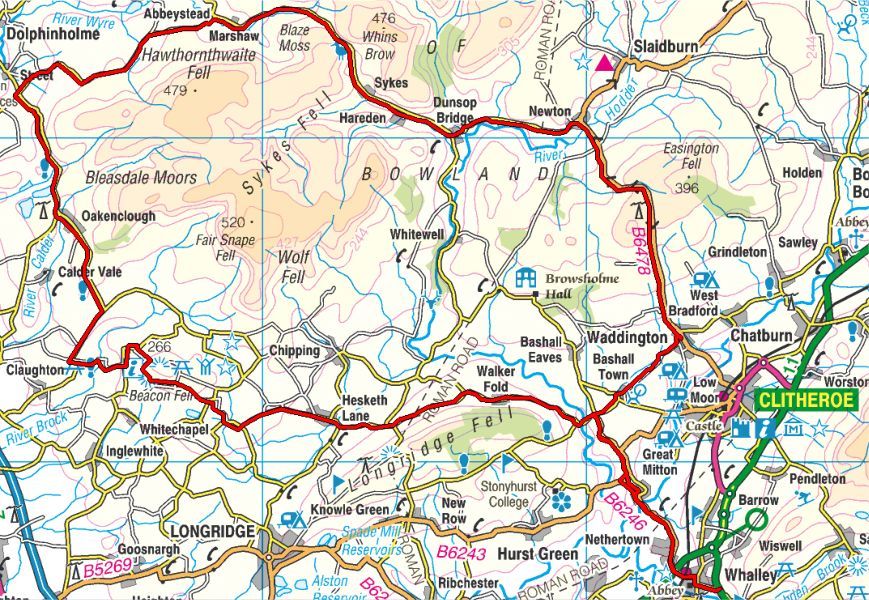 @Littgull has kindly offered to give me a lift. If he and I feel like it, we might add an optional 20 km second loop on at the end of this ride, taking in the Nick o'Pendle (the first KoM climb on Monday's stage), and Black Hill/Padiham Heights, returning to Spring Wood down the Old Roman Rd, which the pros road up on Monday. That second loop would bring the total distance for the day to a metric century - 100km/62 miles. I can't promise that we would do that second loop, and even if we did, we would drop anybody who did NOT want to do it back at the car park at Spring Wood first.

The terrain is quite tough, but we will only be riding at an average speed of around 16 kph/10 mph so I would guess that the ride will take about 5 hours on the bikes, with (say) a 45-60 minute relaxed cafe stop on top of that. We will start at 10:00, so we would get back to the car park by about 16:00. If we did the second loop, that would add about another 90 minutes of riding.

I will update the post with more details soon.

I'll join you for this one unless I have to be in Carlisle that weekend. (long story)

I'm away that weekend. I wanted to go and cover some of the bits of ToB stage 2 I watched but haven't ridden (or at least don't remember!) I did say 'oh I've ridden this bit the other way and turned off there' and 'this roads on the way out on Spring in the Dales' etc. etc. to SWMBO who to her credit feigned reasonable interest!
OP
OP

I have told 3 non-CycleChat riders about this ride, so there will be 0-3 extra participants, depending on what they decide.
H

rusty bearing said:
I'll join you for this one unless I have to be in Carlisle that weekend. (long story)
Click to expand...

Oh I am sorry,please accept my apologies in advance

Try not to be too disappointed,bring something with you to remind you of the 21st century

I found the previous post somewhat baffling until I finally spotted Hyslop's location!

Should have been in France let alone Carlisle. In short elderly relative had fallen and taken to hospital. Now having physio in Wigton. Making progress but we don't know when she will be discharged. Wife wants to be there to settle her back in etc etc.
Such is life........

Nowt wrong with Carlisle by the way ☺
OP
OP

rusty bearing said:
Should have been in France let alone Carlisle. In short elderly relative had fallen and taken to hospital. Now having physio in Wigton. Making progress but we don't know when she will be discharged. Wife wants to be there to settle her back in etc etc.
Such is life........
Click to expand...

If by some chance, she doesn't need family support that day, hopefully we will see you on this ride, and if we don't - on a later one! I will probably organise another the first weekend in October, and maybe one in early November if we don't get a premature winter! (I am probably jinxing myself by mentioning that a couple of my past November forum rides took place in wintry conditions!

Ta Colin. She's getting back to her old self. Still hoping to be on the ride
H

A forlorn thread bump disguised as a weather forecast ...

The outlook for Saturday is currently ok, though the weekend is still too far away to be confident in the accuracy of the forecast..

I am still waiting to hear if any of the non-CC riders I invited are going to come along with us.

If you are confident that you can manage the distance and the climbing, don't worry about your speed - we don't ride quickly on my forum rides! We will ride at a speed that we ALL feel comfortable with. Anybody who does want to push themselves can do so on the tougher climbs and we can regroup at the summits.

Would have really liked to have joined you on this one...But work commitments have put paid to any cycling apart from cycling to work this weekend.
Going to ride your route either Tomorrow or Wednesday as I'm not in work. Will choose the best weather day..
You must log in or register to reply here.