Great Weekend for the Cubes

Last weekend saw Cubester and I set off for a Rugby Tour. Now Huddersfield RUFC Mini/Junior Section Tour was going to pale into comparison with some tours I've been on, but there were some lovely moments

On Saturday we were talked into forming a Dads and Coaches team to play Towcester RUFC. We turned up, an untrained mix of players, old players, enthusiastic beginners and trotted onto the pitch to face a team that we were told was a scratch team, but who turned out to be a team that toured canada in the late 80s or early 90s. Average age 10years younger than us, and they could play. We were thrashed, and I can only just stand up straight now if I concentrate on looking straight ahead.

The boys made up for it all on Sunday. Cubester's U12 team played in the A team pool at Aylesbury, against some notable teams, Beaconsfield, Windsor, Buckingham and so on. Now our lot are pretty good, having reached the final of the Yorkshire Cup this year, but of course they were facing some of the best Home Counties Teams going. They won all six matches and only had 2 tries scored against them.

Best bit for me was the presentation by guest star Lawrence Dallaglio. Our boys have a tradition of giving the head, shoulders and back of the player of the week a "team rub". Lawrence gamely posed for photos with our lads before a voice in the crowd shouted "Team Rub for Lawrence. "

Look at the wasp Mascot in the second photo- he thought it was funny as Lawrence tried diving into the tent to stop the rubbing!!!!: 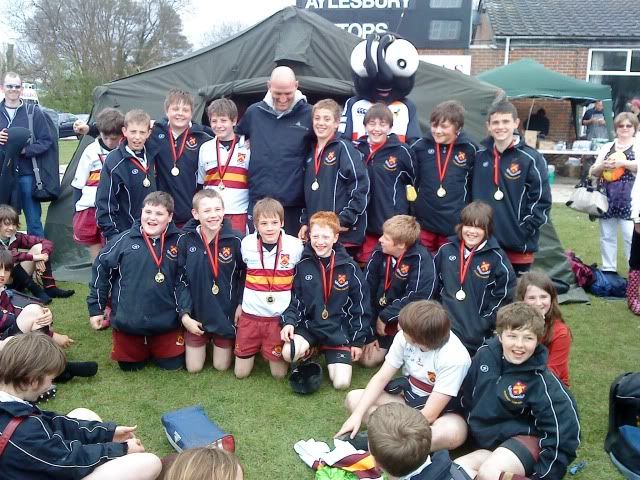 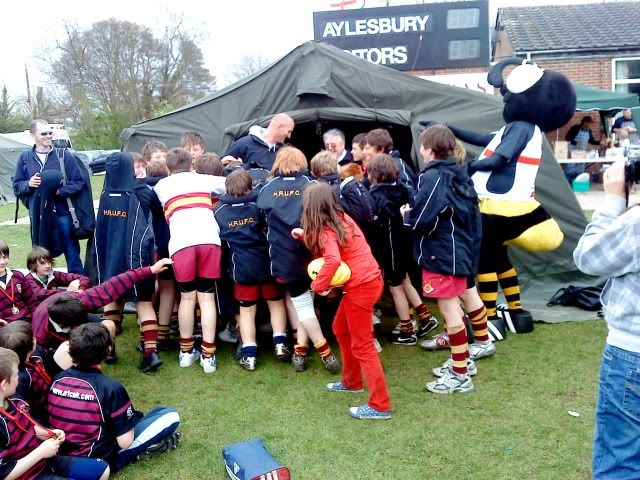 Great obituary in the Telegraph.