Hi everyone! Can anyone help with any information about this bike.Its a BSA beaver with white Raleigh wheels 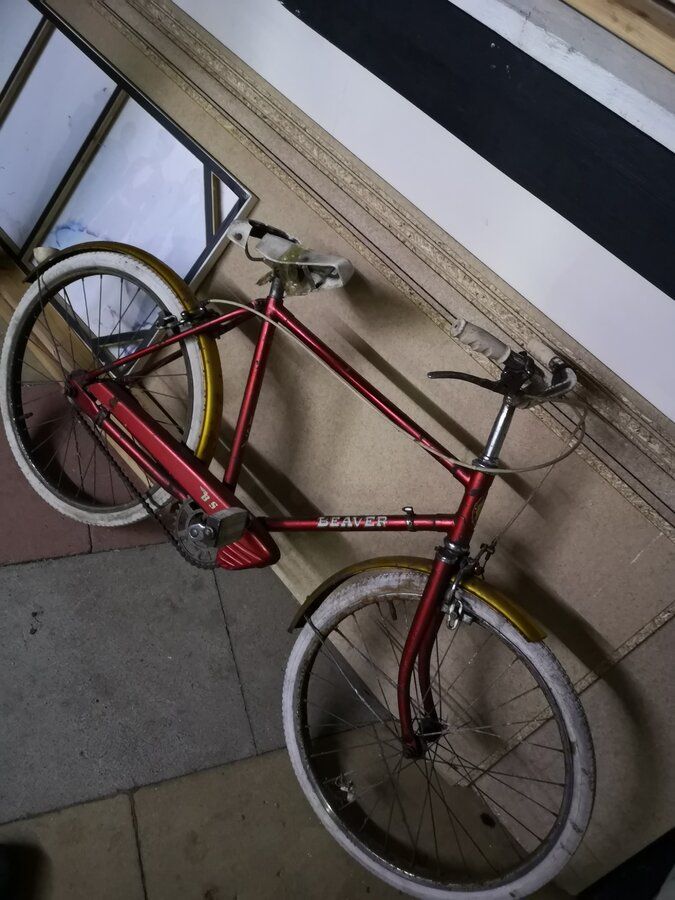 Raleigh acquired the BSA bicycle manufacturing facilities in the late 50's, and to some degree from that point on they were little more than rebadged Raleigh's. Therefore, having Raleigh branded componentry is common, and the later the machine the more it is likely to have.

My gut call on this one is circa mid 60's to mid 70's, more likely the later part of that date range jusdging by the cable routing, so not terribly old. If you're interested in the age then the rear hub is liable to have a date code, as are some other components. Is there a frame number visible anywhere?

The frame construction, particularly the cast lugs and rear triangle arrangement, mark it as a fairly low end machine, so even in its day it was likely an inexpendive machine.

Unlikely to be valuable, but on the plus side it looks like it wouldnt take a lot to make it into a rideable machine with plenty of life left in it.
Last edited: 26 Apr 2021
E

I suspect there's something seriously wrong with it if it won't even roll down a hill that steep.

I’d guess it’s more sixties than seventies. As Drago says it would have a date stamped on the Sturmey Archer hub but it doesn’t appear to have one. Its been styled after an American cruiser bike but they would never to have been able to market it there due to the connotations with the name

Agree. Personally, I'd be inclined to lose the steel rims. And that's from personal experience of many years of trying to stop in the wet before alloy rims were generally available - !

True, but not too much rain on the Californian beaches. Those wheels look to be 26” so a set of mountain bike wheels should suit albeit not period correct.
No white tyres but I found these white wall tyres:
https://classic-cycle.com/wheel-and...g-balloon-tire-24-x-2.125-54-x-507-white-wall
Last edited: 26 Apr 2021

is it a children's bike?

midlife said:
is it a children's bike?
Click to expand...

The Raleigh Muff and Philips Flange were basically the same bike but with different paint an decals.

Drago said:
The Raleigh Muff and Philips Flange were basically the same bike but with different paint an decals.
Click to expand...

But the Giant Gash didn't sell so well...
A

I'm pretty sure this is the bike I had as a 10 year old, albeit in metallic blue. I knew it was a BSA but not the model. It was second hand when I got it and the decals worn off so I don't recall the 'Beaver' bit. I don't think it will be worth much though as even then it was considered a very poor relation to the Raleigh Chopper etc.

When I was 10 it was officially the fastest bike in the world though, if that information helps at all.

A Raleigh Chopper and a BSA Beaver...what a pair to have in your fleet.

That's definitely a kid's bike, and I'd hazard a guess that the wheels are much smaller than 24". Looks to be a similar size, geometry and vintage to my Hercules, albeit the latter has rod brakes and the seat stays are decidedly chunkier.

Am I allowed to say I was admiring your beaver ?