Fortunately (for me) I wasn't on a bike. I was driving the truck back from Hemel Hempstead. Just got past Eynsham - obeying my 40mph speed limit, incidentally - when a deer ran out into the road about twenty yards ahead of me on a course which brought it squarely into contact with the driver's side step ahead of the front wheel. I had time to hit the brakes but not much else. It damaged the truck quite badly, but not as badly as it damaged itself ... I wish I'd picked it up now and brought it home to cook.

The biggest thing i have ever hit is a phesant, stupid birds. But glad your ok, i have heard people hitting venision and coming off worse. ie the beast walks away and your car is a write off

I am in West Oxfordshire not far from Eynsham. We have plenty of deer in this area, I hit one whilst cycling to work one morning

Fortunately it was a glancing blow, my front wheel against the deer's backside. I had a serious wobble but stayed upright, and the deer ran off.

Rhythm Thief said:
Fortunately (for me) I wasn't on a bike....
Click to expand...

I was working with my ex's father a few years back on the Ashdown Forext when a woman hit a stag she shattered its front leg. We put the poor blighter out its misery and took it home to be butchered.

Had Venison for about 6 months!!

I undertook a crow the other day, by this I mean I cycled underneath it as it flew along in front of me just above my head, I thought it was going to land on my helmet for a second!
This was while going down College rd in Dulwich.

Rhythm Thief said:
I wish I'd picked it up now and brought it home to cook.
Click to expand...

I think there is a old rule that you are not allow to pick up road kill and cook it if you the person who hits it. But if you were the person going pasted at the time you would be able too.
C

When I lived in the Highlands I knew two or three people who'd written their car off hitting deer. I came close one day, driving home in the twilight I saw something moving fast in the corner of my eye and hit the brakes hard. A deer leapt the fence to my right, landed in front of the car and sailed over a huge fence and ditch to my left. It took a few minutes to for us all to recover from the shock of a true emergency stop, luckily there was no one behind us as one of the people who wrote his car off did the same thing and was hit behind by a van.

There have been plenty of accidents in the USA with deer and moose hitting cars. It's an increasing risk in the UK with the growth in deer numbers. 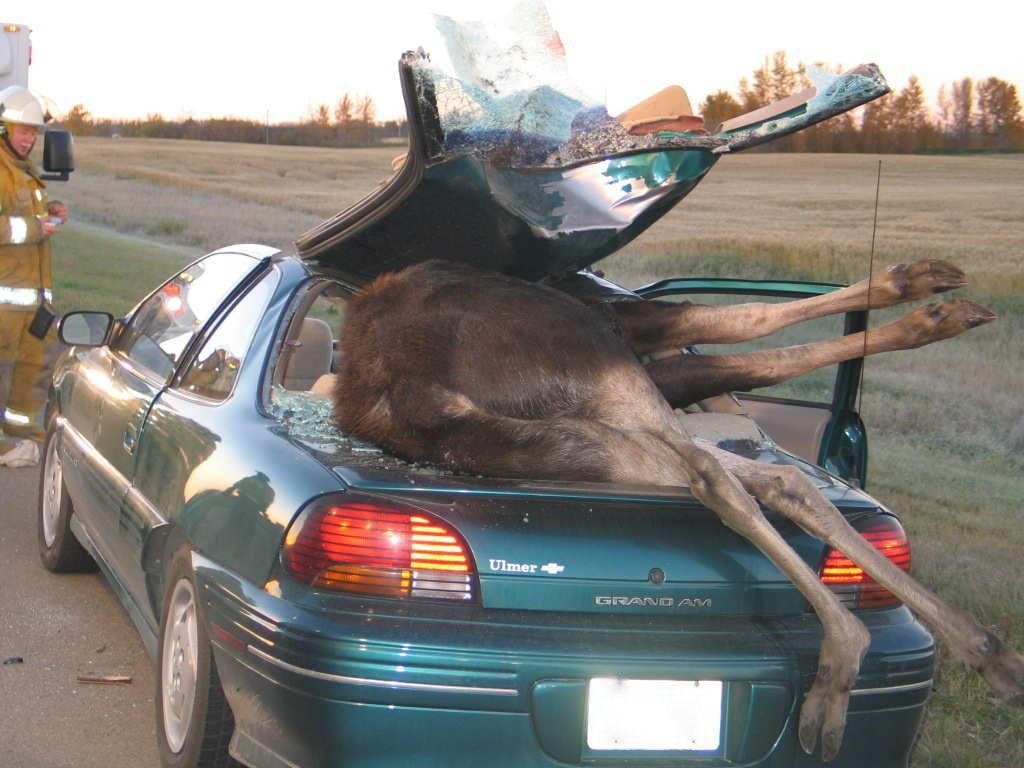 Helly79 said:
I think there is a old rule that you are not allow to pick up road kill and cook it if you the person who hits it. But if you were the person going pasted at the time you would be able too.
Click to expand...

'tis true. If you kill it and take it home, whether using dogs, guns, a fixie or an Actros tractor unit, it is poaching.


Globalti said:
There have been plenty of accidents in the USA with deer and moose hitting cars. It's an increasing risk in the UK with the growth in deer numbers.
Click to expand...

Was discussing this one yesterday. We had two fairly large herd who visited our farm, at least 20 head of deer in both. Sadly, I think the pikeys have been at them as yesterday was the first time I've seen any in months and that was just a solitary female.

I wonder why animals run out in front of vehicles?! One would imagine that their instincts would tell them to avoid anything large, loud and fast-moving!
OP
OP

User3143 said:
Lucky you - I still work in Hemel, where you had been delivering to? Tell me to mind my own business if you want.
Click to expand...

Xerox, out near the fuel depot. Every night. I'm getting bored with the journey now ...

Rhythm Thief said:
Fortunately (for me) I wasn't on a bike.
Click to expand...

That was about the first thing I thought. It'd have disintegrated.

Deer. If they are wild, then anyone can pick up the carcase even if you have run it over UNLESS it has run from a deer farm or a Crown Estate. Wild animals belong to no-one until rendered into possession by killing them.

Deer are NOT classed as Game under the Game laws.

Wild game (Partridge, pheasant, grouse etc) does not belong to anyone, so if you find it on the road you can keep it, according to the game laws. You cannot sell it ten days after the start of close season however.

Rabbits are not game. They are wild, do not belong to anyone, and so you can pick them up and keep them. They only become ground game for the purposes of certain land issues, none of those are relevant to roadkill. On a road they are simply wild animals.

Now for the difficult bit.

The Wildlife and Countryside Act makes it all a bit more complicated. It is an offence under that act to be in possession of any wild bird except for a game bird, and then only in the close season for that game bird. So, if you decide to pick up a dead pheasant form the side of the road you CAN , but only between October 1st and February 1st.

There is also an enormous schedule of wild animals that you may not have in your possession, or any part of,or any derivative, dead or alive. The exceptions are similar to the ones above re game, for species of deer outside of their closed seasons, so you need to know when they are.....


I'll stop now as my brain is addled. It all gets very convoluted, but I think the Highways Agency eventually decided as they have the responsibility to clear the roadkill off the road, it actually belongs to them. Anyone who can research all the various bits of game laws, common law, the theft act, and bring it all together given the vagueries of the Wildlife and Countryside Act to create anything approaching a rule of thumb, should be knighted or decorated or whatever.

In the meantime, nowhere in any of the legislation is there anything to say which driver can stop and pick it up. That is a pub-barrister's red herring, a rural myth (as opposed to an urban one....somehow urban roadkill doesn't have the same appeal!) As most of the game laws were tidied up and conglomerated in the 1800's I somehow doubt if the lawmakers were thinking about killing game with cars!

So. Can you pick up roadkill? Yes, but then again it all depends.....

Can anyone remember reading any local court reports or local paper headlines about people being prosecuted for picking up and eating roadkill? No, didn't think so! SO the likelihood of prosecution is minimal.

If you were faced with a tasty morsel on the tarmac would you take it home and feed it to your family or fledglings?
B

My very pregnant friend had a lucky escape driving home along a narrow country lane when a large deer sailed over the top of the hedge landed on her roof and bounced off over the opposite hedge! She had to have the roof repaired and was very shocked. I was driving to work and a pheasant came over the hedge with not enough height and collided with my windscreen which shattered so I dread to think the damage a deer would cause.

I would warn you that gutting and butchering a deer is not a pleasant task, they seem to store huge amounts of faeces which you invariable find while doing the job.
You must log in or register to reply here.