I bought a SWB bent in November and have since covered about 300 miles.(A 2006 TW Bents Amigo - looks like a Nazca Fuego).

Initially I was worried about close passes from trucks and cars on the country lanes in South Cheshire and North Shropshire that I ride regularly. However, I was reassured by others on this forum who believe that the uncommon appearance of a 'bent in a car or truck windscreen encourages those drivers to slow down more than they would for a DF bike, and give the 'bent a wider berth. To date I've not felt threatened by a motor vehicle on the local lanes, despite some very narrow roads around here. In fact I wish some of them would pass more quickly as keeping a 'bent on a straight path with a truck slowly creeping alongside is far more difficult than on my Defy.

But not so the horses.

We may have as many horses in this area as people - so I encounter a horse or 2 on most rides - and maybe 50% of them seem to be spooked by a 'bent. Once they appear around a hawthorn hedge-hidden corner I switch off my flashing front light, slow right down and call out to the rider if it's OK to proceed. Sometimes I stop to wait for them to pass, sometimes I carry on slowly, but talking to the rider so that the horse knows that whatever it is on the road ahead has a human being associated with it, and the rider knows what my intentions as a fellow road user are.

But, sometimes, no matter how much care I approach with, some horses are spooked - and that is way more scary than being passed by a horse box on a narrow road. You have no idea if the spooked horse, with ears pricked or laid back, whites of the eyes showing, and a clearly nervous rider, is about to launch itself into a frenzy and challenge you for occupancy of your seat. A car is only marginally higher than me on the road, a horse is way taller, dangerous at both ends, and much less predictable.

Not sure there's much more I or the riders can do, and invariably they thank me for my consideration - but I approach every horse I meet on our narrow lanes as an incident waiting to happen. I rarely have the same problem with my DF bike - horses seem far more used to them.

Does anyone else have the same problem?
Last edited: 17 Jan 2015

My wife has horses & it appears they do always spook at bents. I don't think there's anything more you can do, you are doing everything you can, but because horses don't see many bents, they never seem to get used to them & will normally spook.
i'd just give them as much room as possible so that they can't kick out at you

If the horses come from a local stable you could maybe take the bent there and let the horses inspect it at their leisure.
To them just now it's something they haven't seen on the road before and they will be worried about that.
Seems you are already doing what you can and I'm sure the riders appreciate your consideration and thoughtfulness.

Not had it as a 'problem' but I know exactly what you mean.

I've had a couple of interesting encounters with horses, both very amicable and informative for me.

First one, I was approaching a horse and rider with a lady leading the horse, quiet village road. I saw the horse begin to twitch when I was about 100m behind them, so slowed down and called out, informing them that I was there and asking if it was safe to proceed. The lady leading the horse called me through and said that the horse could hear me but not see me - which was surprising, as I was a long way back.

She told me that horses have very acute hearing but need to be able to see to be re-assured.

and a horse and rider were coming down. I slowed down (ahem) and gently fell off and lay (as gracefully as I could

) at the side of the road and the lady rider told me that it was my flag flapping which was unsettling the horse. I restrained the flag and they passed safely for all.

So flags and very acute hearing but not seeing are twitch points for horses around here !

As has been said, you seem to be doing everything right - they just need to get used to seeing you !

I was also thinking about going to the stables to let them see you and the 'bent.

I have horses and bents.

I had a horse that could jump a 5 bar gate. But sometimes couldnt walk past a crisp packet, a leaf or some other mundane thing without getting worked up. They are odd creatures.

You are doing all you can at the moment. Even if you get off the Bent, they wont like it. But dont worry about the riders, they will be used to the horse throwing a tantrum occasionally. Its part of the fun being on a horse.

Keep slowing down and talking.
T

As a horseowner I agree you're doing all you can. I would appreciate you keeping talking and I would talk back to you as my horse is usually reassured if I speak to anything she is worried about........strange creatures. I don't think you are in danger, the horse is a flight animal and its instinct is to flee from what it fears, it will usually only kick if cornered.
U


Predatory animals evolved to be low sleek and fast, as this gives them the edge


Now look at your recumbent .... it is low, sleek (and depending upon the rider) fast

Cunobelin said:
It is simple....
Horses are "prey" animals and all their reactions are based upon this outlook on life
Predatory animals evolved to be low sleek and fast, as this gives them the edge
Now look at your recumbent .... it is low, sleek (and depending upon the rider) fast
For this reason horses will always see recumbents as a threat and act according to their prey status
Click to expand...

Very good way of looking at it, not thought of it like that

Cunobelin said:
It is simple....


Predatory animals evolved to be low sleek and fast, as this gives them the edge


Now look at your recumbent .... it is low, sleek (and depending upon the rider) fast

For this reason horses will always see recumbents as a threat and act according to their prey status
Click to expand...

I have spent years developing an "aerobelly"

Where I used to ride, way back in the late 80s, I used to see Mike Burrows most days on a 'bent. My horses all used to dance the fandango when they saw him. I think that it was mostly the flag noise that they didn't like. He used to say - while I was battling not to be carted off up the road - "They'll get used to them". Most of them bloomin' didn't.

Give horses extra room and maybe even a cheerful call out to the rider before passing. Once you are level with those lethal rear hooves, maybe get a bit of a wiggle one, especially if the rider is struggling and the horse is dancing about. I know that I appreciated a swift pass after being made aware that Mike was closing in on us.

andytheflyer said:
Does anyone else have the same problem?
Click to expand...

I stop, get off and stand up, and talk to the rider.
OP

Thanks for the responses - it's obviously not just me that spooks horses!

I started out with a flag, but once I realised that traffic gives me a wide berth anyway, I gave it up as it was clearly a potential factor in disturbing the horses.

Getting off and standing up is more of a problem for me - I have spinal cord damage in my neck which reduces my mobility, so getting on and off any bike becomes an exercise in planning, preparation and precise but slow execution - I can't just hop off! But I suspect if I was about to be flattened by half a tonne of horse I'd find a way of moving sharpish!
Last edited: 18 Jan 2015
U

andytheflyer said:
Thanks for the responses - it's obviously not just me that spooks horses!

I started out with a flag, but once I realised that traffic gives me a wide berth anyway, I gave it up as it was clearly a potential factor in disturbing the horses.

Getting off and standing up is more of a problem for me - I have spinal chord damage in my neck which reduces my mobility, so getting on and off any bike becomes an exercise in planning, preparation and precise but slow execution - I can't just hop off! But I suspect if I was about to be flattened by half a tonne of horse I'd find a way of moving sharpish!
Click to expand...


My wife has similar issues standing, so we equipped the trike with standing aids.

They make a massive difference 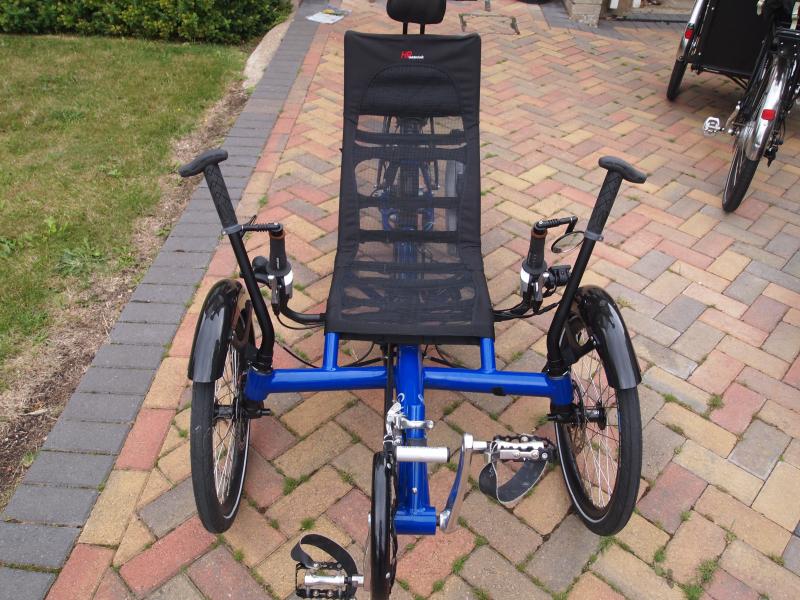 I'm in Suffolk, and I passed a horse I'd say 30 to 40 percent of my rides. This number increases exponentially if I head toward Newmarket. I've learned to take it as it comes. I built my bike so while I was building it this is an issue I became aware of. I started riding Feb 2014 and sure enough horses not care for recumbents in general. I never can tell until I get within 40ft or so unless I do a hard gear shift. You find out real quick if they're settled or not. As a general rule I stop for all horse or creep far enough behind as to not unsettle them until the rider lets me by. Talking helps apparently, like you said it does help the horse to associate you with something human and not something completely unknown.

I have made one observation, the big fancy racing horses around here are more skidish than the farm/working horses. Sorry if the discription isn't great but I don't know a great deal about horses. Except I know I don't want to be kicked or trampled so I'll stick to pulling back or over.
You must log in or register to reply here.
Similar threads