How to be a BMW driver

I don't know if any of you follow Car Throttle on YouTube but he can be quite entertaining. I'm sure many of you can recognise these BMW driver traits;

So bad it's good. And possibly true!

I do have to declare, however, that I am a Mercedes driver. This may degrade my opinion significantly!

It's very true. Only yesterday a fat black BMW filled my mirror then dodged into lane 1 to try to undertake me and nip into the gap in front of me. Luckily I was wise to his ways and closed the gap so that he had to brake hard to avoid going up the chuff of the economy hatch in front of him. And then... oh joy...! the driver behind me closed the gap meaning cock boy was left fuming further back than when he had started his ill-judged move.

I'm not normally an aggressive driver but BMW drivers get right up my nose.
B

Globalti said:
BMW drivers get right up my nose.
Click to expand...

At the same time as up your chuff? 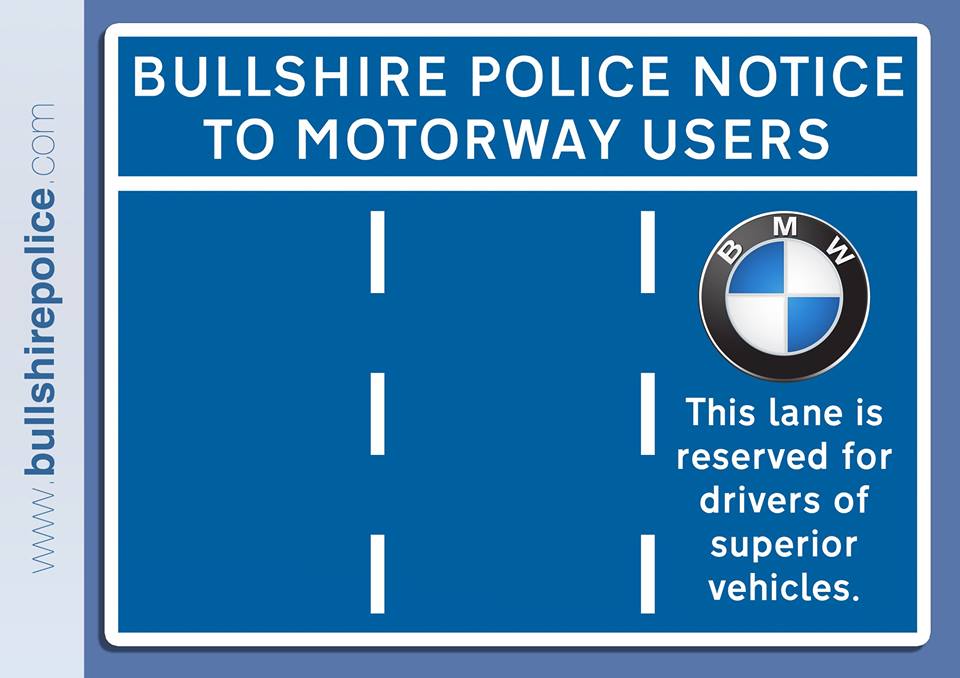 My classic manoeuvre was whilst driving a loaded 17 seater minibus (Ford), with a trailer on the back, in convoy with two others in Belgium.

Approaching a motorway to join via the slip road, we are slowly building up to maximum speed of 57mph, when a Beemer driver, seeing the potential 5 second delay our convoy could cause him decides to cut up the inside using the hard shoulder.

The Beemer drivers second mistake was he realised too late that we are in right had drive vehicles, on the right side of the road, so no one is going to cut up the inside of us without being spotted!

The front van/trailer straddles the hard shoulder, the middle van/trailer moves along side and the rear van also straddles the hard shoulder
We then reduce speed to around 45mph
Three vans of teenage Scouts think this is hilarious as we majestically sweep onto the crowded motorway to join in the the convoy of trucks all travelling at 57mph who spot what we have caught and close ranks.

When we had the Discovery, the kids used to prefer sitting in the side facing rear seats, if any BMW driver (or Audi driver too) was tailgating, they would stare at the idiot, was great fun seeing a grown adult squirm all embarrassed till they got the hint.

If somebody drives too close behind me nowadays I hold the windscreen washer lever and they get a good dousing, which often makes them back off.

When we owned a proper square Land Rover with a naturally-aspirated 1986 technology engine you could declutch and floor the throttle to rev the nuts off the engine and a huge cloud of filthy black smoke would blast out, which usually got people to back off.

All these things that BMW drivers get accused of, do you guys not see drivers of others cars doing this?

For example I've seen numerous other brands.of car tailgating.
Ditto for illegal parking and many other infractions.

But seems more often than not it's the BMWs that get noticed and then BMW bashing begins.

How about little Ford's or Vauxhall's like those Corsa or Astra Coupes. I saw a Renault Mégane Coupe the other day. Yesterday I saw an overturned Audi though. Nearby I see a Jeep illegally parked quite often but I see many brands of car parked illegally and driving over the speed limit and drivers on the phone.
You must log in or register to reply here.
Similar threads