I am looking to buy a ladies hybrid in the region of £300 - £400. I want the sit up and beg type and am interested in the Pendleton Somerby. Does anyone have any thoughts about this (I am worried I am being seduced by name and pretty colours!) I am wondering whether I should be looking for something that remains light but with more gears. I will be riding my 3 sons to school (with one of them on a tag-a-long) but also will be riding on cycle paths at weekends! Any suggestions welcome! Thank you.

The Pendletons seem to be decent bikes. Can I also suggest Dawes (link) who do a nice range of classic style bikes in that price range.

Nothing wrong with the Pendleton.

Having said that, It has seven cogs at the back which means it has a free wheel hub which are not so reliable as eight cog bikes which have what's called a free hub.

This could be a consideration for you because you want to do some towing.

More cogs at the front will give you extra gears.

The Ridgeback in the first link has 21 gears - 3X7 - so it will have the less reliable hub at the back.

The Scott is the dearer bike, which proves what you already know - you get what you pay for.

It's only sold by Halfords, which makes it an "avoid" for me straight from the start - possibly unless you know your local store is good at bikes. I'd also prefer internal hub gears on that sort of bike, so you'd need to do less maintenance (the chain can be put away in a case and isn't dangling around near all the muck that gets splashed up). I'm a bit biased because I've got bikes with 1x6 and 3x7 derailleur gears and a 3-speed hub gear bike and I enjoy the hub gear bike most (when all else is equal which it rarely is).

I wouldn't worry too much about the number of gears - I feel that's less important than the range of the gears. 21 and 24 speed bikes (3x7 and 3x8) typically have a gear range of 300% or more, which will cope with most things. But a 7 or 8 speed hub gear will still give about 250% range - it's just that the steps between gears will be larger. If you're not racing-ish, that's probably not going to matter too much IMO.

I think a sit-up/town/roadster bike should be great for riding to school with children and around on cycle paths - they're no slouches if you want to ride on roads, either. The obvious choice would be a Pashley Princess, but they're expensive, beyond your budget at £600+ and Pashley are often criticised for high prices. Lower-priced possibilities look like the Decathlon Elops 740 http://www.decathlon.co.uk/elops-740-dutch-style-city-bike-id_8303290.html or the Gazelle Classic which is on http://www.cycle-heaven.co.uk/bikes/brands/gazelle/gazelle-classic-3-speed-women-s-2015/ and the very graphical http://www.eastcoastbicycles.co.uk/Cycles.html somewhere. Both include some other possibilities including Dawes and Bobbin... I'm not sure about the Gazelle Classic for towing, actually. Towing probably wants a lower gear than most 3 speeds will have and then you'd need to lower the gearing - or more likely, get the shop to. Maybe a 5, 7 or 8 speed is a better bet.

Anyway, good luck and I hope you find something to ride that you love!

I've had a happy year with my Claudbutler Explorer 300 (2013 version with disc brakes), they do a very nice range of hybrid/city bikes for both men and women.
http://claudbutler.co.uk/bike/search?category=6

I have a Dawes hybrid and I really like it - now!
I'm a mountain bike rider and it's taken me a while to get it set up so it's comfortable for me, but I've ridden mountain bikes for a very long time!

It's a whisper quiet bike, with smooth gears (21) which is enough for me. 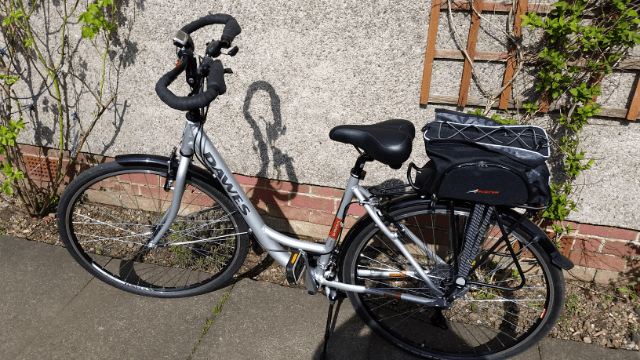 Boardman Comp Hybrid (again, Halfords only) gets great reviews (although £500), I'm looking at the team hybrid atm and umming and ahing because it's put together at Halfords...
You must log in or register to reply here.
Similar threads