I found an abandoned bike today..

Found this abandoned bike, by the river, on today's ride today.
Well, I think its been abandoned.... 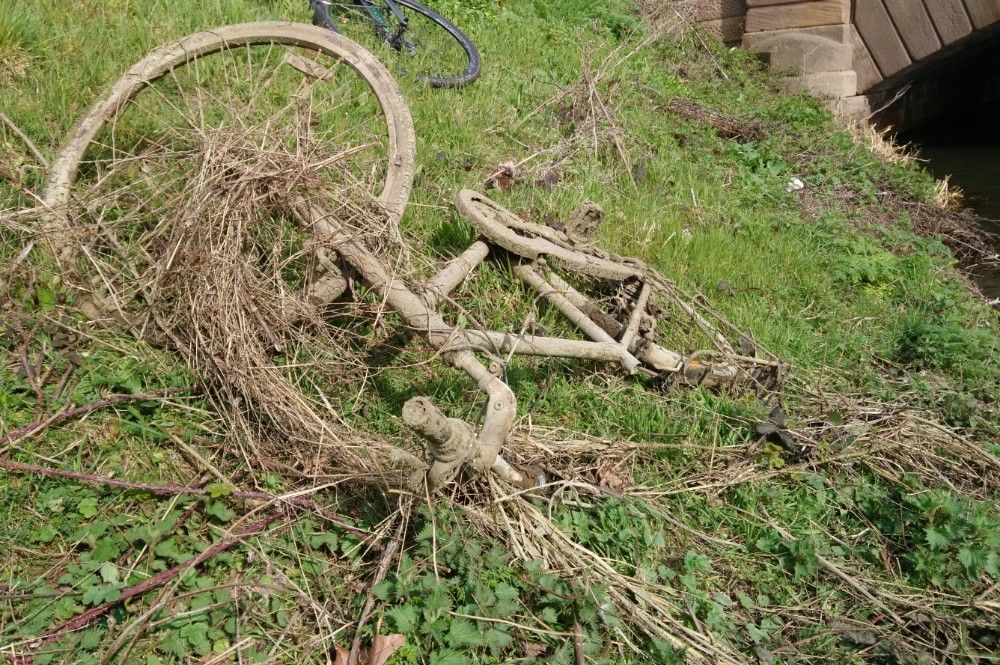 Not sure if it's worth saving, or not.

PeteXXX said:
Found this abandoned bike, by the river, on today's ride today.
Well, I think its been abandoned....

Not sure if it's worth saving, or not.

Might be some parts useable but tough shout , should have blown the tyres up and tried it then decided

A quick wipe with a oily rag should do the trick.

biggs682 said:
Might be some parts useable but tough shout , should have blown the tyres up and tried it then decided

If I'd have had a shraeder pump, I might have tried, but I only had Presta capability!

Puts me in mind of the old Enoch and Eli black Country joke (said in a thick black Country accent);
'I went fishing in the cut today'
'Did ye catch anything ?'
'Yeah, I caught a whale'
'How d'ye know it was a whale?'
'Cause it had spokes in it'.

I'll get me coat.

Did you not think to check if the rider was ok?

I like Skol said:
Did you not think to check if the rider was ok?
Click to expand...

I did that a few weeks ago, bike laying on the verge on a country lane, looked undamaged but I did a look round the area in case there was an injured rider nearby, there wasn't so I went on my way.

The one behind looks in better condition, have that instead!!

Was it a
Punctured Bicycle
On A Hillside, Desolate

Clean it up,a bit of oil as suggested and you will be fine for the Reivers Route. The Reivers Route is a 173-mile coast-to-coast cycle route from Tynemouth to Whitehaven through unspoilt Northumberland and the Kielder Forest. The route takes in Carlisle and the Lake District and provides a great alternative or returnroute for the Sea to Sea (C2C) Route.

I'll get me coat.
OP

I like Skol said:
Did you not think to check if the rider was ok?
Click to expand...

I did think, yes, but saw no bubbles on the river surface..

I see loads of similar on the Leeds Liverpool Canal usually by bridges, I don't know if its the magnet fishermen who pull them out or the Canal Trust, none of them have caused me to stop and examine them but there is sure to be some useful bits to salvage if you can be bothered.

Go for it - it is almost as good as the bike that @Globalti found...

Chain looks a bit slack, but apart from that it looks fine.

The bike I found in 2009 was an almost brand new Specialized Roubaix 2006 model, hardly ridden and with the moulding whiskers still on the tyres but a bent rear wheel rim. It was a bit like adopting a lost cat or dog, you wished it could talk so it could tell you what had been happening to it and how it had ended up thrown off a bridge into a river.

When I was 14 my buddy Andy and I fished an old delivery bike out of the river in Thame, Oxfordshire, looking exactly like the bike pictured above. We hacksawed off the basket, which was built as part of the frame, got a hole in the chainstay made by a rubbing crank brazed up by the village blacksmith, fitted ape-hanger bars, a home-made chopper seat, a huge chrome headlight running off a bottle dynamo, a rear wheel with a Sturmey Archer hub and a tiny front wheel off my brother's bike and we had a cracking chopper bike. It got stolen when we moved to Newcastle though.
You must log in or register to reply here.
Similar threads