I go past this every morning. What the fook is it?

--It is by the perimeter fence at Leavesden Studios, although it's been there a long time so perhaps it, whatever it is, dates from before the studios when it was Leavesden airfield. What we have is (a) some sort of armoured vehicle and (b) the thing- whatever it is. Can't get closer due to the fence and camera limitations. 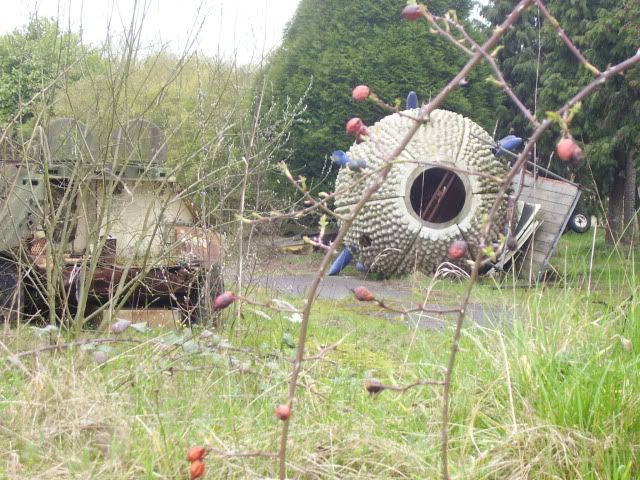 The armoured vehicle, just in case anyone is more interested in that than the thing: 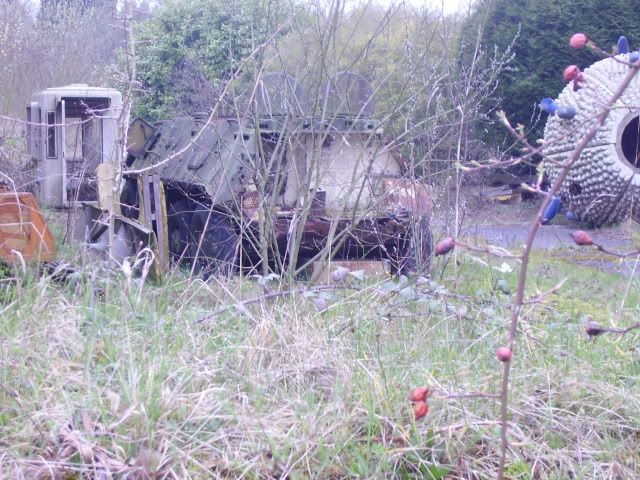 Anyway, I don't expect anyone to know what it is but hopefully there will be some good suggestions. As I was looking at it this morning another cyclist stopped, they didn't know what it was- but I promised to let them know if I find out.

Its a virus. A very big one.
OP

I haven't seen any anarcho-punk teletubbies, although perhaps they get up late. Or really early. Or they are scared of cyclists (although this seems less likely, anarchists generally like bicycles). Either way they ruined that trailer when they came in to land.

Location
Lincolnshire (Halfway up England on the right)

I've no idea what class of bird laid that, but I bet its eyes watered

Of course I know what it is. But if I tell you I'll have to kill you!
R

It rings a vague bell... hmmm Czech or Russian infantry carrier, like a BMP, to judge from the hatches.

It's "The Gall Stone". A fiendishly cunning 1950's Cold War weapon that incapacitates the enemy with crippling pain and ,when passed, diverts their sewers into their fresh water supplies and renders them incapable through gastroenteritis.

Looks like it has fallen off the waggon, whatever it is.

It was probably used in the film 'Escape From Rififi' starring Sean Connery and Brigit Bardot. They hid inside as they rolled downhill after blowing up the villain, Vlad Kapoor's nightclub hideout. (The nightclub was played by Baileys in Watford - there is a blue plaque on the wall to this day.)
The bobbly ball was filmed rolling down the Watford By-Pass in the early hours and film crews had trouble with the crowd scenes, keeping the residents, employed as extras, out of camera shot. They insisted wearing Hornets replica shirts over their guerilla gear... Elton John played a cameo role.

It's a toy for Clifford the big red dog. Or ( showing my age here ) digby the biggest dog in the world.

This is really annoying, because I have seen one of those before, in context. But I'm b8ggered if I can remember where.
6

Hmmm.. looks like what I had for breakfast yesterday. Thought it was a bit chewy...
N

I'm guessing that the Teletubby mobile home thingy is from a film, although looking at the list of films made there doesn't offer many clues as it's mainly been Harry Potter and post-'95 James Bond, other than Mortal Kombat, which I haven't seen.

The APC looks like fun, though I'm not sure it's a BTR as I think that had more definite wheel-arches (like this model) whereas the image appears to have slopping lowers and be a more traditional hexagon.

Location
In a corner

When spring comes it will uncurl and you'll realise it's a woodlouse.
OP

It is a surplus Soviet Space Capsule, and has been used in several films such as reconstructions of Komarov's fateful final mission.