In praise of Maradonna

He's a reformed druggie, a complete fruitcake who answered criticism of his teams qualifying campaign by accussing the Argentinian press of having each other up the arse, and the chances of the blazers at the FA appointing a similar personality to the England job are so far below zero they don't even register.

But hasn't he done a great job so far? He's got some quality players, but getting good footballers to perfom for you is a task many managers have failed to do in the past, and by all acounts the squad love him to bits and would crawl over broken glass for him. His touchline antics are worth watching the games for on their own, and I can't believe I'm saying this but if and when In-gur-land demise from the competition I will be rooting for the Argies.

maybe, but he had to be reminded of Milito's existence when it came to filling out the team sheet, and he didn't pick Zanetti or Cambiasso, despite their fabulous season at Inter - omissions that look even sillier when we see Demichelis getting skinned by just about any forward that wants to take him on.

And the interview about some of these aspects in post 1, that went slightly wrong in translation

I liked her early stuff but the last few albums have been chronic,
Oh thought you said Madonna

Maradonna=cheating little shoot and always will be.

Big respect for Maradonna, legendary footballer, despite the cheating he was one of the best to ever grace this earth. He has been awesome this competition, such a character, oozing charisma, don't see that in many England managers!

Ulreka will tell you different about Sven !
S

Since he got to South Africa things have been going his way , big time. It's easy to look attractive in that situation.
I look forward to seeing him in action when things get a bit tougher.
Roll on.

snakehips said:
Since he got to South Africa things have been going his way , big time. It's easy to look attractive in that situation.
I look forward to seeing him in action when things get a bit tougher.
Roll on.
Click to expand...

No doubt given half a chance he would cheat again and let it all go when/if they lose!
T

snakehips said:
It's easy to look attractive in that situation.
Click to expand...

i don't think any fat bearded bloke ever looks attractive...

I saw the last half hour of this game. Maradonna was fantastic entertainment, in fact if there was a 'red button' option to just watch him I'd have gone for that.
P

Maradonna will win the World Cup with the Band Of God. 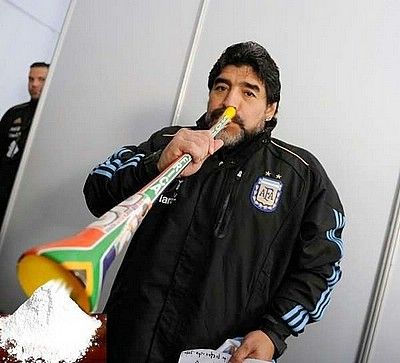 montage said:
no respect for maradonna here at all....he's a tw*t
Click to expand...

Which makes no difference at all to the fact that he remains one of the greatest players of all time.
You must log in or register to reply here.