This story popped up in today's Western Australian newspaper. Also some coverage in The Age. 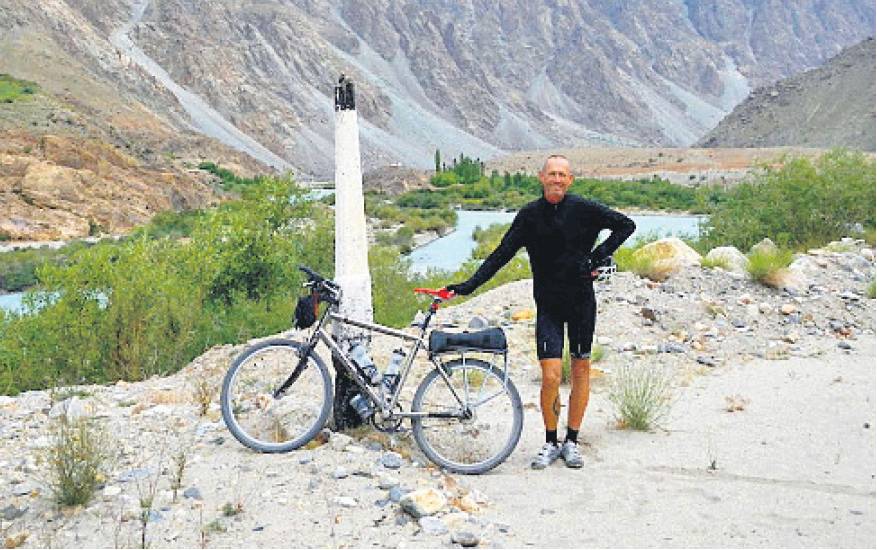 A Perth cyclist trapped for three days in a hotel during a military uprising in Tajikistan has described his fear as bullets ricocheted past on the street outside.

Brian Thompson was two months and 6500km into a cycling tour along the ancient Silk Road when he and his fellow travellers found themselves in Khorog, not far from the Afghanistan border, as government troops tried last week to seize control of the town.

Mr Thompson, 56, of Cottesloe, told The West Australian how he and his touring companions found themselves holed up in a hotel as fighting broke out on the street below.

“We were about 200m from a bridge where the fighting was fiercest … they were fighting for the bridge and it sounded like they were shooting over the top of us,” he said.

“A couple of times we heard ricochets (of bullets) outside on the street.”

Mr Thompson said the group’s local contact had appeared at the hotel during the three-day ordeal with “his eyes as wide as saucers” saying there were dead people outside on the street.

Mr Thompson, a retired small-business owner, and his touring companions desperately tried to make contact with their embassies in the intermittent times when communications were working.

He feared at one point he would not see his wife and two sons again.

“I’m disappointed to be coming home in some respects,” he said. “But I live in the best city in the world, I have a great family and here I am riding my bike in this s… place and you think, what am I doing.”

Mr Thompson and three other Australians were evacuated on Friday by a Tajik Government helicopter, organised by the Australian Embassy in Moscow, and were taken to the relative safety of the Tajik capital, Dushanbe.

He said the other Australians were safe and planned to continue their tour, which was originally intended to finish in Istanbul.
Click to expand...

Surely, that is the kind of thing you would expect to happen in that area? I wouldn't go there expecting it to be safe and quiet! Here is what I found after 10 seconds of research... (link)


BBC article said:
A former Soviet republic, Tajikistan plunged into civil war almost as soon as it became independent from the Soviet Union in 1991.

The five-year civil war between the Moscow-backed government and the Islamist-led opposition, in which up to 50,000 people were killed and over one-tenth of the population fled the country, ended in 1997 with a United Nations-brokered peace agreement.

Economic hardship is seen as a contributing to a renewed interest in Islam - including more radical forms - among young Tajiks.

Tajikistan has been accused by its neighbours of tolerating the presence of training camps for Islamist rebels on its territory, an accusation which it has strongly denied.

Tajikistan has relied heavily on Russian assistance to counter continuing security problems and cope with the dire economic situation. Skirmishes with drug smugglers crossing illegally from Afghanistan occur regularly, as Tajikistan is the first stop on the drugs route from there to Russia and the West.

Russia maintains military garrisons in Tajikistan and in 2004 took back control over a former Soviet space monitoring centre. These developments were widely seen as a sign of Russia's wish to counter increased US influence in Central Asia.
Click to expand...

Be smart, everyone. Expedition cycling is wonderful, but none of us needs to prove anything by willingly pedaling into harm's way. Those grandkids will never hear YOUR TALES if you get YOUR TAIL shot off in some out-of-the-way place during a conflict that has nothing to do with you.
You must log in or register to reply here.
Share:
Facebook Twitter Reddit Pinterest Tumblr WhatsApp Email Link
Top Bottom