Just back from Normandy.

Firstly, apologies for lack of pics but they are downloaded on photobucket and as far as I know that means they can't be uploaded onto this site??
A change in the weather forced me to change plans and abandon my idea of covering the Scottish Western Isles from north to south during my 12 days holiday which is about to come to an end

. Had a look on the internet a couple of weeks ago and decided to head for Normandy....

Saturday 10th July............... Train from Glasgow to London Euston. No problem getting the loaded up Tricross with 2 rear panniers on as I had a reserved space. Strapped it into the space showed to me by the Virgin train staff, then headed off to my seat. Less than 5 hours later I was at Euston station. Had a couple of hours to waste before my connection from Victoria to Portsmouth so headed off to the west end and the usual tourist traps. Can't say I envy you guys who have to negotiate London traffic on a regular basis. Having done it before by car and motorbike a few times I knew what to expect and wasn't disappointed. No-one gives an inch and if you get in the wrong lane...tough! Anyway, survived the experience and got to Victoria. Onto a very crowded train to Portsmouth. Stayed on the train to Portmouth harbour, thinking logically that would be the correct station from which to access the harbour for the ferry. It is; if you're going to the Isle of Wight! If you're going across the channel, you should have jumped off at Portsmouth and Southsea.... so I had a 2 mile bonus cycle to the Brittany ferries terminal. Caught the 11pm overnighter to Ouistreham, just outside Caen. Spoke to a couple of other groups of cyclo-tourists on the ferry. 3 Bath uni graduates cycling from Bath to..........Barcelona

. Nice one, guys! They are taking their time about it, I think they said 4 weeks, but even so, a great thing to do. The other 3 guys were about my age (48) and heading for Carcassonne near Toulouse! Well done to them as well. I felt kind of guilty getting off the ferry in the morning, heading to Caen for a 6 night stay in the comfort of a hotel.
Mileage for day, 15.

Sunday 11th July........ Rolled off the ferry at Ouistreham at 7am into warm sunshine

. Found the first of many well maintained cycle paths around Caen. This one runs all the way from the ferry into Caen city centre, about 8 miles. So found myself in Caen at 8.30 am but not able to check into my hotel 'til 2pm. Decided to head back out to Ouistreham past Pegasus Bridge and the first house in France to be liberated at the D-Day landings. After Oustreham, carried on round the coast and stopped at Courseulles sur mer for lunch. After that, carried on to Arromanches, before cutting inland back to Caen, and getting to my hotel about 6 pm. A quick shower then out for dinner and to find somewhere to watch the world cup final. Surprisingly, I found that most French were supporting the Spaniards. Hoping for the Dutch to do the business, I found a pub and watched the disappointing game before heading back to the hotel for some much needed sleep.
Mileage for the day.....65

Monday 12th July........ Weather still very warm and sunny. Bought a map of cycle routes in the Calvados area. This would turn out to be invaluable! Headed north out of Caen, passing by Pegasus Bridge again. At the next bridge, turned right and followed an off road track to Merville, then east along the coast through Cabourg, Dives sur Mer, Auberville, Benerville and into Deaville/Trouville. Decided to take the easy way back to Caen and caught the very efficient and clean train back to Caen, changing at Lisieux.
Todays mileage.....37

Tuesday 13th July...... Still nice weather. Visited the Caen war memorial in the morning, then headed out to the coast on a different route to Courseulles sur Mer. From there headed back along the coast to Ouistreham and back into Caen via the well trodden cycle path.
Mileage today.... 50.

Wednesday 14th July.... First day of rain. Only to be expected as it was a public holiday in France, Bastille day. It also meant most shops were shut, and trains were on a sunday service. They do take their Sundays and holidays seriously in France! I headed south east out of Caen, once I eventually managed to find the D229 road! My route took me through Soliers, Bellengreville, Mezidon, and down to St Pierre sur Dives for lunch. Got caught out in a few downpours and longer lasting showers, but at least it was warm rain, so carried on. There are plenty of reminders around Normandy that a few showers of summer rain is nothing compared to what the soldiers had to endure a few generations ago. After St Pierre sur Dives, I headed north east along the D511 to Lisieux. Being Bastille day, as stated everything was shut so I didn't hang around in the rain too long before catching the train back to Caen.
Mileage for today....50 again!

Thursday 15th July..... Strong south west wind today, and much cooler than yesterday. Headed northwest for Bayeux, along the D126. Can't believe how quiet all these roads are. Must be the network of motorways and other main roads that take the traffic away from all these other roads, leaving them to be used as great cycle routes, with surfaces like snooker tables compared to our 3rd rate offerings! This was a great route to Bayeux, through some really nice villages and countryside. Bayeux itself was fine, but not being a fan of large towns bursting with tourists, I didn't hang about for long. Instead I headed back to Caen, retracing the route I had come on in the opposite direction.
Mileage for today...51.

Friday 16th July..... Knees are beginning to feel the pace of the last 5 days, especially the left one! Decide to have an easier day today so caught the train from Caen down to Le Mns. Not cheap at €48, but a pleasant experience again when compared to our British equivalent. Clean, un-crowded and on time. Had lunch in Le Mans then headed south to the 24 hour race circuit and museum. Had a quick visit to the museum, but what I really wanted to do was a circuit of the race track, as most of it is run on public roads. With some help from staff at the museum, I was able to find the point where the circuit starts on public roads. Following it after that was very easy, just keep the high wire fence on your right, and follow the corners with the rumble strips and tyre marks! The full circuit is about 17 km. After completing it, headed back into the centre of Le Mans. Had a seat while I wasted time as my train didn't leave until about 6.30pm.. An elderly French gent came along and was admiring the Tricross so I had a 30 minute conversation with him in my schoolboy French before heading to the train station.
Todays miles...25

Saturday 17th July..... Last day today, as I have to catch the ferry from Ouistreham at 11pm. Which means of course I am stuck with carrying the panniers all day. Left the hotel about 1030am and went a trip around Caen taking some photos. Got the map out and decided that the best plan of action today would be to head west into the wind, that way it would be easier once I turned around and headed for the ferry. I headed along the D126 again, in the direction of Bayeux. At Rocqueville I turned left and headed south to Tilly sur Seulles. Amazing deserted roads again. At Tilly sur Seulles, I realised I was going to be far too early if I headed east towards Caen, so carried on south again, to Villers Bocage and Longvillers. From Longvillers, started to head north east towards Caen following the D214. Made good progress with a tail wind, and found myself back in Caen by about 7.30 pm. Decided to head to Ouistreham along the riverside bike path again! Had dinner at a restaurant in Ouistreham before heading to the ferry, sailing at 11pm.
Mileage for today....73 (highest ever for me in a day).

Sunday 18th July........ Ferry arrived in Portsmouth about 6.30 am.. Headed off to Portsmouth harbour train station and caught an earlier train than planned. Was in London Waterloo about 9.20am and headed up to Euston. Thanks to members on here whose directions were spot on, it was easy to find and only took about 15 minutes in the Sunday morning traffic; although I still managed to get cut-up by a London bus. Caught the 1045 train to Glasgow and then home...
Miles for today..... 7

Total for trip....... 373. The Tricross was great and did everything asked of it, a great all rounder and ideal for this sort of trip.

Very interesting Brandane. Just this morning I was talking to my brother about doing Normandy on our bikes.

Location
In green and pleasant hills.

Good write up, nice hearing of others experiences. Pics would be good, but I haven't the foggiest on how to put them on.
P

Have just come back from Houlgate, not far from Caen. What a beautiful little place!! Perfect in every way. I am determined to come back with bikes v soon.

I use photobucket; you need the 'img' link which is visible beneath the picture. Just cut and paste into your forum reply. Like this: 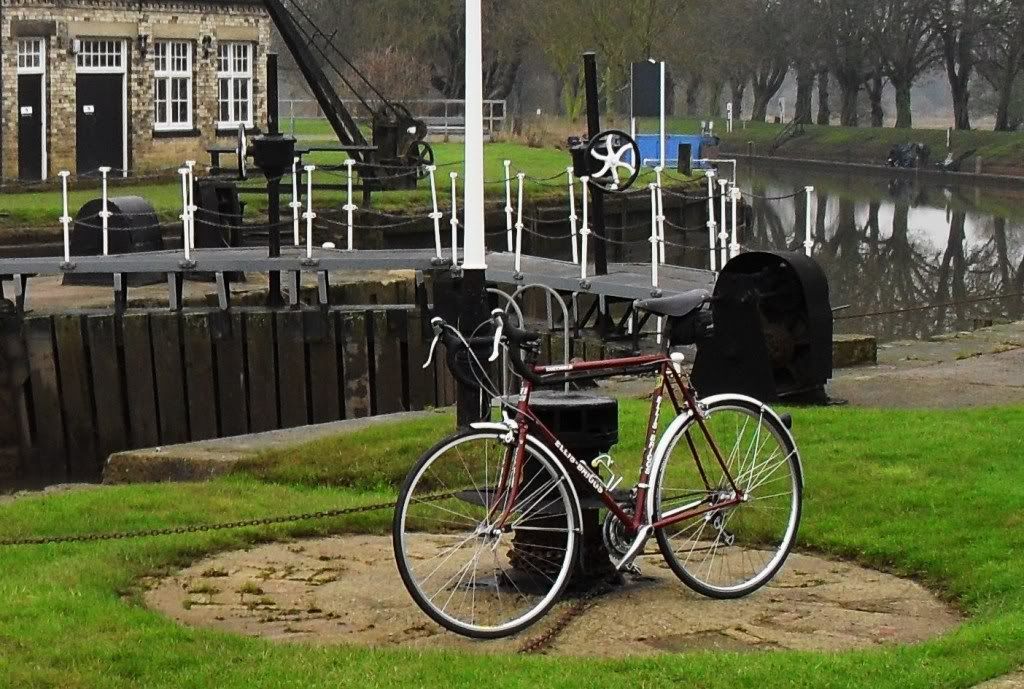 ps thanks for the chance to show off my bike!

very interesting review of ur trip , would love to do a tour in france on the bike , having done many on the motorbike
and like the idea of using a base and touring from there

just 1 point , did u book a cycle space on the return train trip from london and the train to and from portsmouth
You must log in or register to reply here.
Similar threads