Lamp test: Lumi vs Luxeon vs Cateye vs Carbide

I was lucky enough to blag one of those Tesco 3W Luxeon torches, so I thought it was time to do a side-by-side lamp test. On trial:

First, everything has to be mounted. The Luxeon is held on with a rubber bangle (think of it as a fat cheap Dinotte). The carbide lamp is on one of those old-school flat spade-like lamp brackets which I've bodged into the headset spacer stack. The CatEye has its own strap, and the Lumi of course has that superb industrial ziptie. 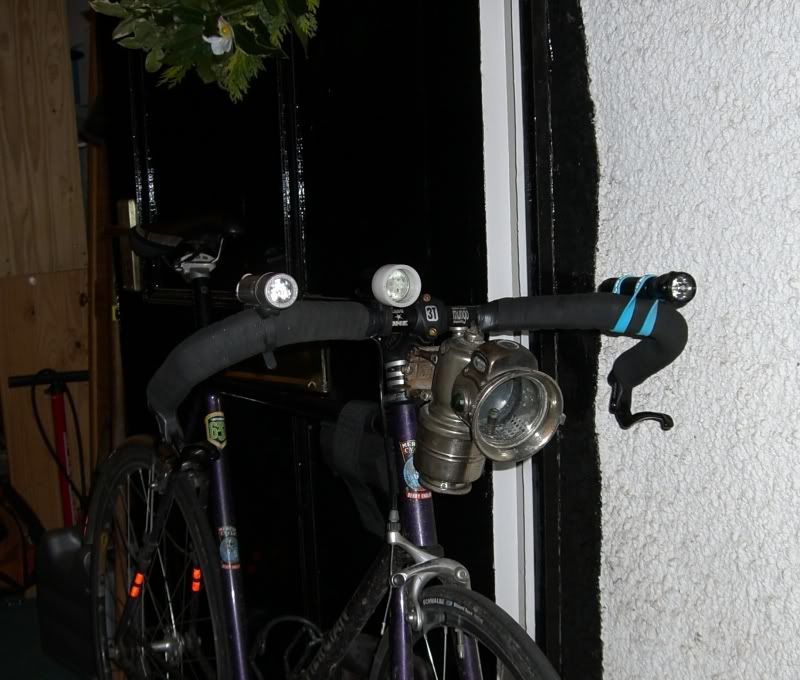 Now, about that carbide lamp. You put calcium carbide rocks in the bottom, water in the top, and drip water onto the rocks. The rocks fizz and stink and the gas that comes off is flammable: it is routed to the lamp head where there's a burner in front of a reflector. In theory. What actually happened was this: 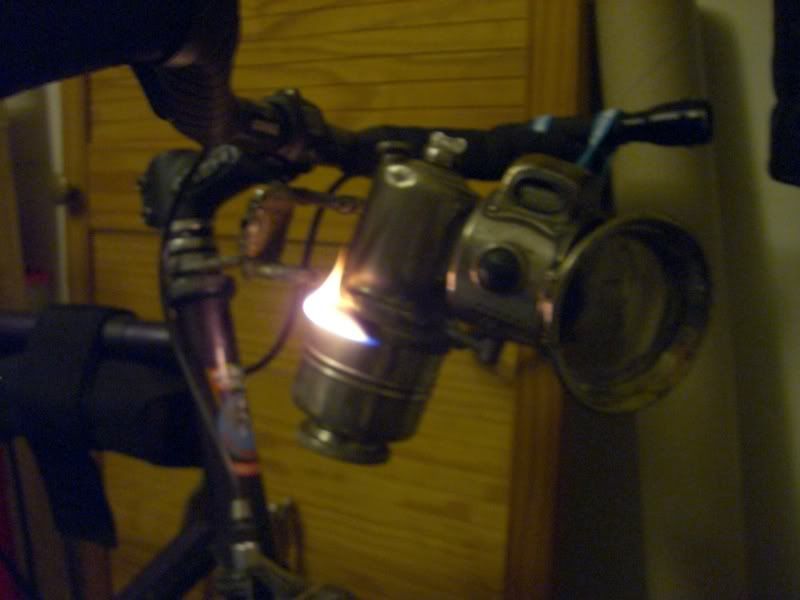 ...so the carbide lamp bows out until I've given it some more serious tests! Whoops!

Okay, the three survivors are fired up. Here's what they look like from the front: 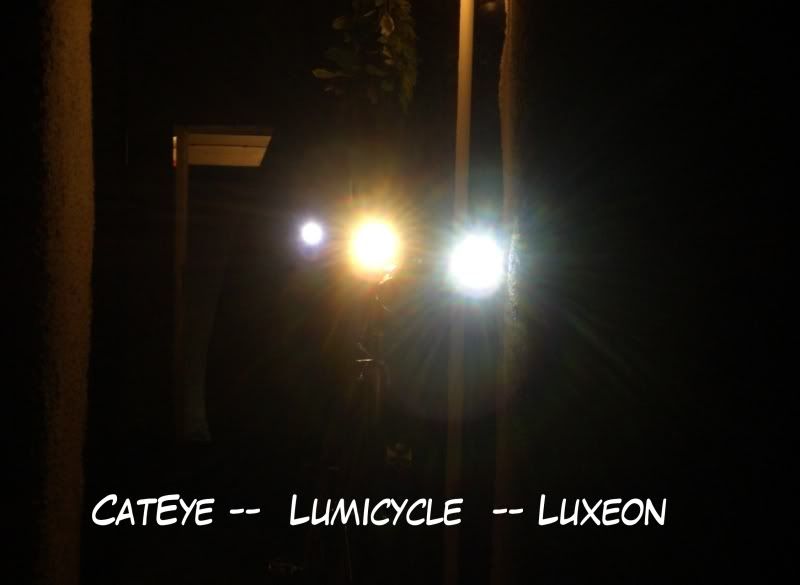 The Luxeon (far right) holds its own against the Lumi (centre) head-on, but I've got a glow-ring on the Lumi which totally owns anything on Earth from the side. The CatEye (left) is okay to be seen by, which is what it is designed for.

The next three shots are all single beams onto the same wall. First the Lumi: 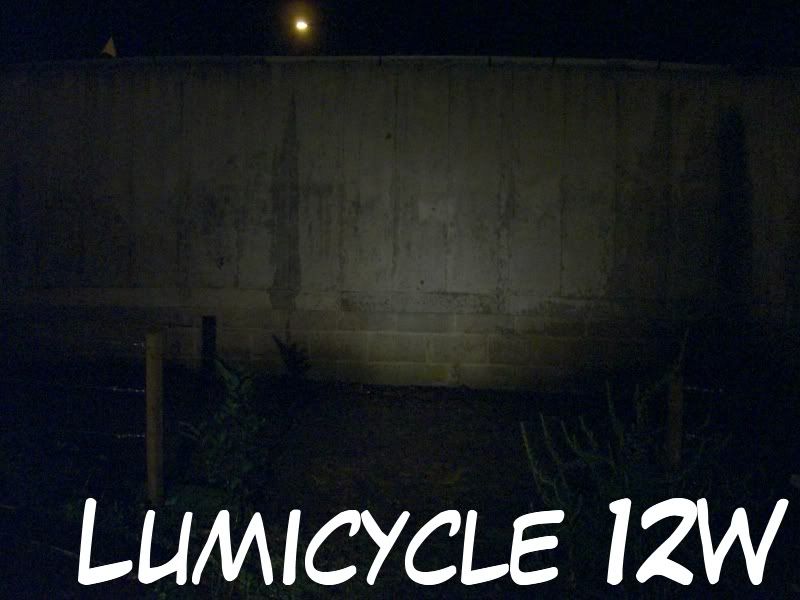 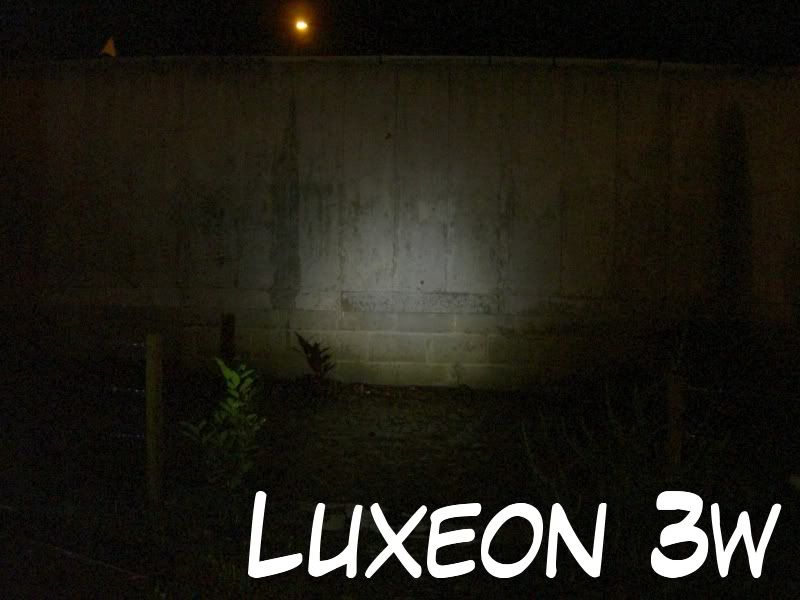 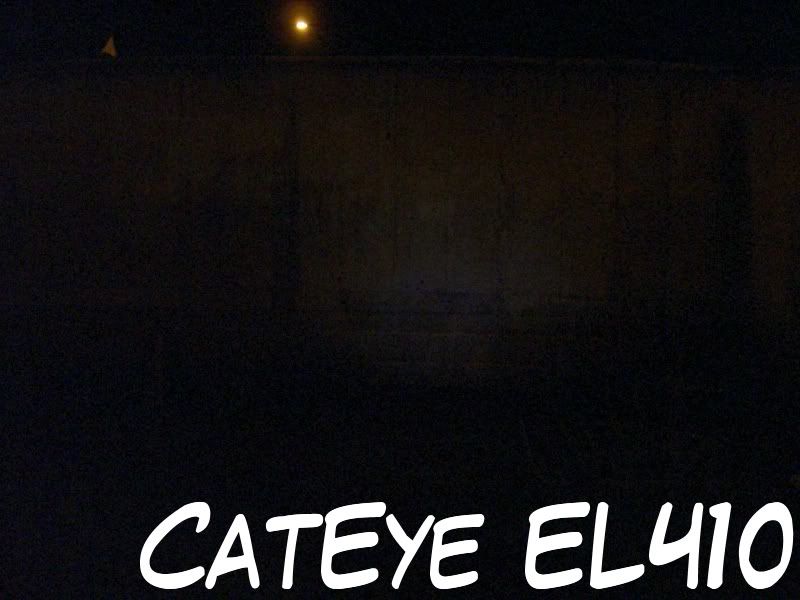 Conclusion? The 3W Luxeon is an absolute beast and a total bargain if you can find the Tesco torch pack. It's clearly holding its own against the Lumi, giving the traditional LED tight beam with less scatter. The torch is adjustable though, like a Maglite.

Downside? The Luxeon is a beast at eating power too, and I reckon the two AA's provided won't give it more than an hour of run-time. The Lumi gets close to 3h per charge. Still, Dinottes feast upon tender battery flesh too...

That Tesco torch, er, when and how much? I could do with a spare 'get you home light' for when my run-time calculation mojo springs a leak.
OP

Not all Tescos, and a tenner. Which is so cheap it is probably incorrect

Our big Tesco didn't have any - they're marked as "3 Watt Luxeon torch and Keylight Set" - so I blagged one from a kind ACFer whose Tesco did...

andygates said:
Not all Tescos, and a tenner. Which is so cheap it is probably incorrect

Our big Tesco didn't have any - they're marked as "3 Watt Luxeon torch and Keylight Set" - so I blagged one from a kind ACFer whose Tesco did...
Click to expand...

Ah. A quick search of the Tesco site brings up this, so what you have looks like a totally boneyfido bargain. Git!

Run some one got a boneyfido bargain Run

These torches were on offer at some stores before Christmas at £7,50 - including a keyring LED torch.

I got a couple and have converted one to run on Dymano.

I made a webpage to show it.