Outback cycle-tourist in The Australian

The Weekend Australian (Paywall) has a story on Australian outback cyclist, Russell Bathard. The text of the article is below. There are more photos available in the Australian gallery. 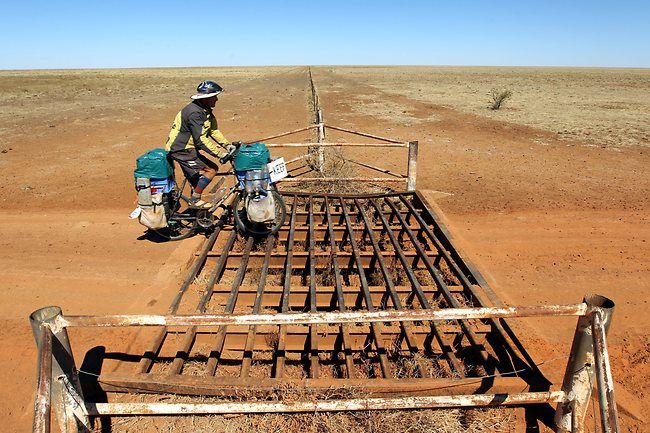 EVERY day, Russell Bathard battles elements that few of our Olympians have ever tested themselves against.

Strong winds that can throw him off his bike. Sandy roads that can bog him down. Snakes, dingoes, road trains and cattle grids -- and always extreme heat during the day and extreme cold at night.

While former Tour de France winner Cadel Evans and the cream of the world's top cyclists hurtle around the streets of London and the Olympic velodrome over the next two weeks, 63-year old Bathard will continue his two-wheeled outback odyssey on a second-hand bicycle, saddled with his belongings and supplies -- and showing all the sort of character needed to win medals on the other side of the world.

Bathard has been riding his bike through Australia's deserts for 30 years without backup or support crew. If something goes wrong, the responsibility is his and his alone.

What he shares with our Olympians is a sense of focus. For Bathard, riding a bike through such extreme country requires stripping away all else and focusing purely on survival.

"When you're doing something like this, everything gets stripped back to the basics," he said. "I have four things I focus on every day: water, food, shelter, and the state of the bike. I don't have any other distractions, no mobile phone or GPS. But I have ultimate responsibility for my own survival."

The Weekend Australian caught up with Bathard on a dusty road, 150km west of Mt Isa, but for the past 30 years, he has spent a few months each year living in Glen Waverley in Melbourne's eastern suburbs, then getting on his bike and riding around the outback.

On this trip he left Melbourne three months ago and since then has ridden his bike to Mildura, then through South Australia and along the Oodnadatta Track to Alice Springs, then across the quaintly named Sandover Highway through the even more quaintly named Utopia Station before crossing over to Queensland and further east to Mt Isa.

When on the road, he carries enough food and water for about a week, but then he has to rely on finding a water supply, something he's been able to do so far through good planning and luck, albeit with a few close shaves.

At night, he always sleeps rough, finding a good place to camp as the sun goes down so he can get a good night's sleep under the stars before heading off again when the sun comes up.

He needs a tree or a rock so that his bike is upright. If it falls over, the whole weight distribution he has worked out can be thrown, and he can lose some of his precious water.

Where he's been could be a whole new verse of "I've been everywhere, man".

He has cycled up and down the east coast five times, been over to the west coast and back twice, and had numerous trips "filling in the gaps", as he puts it, between major highways.

Bathard said that despite being in some of the more remote parts of Australia, most people simply waved at him when they drove past in four-wheel-drives or cattle trucks.

"People in cars or four-wheel-drives are just indifferent to you," he said. "The only people who stop and talk to you are the Aborigines, they'll often give you food, sometimes shelter."

Bathard was a schoolteacher in the 1970s who then went to work at the research station on Orpheous Island off north Queensland in the 1980s. It was then that he started these long cycling trips.

It costs him about $10 a day, but he is financially comfortable enough to be able to pay considerably more for a holiday. So why does he do this?

"Because there's a tremendous sense of achievement in doing something like this," he said. "But it's more than that. I love being in the bush and living with the bush. A couple of weeks ago I saw a whole flock of parrots turning at the same time, and their colours glinted in the sun. You just don't see things like that in the city."

What are little things to passing motorists matter a lot to him. One gripe was that cattle grids in Queensland are wider than those in the Northern Territory, putting a lot more pressure on his bike when he rides over them.

Where he has been for the past month, on tracks in the Northern Territory and Queensland, he sees an average of about two cars or two trucks a day.

"I wash my hands in the dirt, I can smell rain well before I can see it or feel it when I'm out here," he said.

Back in Melbourne, his mother, 88-year-old Eva, still worries about him when he's away.

"Any mother would, but he rings in when he can," she said.

An amazing story. Utter respect to people that do things as crazy as this.

Well thats pretty impressive, but 30 years of touring in his homeland?
You don't really need that much training before venturing to a foreign country

snorri said:
Well thats pretty impressive, but 30 years of touring in his homeland?
Wouldn't you think he would want to explore a bit further afield?
Click to expand...


Pretty big backyard though. But in agreement with you should/could go further afield.
OP
OP

172traindriver said:
Pretty big backyard though. But in agreement with you should/could go further afield.
Click to expand...


It is in the genes of Aussies ... http://en.wikipedia.org/wiki/Swagman

Australia is a great country for doing that sort of thing. I spent ten months cyclng through the bush a few years ago and tough as the bush can be it is a fantastic experience to be out there, alone and utterly self reliant.
You must log in or register to reply here.

The Worrying Symptoms of an Experienced Cycle Tourist