Hi everyone, I'm in the process of building a fixed speed commuter bike and have come across a stumbling block...

I need to replace the Bottom Bracket, it is currently the type that has a lockring and a seperate spindle, rather than the cartridge type... I have removed all the parts from the chainring side of the frame, and the spindle, but I am having an awful time removing the cup from the other side of the frame... I understand these are not usually removed for routine maintenance, but I am replacing the whole unit with a sealed cartridge.

I was wondering if anyone had any tips for removal as the thing is stuck fast... is the old trick of heating up the threads with a blowtorch a good or bad idea? I have used it many times on my car when trying to free siezed bolts as the two different types of metal expand at different rates... Would this have any adverse effect on anything other than paintwork?

What does it look like? The left hand cup is a right hand thread by the way so undo it counter clockwise. The usual way is to give it a good soaking with penetrating oil for at least 24 hours. Then just use ever longer levers until it shifts. The usual problem is how to keep the tool from slipping when you're applying the enormous torque needed to turn the cup and the solution depends entirely on what type of cup you have.

Yep, definitely give it a soak and come back to it tomorrow.

Tomorrow, brute it. Get a cheater bar on your spanner so you have a good two feet of lever. Have a burly friend stop the bike from moving. And be sure you're turning it the right way

(Heat may mess with the steel but probably won't - is is a fancy steel frame or something bog-standard?)
OP

well, the cup is a plain machined, shiny metal one... has 2 flats, measuring 1.5 inches apart, they're about 2mm deep before you get to the frame.

the cup sits flush with the frame, apart from the flats which are recessed. picture of a very similar cup below. the piece on the far right.

I have tried putting the flats in a vice & turning, but they keep popping off. I have just read an article by sheldon brown that shows a makeshift tool that clamps down on teh cup and helps you shift it... A bolt through the crank hole, with packing washers. tighten one end depending on which way your cup is threaded.

I have left it with some penetrating oil on in the shed, so come tomorrow after work I may be able to get it out with the held of this tool from sheldon... If I can find a suitable bolt...

And it's a bog standard steel, reynolds something or other I believe,

to get that out you'll need to get the tool to do it or take the frame into your LBS and ask them to do it for you it might cost a £5 or so. what you have is a old coter pin BB

If your vice won't grip it, you have a cheesy vice. A serious engineer's vice should give you enough grip, and is a worthwhile investment for all sorts of workshop stuff. Make sure the vice is fitted to something really solid. (Not a WorkMate, or you'll just be waltzing round the shed with it).

If you're gripping the cup in the vice and heaving on the frame, you should have enough leverage. If penetrating oil doesn't do the doing, yes, try a little heat. You don't have to get everything red hot, so as long as you don't overdo it you shouldn't damage the frame by heating it gently. A paintstripping heat gun will do nicely. Let the whole thing cool down before trying again. Repeat as necesary. Sometimes two or three cycles of warming and cooling will do it if one doesn't (but you know this from your car work).

If the bottom bracket's still in place, the grease may smoke a bit as you warm it up. And you'll burn the paint off, but you don't seem worried about that, so presumably you're going to have the frame re-finished anyway.

Finally, there's nothing wrong with non-cartridge bottom brackets. As long as the "fixed" cup (in your case, it really is fixed, apparently) is in good condition, there's no reason why you can't build the bottom bracket back up with the fixed cup that's in there. You can get a new square-taper spindle if necessary, and they come in different lengths just like cartridge ones.

The way I've done this in the past is to be subtle. Basically you need to bolt your spanner onto the cup so it can't come off. I used a hugemungous bolt (from a car towball mounting) and stacks of scrap as washers.

I've never got on with getting these cups off in a vice. Too much damn bike in the way, and it pops out for me too.

Phil's right about being able to reuse that cup though. If it really won't budge, reuse it.

Don't agree about using the stuck cup, the longer it sits in the frame the more difficult it will be to get the bastard out. Twenty years ago I would have agreed but you try finding a half decent old style BB at a modern bike shop. Aint gonna happen, all the medium to high quality units are cartridge now and the low end stuff isn't worth the box it comes in.
OP

well, yesterday I rummaged around and found the nut, bolt & washer I'll need to make one of these contraptions..
' 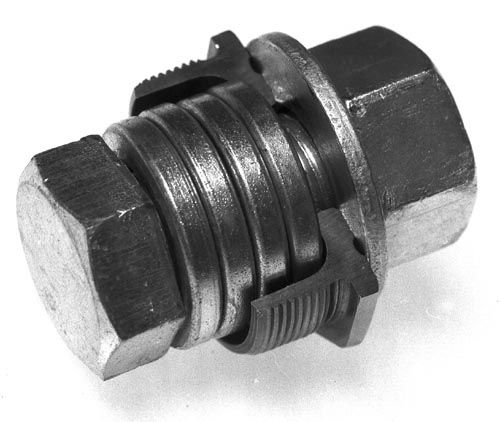 I haven't had time to test it out yet, but apparently with some brute force this system works well, and it gives you the opportunity to bolt your spanners on to the outside, so they don't slip off.

I'll let you know if it works.

mine is pretty similar, but slightly smaller.

One quick question, how do i make sure i'm turning it the right way? I don't want to put tons of force into it, only to be tightening it up even more!
OP

I think the blow torch is needed. I snapped 2 bolts today trying to undo it... Luckilly I bought 10 bolts so I can keep trying.

Let us know if you get it out, and how.

Just don't reduce the frame to twisted steel spaghetti in the process.
OP

Am going to let it cool completely and try again...

Do you have a Dremel?
You must log in or register to reply here.
Similar threads