Road signage on the cheap endangers us all!

Following a trip in the car to Edinburgh for a course, and driving in wet and dark conditions, I have come up with a theory which potentially endangers us all. It's not an excuse for poor driving, but it certainly doesn't help.

I've noticed a huge increase in recent years of the use of white painted direction signs on the road surface, instead of properly mounted signposts at the side of the road. Presumably this is a cost cutting exercise as I can imagine there is some expense involved in the manufacture and mounting of proper signs. Paint on the road is fine, as long as you know it's there! But take a driver out of their regular environment and it's a different matter, as I have been finding out recently. On dark, wet, busy roads the white paint is all but invisible until you are quite literally almost on top of it. Especially because in true British style it is not renewed as often as it should be and can be faded to the point of uselessness.

It goes some way to explaining why you see so many drivers not looking beyond the few feet in front of their bonnet at roundabouts in particular, as they try to pick out lane markings and direction arrows on the road. It's maybe cheap, roads bosses, but it's dangerous and has the potential to cost lives! 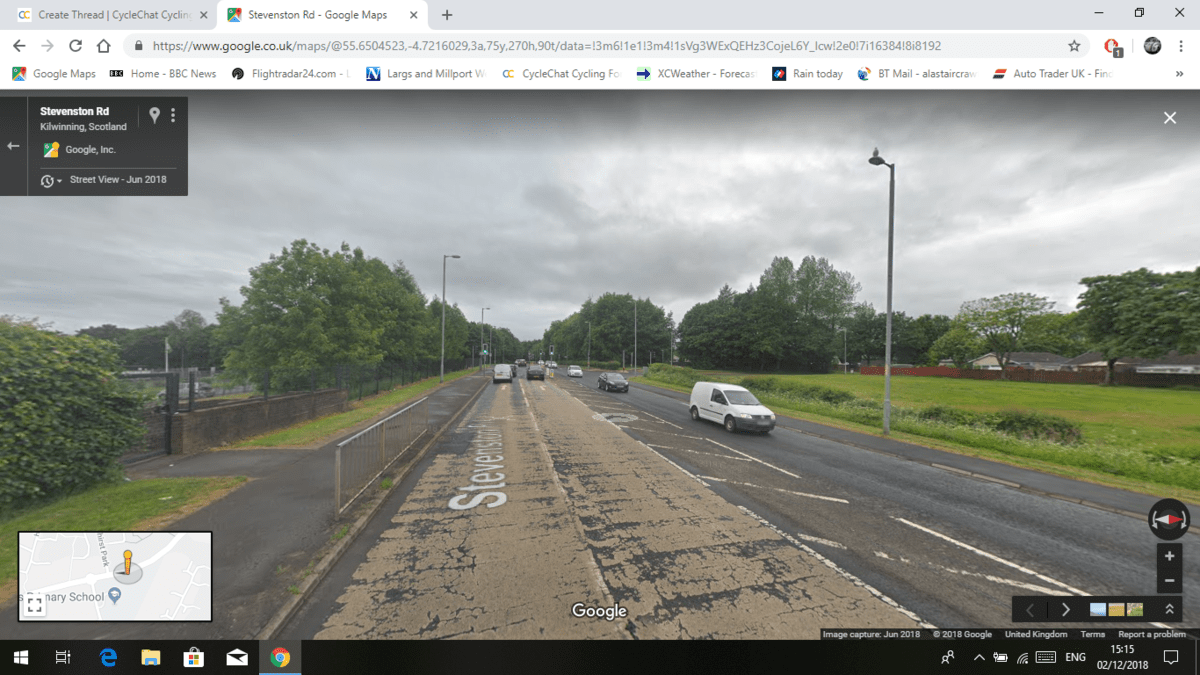 This abomination of a road is one local example. If you're going straight ahead you need to be in the left lane on approach to the first set of lights, but note the absence of arrows on the road until a few yards short of the lights. So if there's even a short queue of traffic you're not going to see them, even in good light conditions... Once through the lights you have to switch to the RIGHT lane to go straight ahead as left is for left turn only! Again the arrows are just prior to the mini roundabout, which is only about 30 yards from the lights... Fine if you're familiar with the road layout, but they don't consider someone driving a large vehicle coming across this on a wet dark night for the first time.
I consider myself a very experienced road user - bikes, motorbikes, cars, artics, and being driving since 1982. But I was struggling to negotiate similar road systems in Edinburgh traffic last week.

Also the cutting of hedges seems to now not get reviewed, lots of hedges covering signs, the hedges are cut, but years ago the tractor driver would get out & trim up the the sign but hand, now they get as close to the sign with the tractor mounted unit & then start after the sign.

I agree, @Brandane. If I go anywhere strange, I hate junctions where there is queueing traffic since the traffic is obscuring the 'left only' and 'right only' lanes. It becomes a nightmare to change lanes since local drivers view it as pushing in.

You are right.
It's the same when cycling on an unfamiliar road, sometimes the road markings are under the cars in front of you, then you're in the wrong lane for the direction you want to take ... and you get beeped at!

The police around here believe in having no road markings !

Their bright idea is that if people do not know what to do or which way to go then they will drive more carefully.

You can have too much signage which distracts drivers from concentrating on the road ahead. Too much markings can similarly make folk follow it blindly and don't concentrate on the road ahead either. Its difficult to find the right balance though :-/

Though i agree with the pointless markings ,most day trip drivers wont see anything other than the Sat Nav screen.
And the one's with them in the windscreen so they cant actually see anything are just ....words fail me

Driving into Paisley from the M8 eastbound looking for the hospital in the dark. There are signs but mostly hidden behind bushes and trees and impossible to make out especially on my own when watching other traffic takes priority. Many of us from rural parts further north are referred here which is really a bit of a nightmare. Public transport? Don’t even think about it.

In rural areas signs never get washed so if they're under trees they gradually become obscured by green mildew.

I've long thought that white paint manufacturers must give bungs to highways engineers to use as much paint as possible.
S

Ah but the advantage of the markings being obscured by short queues is that the extra queues caused by confused drivers changing lanes late or having second or third attempts at junctions make it easier to justify building more roads, which is more work for highways designers.

That's bonkers. They haven't got any money for new roads.

Don't forget though that the right hand lane is the German saloon car lane and they need to be there early if they're not fitted with indicators.

Phaeton said:
Also the cutting of hedges seems to now not get reviewed, lots of hedges covering signs, the hedges are cut, but years ago the tractor driver would get out & trim up the the sign but hand, now they get as close to the sign with the tractor mounted unit & then start after the sign.
Click to expand...

Mostly, around here the tractor driver keeps going, trimming the signs as well!
You must log in or register to reply here.
Similar threads