I ran across this frame in another forum, and drove about 60 miles north to meet the seller, who had this as a frame he wanted to sell. I had one from the previous year once, and had ridden it so long that I had gotten the frame all noodly. It had a hard life before I got it, and all the miles I put on it didn't help. I was surprised to see this frame on the forum for sale, as they were not plentiful, especially in my size, and also because this bicycle is made of Columbus Tubing, and so may be expensive. I procrastinated, and the price came down, but I still procrastinated, and when the thread went dead, I thought the poster may have donated it somewhere. I was going to message him about it, when I saw he had just reposted it, after three months, with a truly significant price drop, so I messaged him right then and there, and set up a time for the exchange of currency and bicycle, at a Northern Illinois truck stop and cafe. (The cafe was a time capsule, right out of the mid-1970s)(( Dark, woody paneling, heavy captains chairs, formica tables, ceiling fans, fake stained glass, shag carpet)) It was very hot outside, and all sorts of vintage autos were gassing up, on the way to a meeting in Southern Illinois. The bike started as a frame, fork, and headset, as well as a seatpost and brakes, with original straddle wires, which are necessary, as the brakes are set more narrowly than current fashion. The rest I added, with a more modern derailleur, bar end shifters, a five speed rear wheel and cog, as it won't take more than that, a matching front wheel, a newer front derailleur (both derailleurs are Deore) and a newer stem and bars with nicer brake levers. 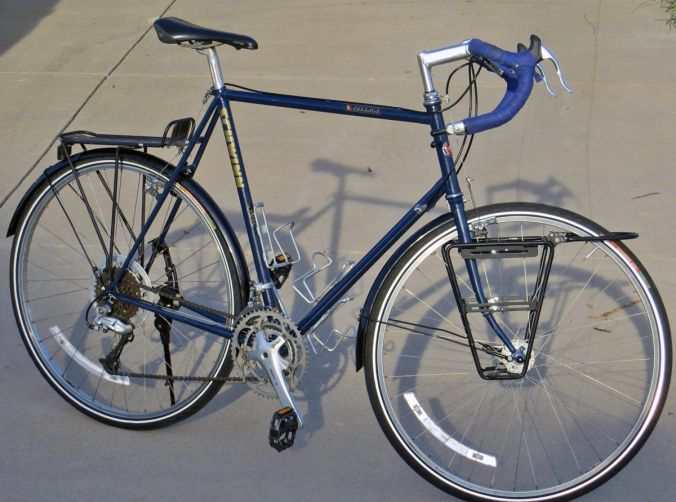 I also added racks, fenders, and a Shimano Octalink BB with crank, and changed gearing to 53-39-30 on the crankset. I also had to order new downtube cable stops, but thanks to my own supplies and those of my local bicycle co-op, I was able to keep this build below $100.00 US.

That's a beaut GA, especially for that price.

I think their paint scheme for this in 1986 was their best ever. Voyageurs were forest green and gold graphics that year, IIRC. But I love the blue. 1987(?) was magenta/pink, and I think those were the two years the Passage was in the catalog. From what i have seen of the catalogs, Passage wasn't even in the 1987 catalog, and 1985 there was the Voyageur, Voyageur SP, and the LeTour, a more basic model, more like a sport/tourer. By the way, the tires on this are Vittoria Rando/cross in I think 700x35. The original bicycle was built for 27x1-1/4.
Last edited: 25 Aug 2019
OP

I had the Passage out for a trip to the grocery store, about 8 miles, and it did a splendid job on hills and flats. It's nice to have the 53 tooth big ring, so I'm not flailing on the downhills, but the chainring needs straightening,
You must log in or register to reply here.
Similar threads