Time for an upgrade to my Chinese CX, front HYrd and rear Spyre brakes are being replaced by Shimano hydraulics.
This also means that I have to upgrade to 11 speed as well. I have the RS685 shifters and calipers, plus front and rear mechs, cassette and chain.
I thought the shifters and brakes would be already assembled, with the system already bled as I have are them advertised like this, but it came in parts with bottles of oil.
I would have had to do the back brakes myself anyway as the hose has to go through the frame.
For those interested I will keep you up to date with progress
Last edited: 9 Mar 2015
OP 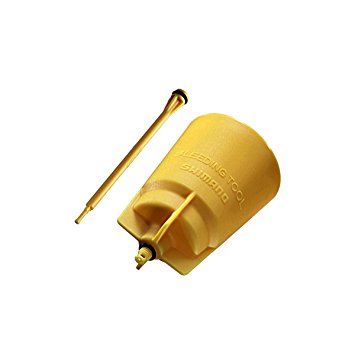 Location
The Isle of Carl

...or use this bleed kit

The epic bleed kit is what I bought... Don't puss about with the cheepo poundshop type stuff.

The Epic is as the kids say Epic!
OP

I got the Shimano bleed kit from Merlin, free delivery and if arrived the next day
OP

Its part done, everything is fitted, just bled the brakes, messy business.
Only fly was that my supposedly 11 speed wheelset isn't compatible. Its a V3 Kinesis CXDisc wheelset bought January last year, bought as a V3, but looks like I got sold a V2 which is 10 speed not 11.
Got around that by removing a cog and fitting a spacer behind the cassette, so that the lockring would do up.
That takes it back to 10 speed, but I don't see that as a problem.
Up next is indexing
OP

Did a test ride yesterday, fairly hilly 30 miles in dampish conditions with a few mates. Felt I had to keep my distance a bit on descents because the brakes were that good, I was feeling my way with how much pressure was required on the levers. Its more subtle than before as you don't have to pull very hard.
I finally have a rear brake that works well, before I felt that the rear never was very good because the brake housing went through the frame so there were too many bends involved (including around the inside of the handlebars).
The brake action is light and does take a bit of getting used to.
Comparing to the best brake I had used before which was the TRP HyRd, I would say there is no comparison, there is more braking force, more modulation and a much nicer feel.

Installation was Ok, installing the shifters was the same as any others, and if you have bled hydraulics on your MTB before then that won't hold any surprises for you.

One thing I will say about the 5800 series is that the front mech is fantastic, it has a much bigger lever on it, and the shifter action is very light and positive.

The only downside to all this is the cost, Wiggle did a deal at £369 (+3% Quidco) for the shifters and calipers. The rear and rear mech, chain and cassette came to £82.

There will be some recoup of cost as I will be selling a set of 5700 shifters, and the Hyrd and Spyre

Disc brakes take a short while to bed in.

Your fairly hilly 30 miles will probably have done the job, but you may find braking performance increases a little as you ride further.

Thanks, this is really useful, as I'm thinking of doing the same on my Croix de Fer.

I think I need:
Wheelset (as I too only have a 10 speed)
Cassette
Chain
Shifters and callipers

Question: do I definitely need to replace the mechs? I currently have a 105 10 speed setup.

Check your wheel set, perhaps there is a 11 speed freehub available. Also you could use a 11 speedCampag freehub if necessary as the Shimano 11 speed will work with it. I managed with my 10 speed wheels by removing a cog.
The front mech is needed because the lever arm is longer to match the shorter throw on the shifter. Obviously chain as well. Crankset will be OK, I am using a Sora 9 speed.
Rear mech needs to shift 11 speed so will need changing as well.
I managed to do it for £460, with about £190 to come back on saleable parts.

Thanks.
I'm not sure the ballache in changing out the hub is worth the effort, so if I do this I think I'll get a new wheelset as part of it.

Yikes, that's £700
I'll need to give that some thought, as that's a lot of cash to justify.
OP

Westbrooke does the Aksium for £145

Yeah, that all brings it down to £620
Still a wedge though, and I'm not happy with that wheel choice - would prefer the Kinesis V3 CX wheels which are £270.

Shame it's not really the sort of thing I can do in stages.
OP

leave out the cog on the cassette and do the wheels at a later date
You must log in or register to reply here.
Similar threads